On April 18, Program 2 of Alonzo King LINES Ballet at the Yerba Buena Center for the Arts‘ Novellus Theater featured two pieces: Migration and Scheherazade. Though Scheherazade was undoubtedly the main event of the night, Migration proved to be no less dramatic, displaying the full force of the troupe in an impactful performance.

The piece explores the “hierarchical migration of birds and mammals,” and depicts the struggles inherent to change/migration through dynamic pas de deuxs and solos. Zack Tang and Meredith Webster performed beautifully together, illustrating the push and pull that couples invariably go through during a lifelong journey. Though the company comes out as a “flock” at times, the individual performers are never fully in sync. The piece is an organic one–seemingly loose in its choreography–wherein each member’s individual migration across and above the stage melds into a powerhouse performance. 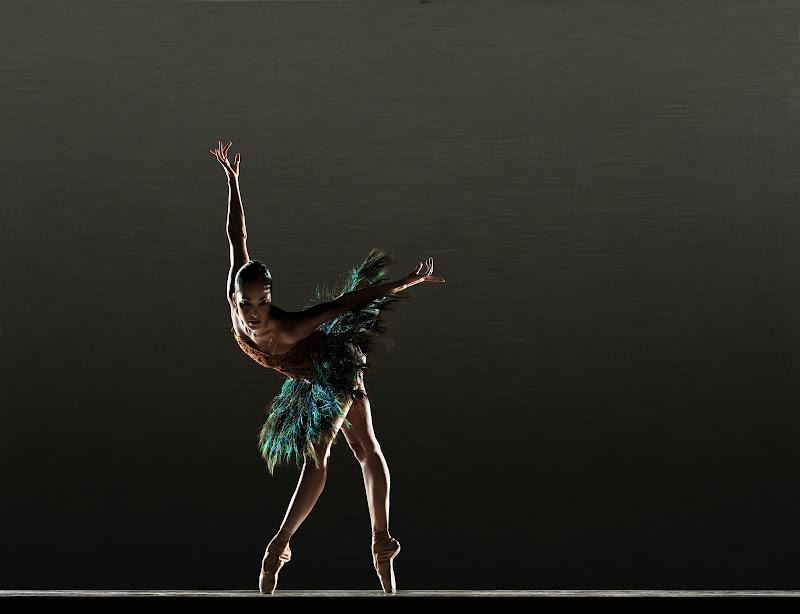 After a short intermission, the audience was primed to watch Scheherazade, a piece that was commissioned by the Monaco Dance Forum to celebrate the 100th anniversary of the Ballets Russes de Monte Carlo. This work was aurally and visually stunning. Zakir Hussain’s reinterpretation of Rimsky-Korsakov’s music seems to distill it to its most heartfelt parts, leaving the heft of the symphony orchestra behind in favor of a mix of Western and ancient Persian instruments–the combination is one that affects the listener on a primal level. Indeed, King’s version of this classic ballet trims all the fat from the production, turning it into a minimalist though still remarkably rich and textured piece of work.

King’s Scheherazade managed to take out any “exoticism” that would make you feel as though you were watching something from a foreign land. Colleen Quen and Robert Roenwasser’s sparkling costumes for the women and simple, flowing trousers for the men were dazzling, but were not stereotypical costumes that could be identified as particularly Middle Eastern. These costumes gave the production a timeless, global feel, and allowed the dancers themselves to dazzle the audience with their lyrical movements.

Rosenwasser’s set featured a backdrop of shimmering material that was highlighted to great effect by Axel Morgenthaler’s dramatic lighting design. A billowing piece of glowing fabric, reminiscent of a ship’s sail, hung from the ceiling, creating a dim, glowing dreamscape in which the dancers had their alternatively romantic/action-packed interludes.

In the retelling of this fantastical story, King and his company used these deceptively simple costumes and sets to immerse the audience completely in Scheherazade’s world, pulling the viewer in with beautifully executed movements that are rife with emotion. By putting a contemporary twist on this classic ballet, LINES has unequivocally succeeded in updating Scheherazade for the modern audience.

Alonzo King LINES Ballet will be performing Resin (reviewed here) and Scheherazade at the Joyce Theater in New York from May 8 to May 13.