In a venue of less than a thousand people, deep in the heart of a converted Freemason temple, St. Vincent unleashed a sonic fusillade that nobody present for the show is going to forget any time soon. The venue, Deluxe at Old National Center (formerly the Murat Shrine), is laden with the intricate mysticism of the Freemasons, and in a lot of ways is a perfect reflection of St. Vincent’s music style. Annie Clark, who goes by the stage name St. Vincent, has developed a unique sound over the course of three studio albums. These albums showcase the singer/songwriter blending her beautiful and delicate voice with dense collages of drums, synths, electronic effects and expert guitar work. 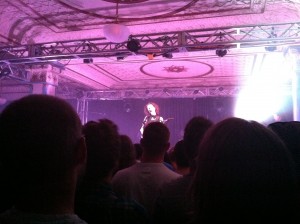 After a warm-up from the opening act Shearwater, a band that seems to be one breakout song from really making its presence known, Clark took the stage along with her touring band. Without introduction, they launched into “Marrow”, from 2009’s Actor. The song is a perfect distillation of what makes St. Vincent so great, with heavy guitar riffs and a pace that transitions seamlessly from the serene to the chaotic at a moment’s notice.

One thing about Annie Clark that may not come across in her cool, detached singing style is how enthusiastic and passionate she is about making music. On stage, she shines, singing and performing with a wide-eyed fury that captivates. She has a natural, welcoming charisma that, when coupled with her art school darling good looks, makes her irresistible to watch. When she paused for a couple minutes before one of her singles from last year’s Strange Mercy, “Cruel,” to tell a story about the music video she shot for the song, that charisma showed even more.

The show was furious and energetic, with the standout song of the set being “Black Rainbow”, which has a building sense of dread to it. Starting off with fragile woodwinds, the work culminated into a massive wail of strings, electronic groans and apocalyptic guitar riffs. The resulting wall of sound continued to build, layer upon layer, until the sound couldn’t get more intense. Then suddenly, the music dropped off into complete silence. Even after the song ended, where applause was in order, the crowd remained silent as the chaos subsided, finally erupting into thunderous applause.

Other highlights of the show included “Northern Lights” and the lingering drone of the night’s only encore, “Your Lips Are Red.”

Throughout the night, there was the frequent refrain from the crowd chanting “We love you Annie!” every few minutes. The audience did love Annie Clark, and that love was well-founded, because Clark gave them an intense and passionate show that is rarely seen. In a venue that forced intimacy and coziness, it was a love letter from Clark herself that will stay with us forever.