In recent years, interest in art in San Francisco has boomed to the point where the city now plays host to three art fairs. It all started in 2010, when the San Francisco Fine Art Fair was launched. Last year SFFAF was joined by artMRKT and ArtPadSF, both of which returned in 2012. They have divided the turf, so that each one of them would offer something different. ArtPadSF is the “sexiest” one, while SFFAF is the most “conservative,” and artMRKT is somewhere in between, but it leans towards the SFFAF model. 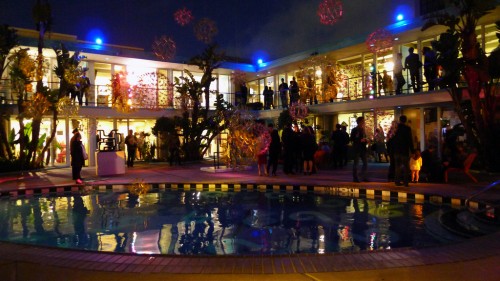 It has to be said that an art fair is not where you would expect to find groundbreaking contemporary art. The pulse of the art world beats elsewhere, and a fair is what it is–a marketplace–where artists and gallerists can promote themselves to earn a living. Smooth business here is key, so you won’t find artworks that are too provocative, too political, or tough to sell–no massive participatory projects, no video installations. Nevertheless, a good art fair should still contribute to the healthy cultural process–that is, exhibit not only edgy decoration and technological gizmos (which, sadly, is what many people take for “contemporary art” today), but also works that are intelligent and meaningful. Another function is to show interesting historical works. That is especially important in the case of California, because, as last year’s “Pacific Standard Time” exhibition series demonstrated, the Golden State is a treasure trove of amazing art, most of which remains underappreciated.

All three fairs tried to cultivate the community by organizing various talks and performances, as well as by honoring outstanding local artists. In artMRKT’s case, the spotlight was on photographer Richard Misrach, while SFFAF greeted viewers with a large display of complex, poetic, and engaged pieces by legendary conceptualist William T. Wiley. The problem with the fairs was that not much work on view could pack a punch the same way Wiley’s paintings did. I’m not talking about the level of skill, since the majority of the pieces were well-made and pleasant to look at. But the choice of them, the dealers’ overwhelming bias towards themes that have no connection to “the real world,” was disappointing. I am not saying that all art should manifest engagement, or point to the actual conditions in which people live, but the lack of such “realist” works was palpable.

Ubiquitous at the fair were abstracts of all kinds, collages with vintage illustrations, celebrity-based artworks, serene landscapes, paintings and drawings of animals, and tasteful pictures of beautiful ladies. Since ArtPadSF was targeted at a hipster audience, it also had a lot of pop surrealism, day-glo colors and gothic motifs. SFFAF had a noticeable presence of Asian dealers, who were selling work ranging from ceramics to contemporary pop art pieces. All in all, there were few blatantly inane works. A lot of the displayed pieces could acquire new meaning if placed in social/historical context within intelligently curated exhibitions. If you consider the archetype of “the artist” projected by the three fairs, you would envision something childlike, an individualistic being who has a rich imagination and a lot of inventiveness, but who shuns “grown-up” issues like the economy and his/ her own place within it. Of course, artists and dealers are free to do what they want, but let’s not think that the aforementioned artist archetype is all there is. With so many issues that need reflecting upon, such as globalization, the rise of the right-wing, “creative capitalism,” etc., it is to be hoped that the Bay Area galleries will be more sympathetic to artists who tackle such issues. 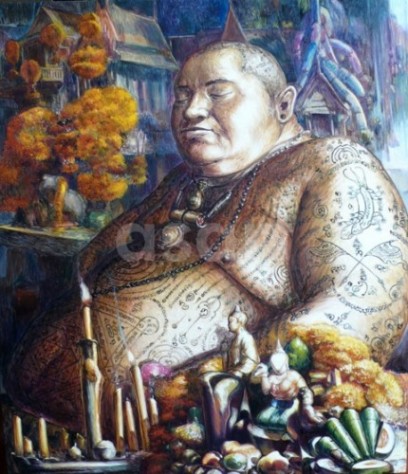 There were a few pieces that caught my attention. At artMRKT, San Francisco’s Gallery Paule Anglim was, as always, great, showcasing collages by Enrique Chagoya, Jess, and Bruce Conner. One piece by Conner, Ricky Williams and De Detroit at Mabuhay Gardens, July 11, 1997 was particularly insane: it was made of messily stuck together pieces of punk photographs or posters. Kudos also to David Lusk Gallery from Memphis, for bringing enigmatic and unconventional photographs by William Eggleston, and to Aperture Foundation from NY, for displaying interesting works by a number of contemporary photographers. At SFFAF the small and fragile works by Kat Flyn (George Krevsky Gallery, San Francisco) were impressive. In them, various ephemera such as souvenir New Orleans salt and pepper shakers were used to speak about racial inequality. Also, quite memorable were Virat Rungpayak’s paintings of immensely fat tattooed men in the midst of cornucopias (asart, London/ Bangkok). It seemed to me that at SFFAF there was a bit more “spiritual” and visionary art, which was good, even though such art falls outside the sphere of my interests. ArtPadSF impressed with a large amount of video art pieces (almost every booth had one), as well as the special showcasing of works by straight-out-of-school artists. The setting was also cool: the fair took place not at a convention center, like the other two fairs, but at a real hotel, where you could hang out by a pool in between visits to galleries (which occupied the hotel rooms).