On May 18 I was one of the lucky witnesses to GaNaDa, a performance by South Korean-born, Bay Area-based artist (and also professional vocalist, musician, and dancer) Dohee Lee. The event took place at SOMArts and was presented by Asian Pacific Islander Cultural Center and Asian Improv aRts. GaNaDa was a long and intricately crafted piece, which took the viewer down into a deeply personal realm. Lee claimed that the work (chiefly influenced by her native mythology) was a “cleansing/ purging ritual,” and the piece was structured like a journey, during which the artist inhabited a variety of female persona and presented several strong, resonating images.

The performance started unexpectedly in the SOMArts lobby, with a “prologue” that muddled the boundaries between theatre and ritual. To the recorded sounds of a voice counting quietly in Korean, the diminutive Lee came out right into the audience, dressed in white and donning an enigmatic mask. Her body movements were slightly Butoh-like. Studying the audience, the masked character had her hands doing an agile dance with huge knitting needles and thick white thread. All of a sudden, Lee approached an audience member and made a movement as if she were pulling something unseen out of his chest. It looked like she was capturing his soul or his energy. She did that with several other spectators, including (to everyone’s delight) someone’s baby. The “ritual” was mysterious and almost comical. 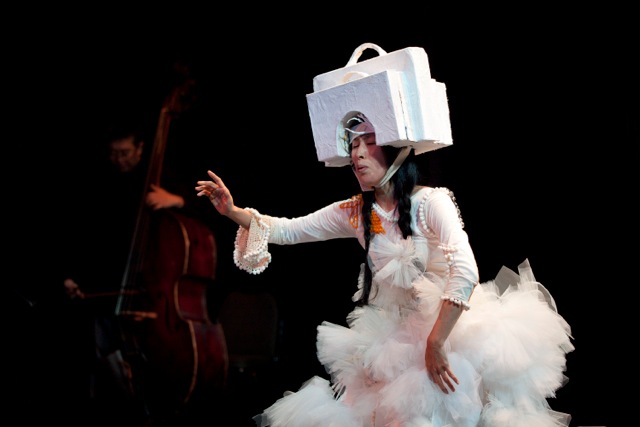 After the artist disappeared behind the curtain, we got an “official welcome”–a screening of a video in which Lee danced to GaNaDa’s theme song. Footage of her was interspersed with shots of drawings, which probably were preparatory to the piece. When the video was over, we moved into SOMArts’ little auditorium, where we took our seats. The most prominent decorative element on stage was an enormous white dress. It did look like a wedding dress, but it probably wasn’t, since the project didn’t seem to be about femininity or man-woman relations at all. It presented all of Lee’s characters as simultaneously feminine and universal. Flanked by musicians Adria Otte (laptop and violin) and Tatsu Aoki (double bass), she performed the first half of the piece as a curious frilly creature dressed in everything white. Her headdress was seemingly made of styrofoam, and extended over the back of her head to create a second mask-like face. Her outfit, as well as her catchy songs interspersed with more abstract music bits and vocalizations, made me imagine we were watching a performance in some future world, something like The Fifth Element. But there was also that lo-fi influence–the costume lovingly composed of scraps and pieces, the intimacy of the auditorium–a “poor,” salvagepunk feel. That might be the entertainment of the future: the cozy darkness of a little bunker, the audience enchanted by a cheaply constructed fantasy world. And enchanted we were. At one point, crude, garish, pop-expressionist animation came into the picture, projected on the enormous white dress. These projections of animated laughing mouths eventually chased Lee off stage, her hyper character wallowing in fear, as if her head was about to explode. Yes, GaNaDa as a whole had an invigorating dose of the absurd and grotesque in it. 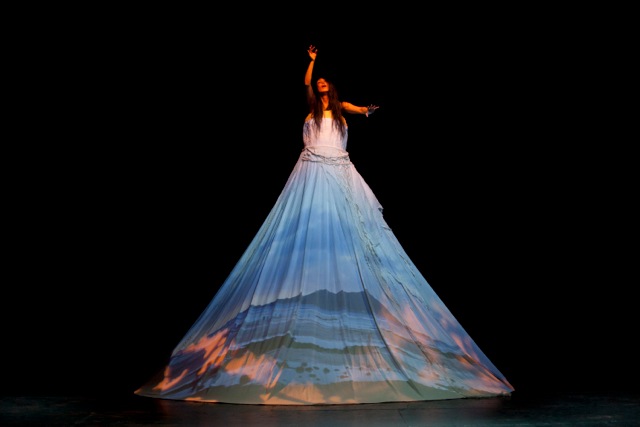 The next “act” had Lee, long disheveled black hair hanging over her face like a curtain, standing on a ladder behind the white dress/screen so as to look like she was wearing it. The dress had footage of an ocean beach projected on it, and Lee seemed to be hovering and embracing the land and the sky. This part of the piece created an extremely powerful image that stuck in my mind, of the force behind the world being an enormous sweating, swelling woman, almost about to collapse or explode due to the intensity of her work–but still going, living on, emitting tortured screams. When Lee finished singing, she spread her huge wings, upon which we saw more projected animated forms, some of which seemed vaginal, ovarian, umbilical, supporting the theme of “universal female.”

It looked like what Lee wanted to do with her “characters” is to drive them (and herself, through them) to the state of being overwhelmed. Her third and last persona was a glittery, sportswomanlike one, who attempted to transcend herself by manic drumming. With her, she had an army–the all-girl drumming trio Jamaesori. Their drumming performance was fascinating to watch and to listen to, but it was very long, and there was even a feel that it outstayed its welcome–but it was supposed to be like that, since GaNaDa was not a music concert to entertain the audience’s ears, it was performance art work, which aimed to be a ritualistic exercise for the performer herself. “Performance art” and “entertainment” are two separate fields, and even though they sometimes fly together, they are not supposed to be bedfellows–by the end of GaNaDa I felt that quite acutely.