The summer exhibition at the de Young museum is a family project. Local tech entrepreneur Trevor Traina, who owns all the photographs in Real to Real, is the son of Diane B. Wilsey, a wealthy philanthropist and president of the de Young’s board of trustees. The possibility of a conflict of interest should be noted, since shows at well-known museums tend to increase the market value of the exhibited works, should Traina choose to sell them. However, I’m saying this mostly on principle, as the majority of the works in Real to Real would, I assume, do great in the marketplace with or without the de Young. The show is packed with famous names, including those that regularly pop up on the “Top 10 Most Expensive Photographs” lists. For example, Real to Real features three large pieces by Andreas Gursky, who had one of his photographs sold for $4.3 million last year. There is also Diane Arbus, Nan Goldin, Cindy Sherman, William Eggleston, Jeff Wall, Robert Adams, and many other luminaries. All the pictures are top-notch, so the answer to the “Should I go?” question could be only a firm yes. However, the choice of the works prompts more reflection. 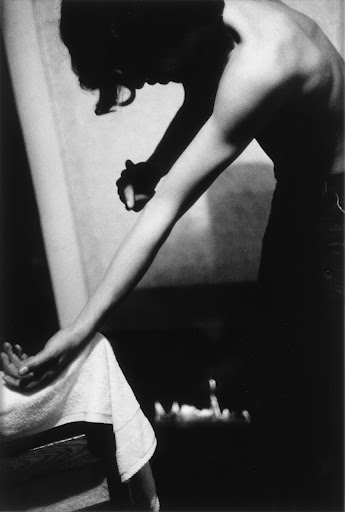 Virtually all contemporary artists use photo cameras, but Real to Real (and, I assume, Traina’s collection as a whole) emphatically focuses on those who made their name primarily in the photography field (with some exceptions, such as Mike Kelley). I first wanted to call the show “Famous contemporary photographers 101,” but then it dawned on me that a lot would be missing–there is no abstract photography, no works that “explore the photographic medium itself,” no photojournalism, almost no fashion photography. Instead there are many pictures of unidentified American suburban locales and “common people,” as well as intelligent critiques of American society. The exhibition’s name shows that Traina is attracted to “realism,” and the press release claims that the collection embraces “the documentary impulse.” I wouldn’t call the work on view “documentary” though–it is very artistic photography, whose concerns go beyond documenting specific places and events. The exhibition presents photography not as a means to an end, but an end in itself, and invites the viewer to think firstly of the qualities of an exhibited photograph as an art object, not about the facts it depicts. At the press preview, there was a lot of talk about the artists, their styles, their processes, and their ideas (as well as Traina’s passion for collecting), but I found that just thinking about the photographs’ subjects would yield interesting results, too. 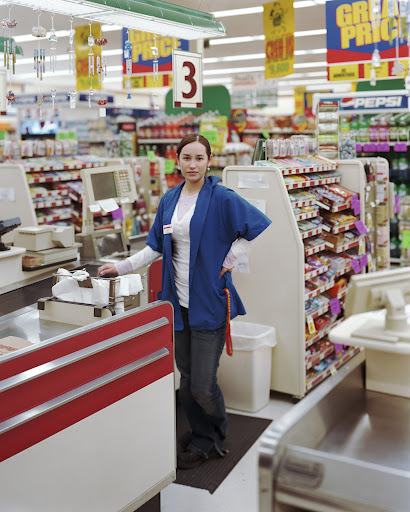 For me, the most eloquent works were Alec Soth’s large color image of a cashier girl in a brightly-lit supermarket (Dynell, 2007) as well as Robert Adams’s 1970s photos of miles of shacks in the American West. Those are deadpan, unemotional images that nevertheless have a damning feel to them. Looking at them I couldn’t help thinking about the unbridgeable difference between the worlds depicted and the world that Traina himself inhabits–the bankruptcy of the idea of the American dream. I wonder if the collector senses that irony himself, and it would be curious to know how he and his family relate to the subjects of the pictures. What does he tell his kids about the drugged teenagers in Larry Clark’s photos, for example? What was his motivation in buying those works, apart from Larry Clark’s talent and his images’ expressiveness? I’ll never know, although I have a feeling that knowing that would help us understand a little better how artworks function in our world.