When I visited San Francisco for the first time, then a very recent initiate into the world of art, I couldn’t imagine that in a few years I would be standing there in a former warehouse, watching a man in a creepy pockmarked red mask destroying adobe bricks. The man was the artist Rafael Esparza, and the bricks symbolized masculinity—in the Mexican town where he grew up, building adobes was a “hetero-normative coming of age ritual for young men.’” It was easy to guess that underlying this act was a conflicted, even traumatic relationship to “traditional,” patriarchal norms. Before breaking the bricks, Esparza walked around the space, got dressed and undressed, danced with rattles, and threw things into tinfoil “mirrors.” That was all his performance art work Casa de Adobe, presented as part of the “This Is What I Want” live art festival at the SOMArts cultural center (organized together with THEOFFCENTER and the Center for Sex & Culture). 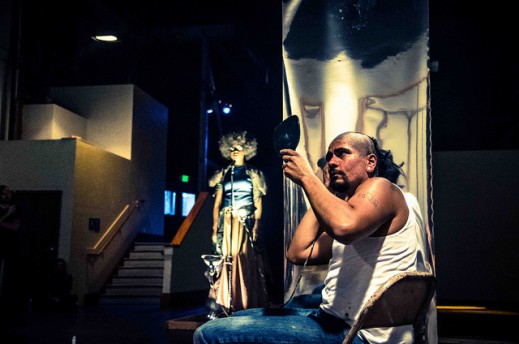 SOMArts’ director of communications, Jess, told me that Esparza’s piece was an “ambient” performance/ installation, therefore the audience could walk in and out whenever they wanted (not many did though). The viewers could simultaneously enjoy Filla Buster, dancer Taisha Paggett’s work in which she stood in the middle of that same space, donning a wonderful dress and afro wig, and moving very infrequently. As Esparza’s performance was heading towards its brick-breaking climax, Paggett started pattering out cryptic sentences all starting with the word “she,” ending with a harsh “Apologize! Apologize! Apologize!” In combination with Esparza’s symbolic destruction of his oppressive baggage, her last words sounded intense.

Ultimately those first two pieces seemed to me… mysterious. That was a specific brand of performance: hermetic, oblique and opaque, avoiding interaction with audience or clear messages (or any clear language, for that matter). What the artists did was impressive, but too abstract (in Paggett’s case) and too personal (in Esparza’s) for me to mentally “connect” with them through the performances. Maybe that wasn’t an objective at all. 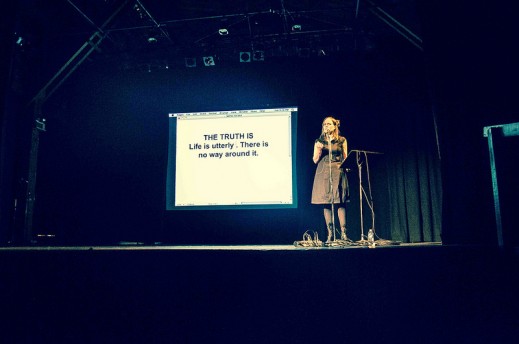 “This Is What I Want” was loosely themed around “the intimacy of desire through the lens of economy.” That theme is surely interesting and thought-provoking, but vague enough so that a broad range of works could fit the curators’ concept. While Paggett’s piece involved the economy of movement, Sara Kraft’s Truth++ seemed to be about the wastage of words. In the performance (or was it more like theater?) Kraft acted out the torturous process of finding words for an indescribable feeling towards someone or something. Her expressions ranged from the exalted “I love you so much! So much!” to the hysterical “I want to fucking kill you!!!” and “I don’t know, I don’t know what I’m feeling.” She was sampling her words, creating a veritable cacophony that in light of the piece being an imitation of the goings-on inside the brain, was quite nightmarish. Meanwhile, the screen behind her showed truisms like “Everything is for a reason!” or “You can change the world!” being typed and erased. Overall, the central feeling of the performance, that words sometimes end up being empty shells that court the real but fail to describe it, must be painfully familiar to most. As Sara Kraft writes in her statement, the desire she alludes to is the (unfulfillable) one to know and to control—to own the world with the help of language. 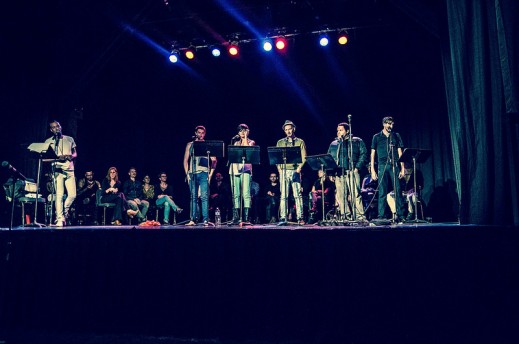 The last work, All This Love by Mica Sigourney, was much more straightforward in its relation to the concepts of “desire” and “economy.” Simply put, he tried to seduce the audience members into selling him their time in order to have sex with them. He tried to guide the viewers to imagine a tempting encounter with him, and enlisted several collaborators to read testimonies by his sexual partners (were they real? who knows), steadily raising the price he could offer for the viewers’ time. A few people, all girls, indeed signed the contracts. The performance was comic and cute, narcissism notwithstanding. Underlying the piece was the theme of sex positivity—a celebration of the space that the performers and the audience found themselves in, where people could talk openly, even matter-of-factly, about the fact that they have sex a lot and with many different people. The fact that such spaces are still a luxury didn’t really dawn on me until the next morning, when I read an article about the horrifying treatment of prostitutes by Russian police officers. “You’re not women,” the cops/thugs used to say to the sex workers. “You’re not even human.” This chilling equation of “indecency” with inhumanity comes to us in seemingly more “civilized” guises, like Rush Limbaugh’s implying that if a woman is a “slut” (i. e. wants to have sex for a purpose other than procreation), her words, experience and opinions don’t count, they must be devalued. So the whole sex positivity aspect of Sigourney’s performance should not be considered peripheral. In a way, his and Sara Kraft’s pieces redeem the facts of life that today’s ultra-masculine culture devalue: for him it’s polysexuality, for her it’s weakness, failure of language, and hysterics. The “want” they seem to articulate is for a more equal, accommodating common space.