San Francisco’s SOMArts has a strong program of queer performances: it organizes monthly events like “The News” and festivals like “100 Performances for the Hole” and “This Is What I Want.” It usually presents a broad spectrum of work–not only performance art per se, but also pieces bordering on theater, dance, cabaret, burlesque, etc. The third iteration of “This Is What I Want,” a live art festival focusing on the problematics of desire, was such a hybrid event. 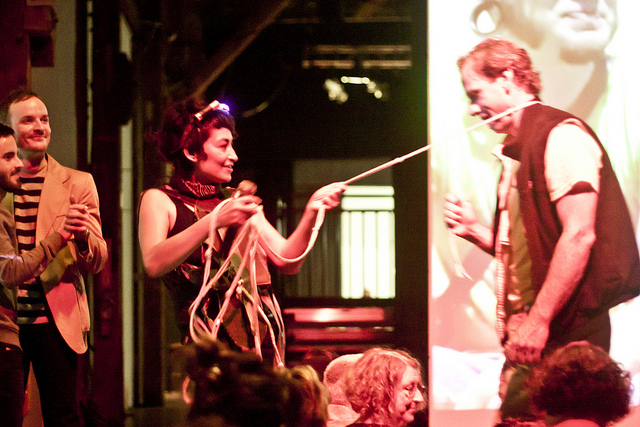 The second bill (read about the first one here) started with an interactive performance by Mabel Negrete. The desire she expressed in her work was for refuge, “rest and love,” and sometimes the piece felt like a therapy session. She paired a video narrative about meeting people and exploring abandoned houses with actions like throwing nets and ropes over select audience members, inviting people to slow dance, and asking everyone to imagine a “fire burning everything inside you.” 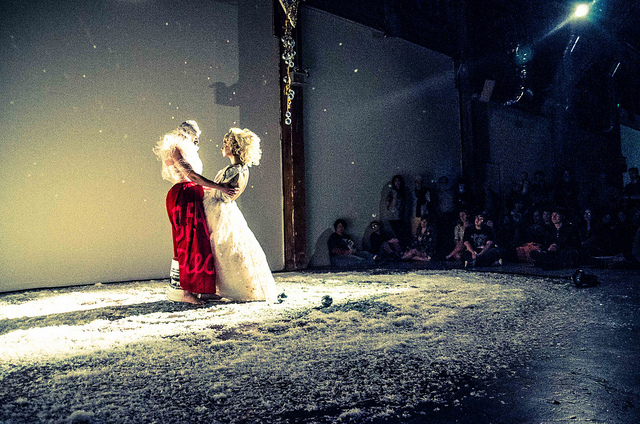 This year’s theme was the relation of desire to economy, and I can see how Negrete aimed to symbolically counter the spectrality of exchanges under contemporary capitalism with direct, benevolent contact. The next performance by Dia Dear looked at the theme from a different angle, as it was dedicated to the grotesque–that which is “so reviled that it has no positive value, no social or sexual currency, no place in an economy of desire.” (This radical setting of the grotesque against the dominant social order actually got me on a thinking rampage. It seems to me that the concept of “the grotesque” is actually the lifeblood of every ideology, including the capitalist one, since the promotion of something as “the dirty Other” reinforces people’s determination to strive towards “the ideal.”) Anyway, Dia Dear’s piece was pretty disquieting, and it would be hard to find a group that would find “social value” in some actions that Dia Dear’s character performed. Dressed in a “glamorous” dress made out of throwaway materials, they unleashed their obsession on a blonde mannequin, first demonstrating adoration, then turning violent and “raping” the doll with their hand. The performance (which, mind you, was exceedingly beautiful and set to love songs) posited “the creep” as one of contemporary culture’s primary antiheroes, and mimicked the simultaneous seductiveness and repulsiveness of maniacal violence. 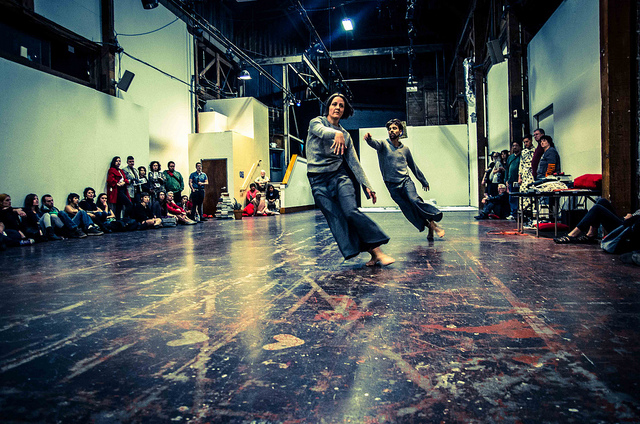 In the next two performances I detected a yearning for a public sphere that would be more inclusive of experiments. When I watched Nick + James’ piece, it was hard not to think that this was exactly what NEA-hating conservatives imagine “evil contemporary art” to look like. Two dancers, a man and a woman, dressed in perfectly unisex clothing (in skirts, no less), moved in unison to a decidedly a-musical live soundtrack of amplified scratches, scrapes, and bodily sounds. In addition, there was the character of a “spectator,” another performer who lay on the floor naked except for a quasi-Roman toga and smiled at the dancers lecherously. But the “unison” and “unisex” part would probably be (in our individuality-obsessed culture) the most scandalous. It made me recall the words of legendary performance artist Genesis P-Orridge, who spoke about the desire to overcome individuality and ego for the sake of unity (he and his wife underwent plastic surgery to look like each other). However, according to Nick + James’ statement, their attitude towards basing their dance on replicating and remembering someone else’s movements is ambivalent at best, and they question this strategy’s potential for liberation. 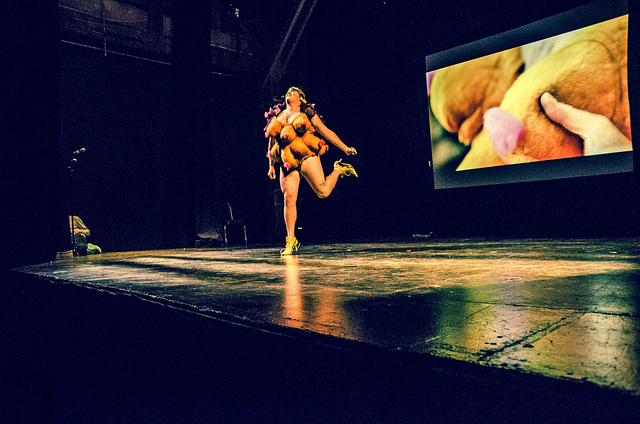 Finally, DavEnd’s performance, the last one of the festival, took the form of a mini-concert and a fashion show, in which the artist’s collaborators presented outlandish outfits. Like Dia Dear, she pointed to what is excluded from the norm–in her case it was not the grotesque, but the ridiculous. One of the performers, for example, donned a costume made out of felt boobs, while another had an orange and green knitted frock that was revealing and childish at the same time. Looking at the bold display, it was hard not to wish more people would roam the streets in weird clothes in broad daylight. That was my own little desire that night.