With a name that acts as an acronym for “Fuck It Dog, Life’s A Risk,” it’s no surprise that the lo-fi skate punk band FIDLAR owns a catalog of songs about debauchery and getting messed up without any concern or worry for repercussions. Self proclaimed slackers from Los Angeles, the four kids in FIDLAR make music for their peers— kids who are broke, lazy, under the influence and who don’t give a damn (or wish they didn’t give a damn) about what’s expected of young boys and girls. FIDLAR found that crowd at Bottom of the Hill last Wednesday. 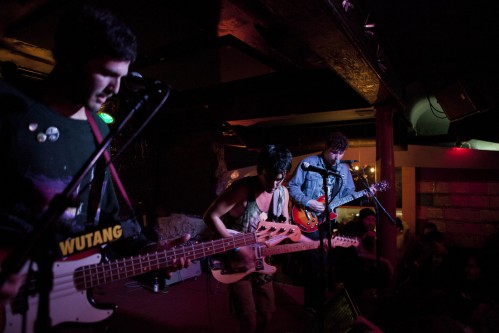 The last time I saw the band play was at Slim’s, where FIDLAR opened for punk veterans Off!. The crowd was largely divided between older punk rockers who were disinterested in FIDLAR and young teenagers who, given their ages, couldn’t party to the extent of FIDLAR’s music and therefore idealized notions of cheap beer and rehab. In contrast, Bottom of the Hill was packed with 21 year-olds who came together to party with the next big party band. 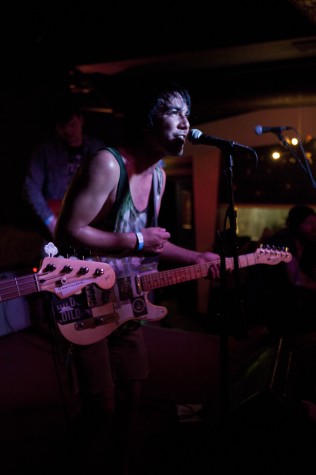 Looking like a bunch of misfits I went to college with, FIDLAR took the stage and quickly had the venue screaming “I drink cheap bear, so what? Fuck you!” as it opened with “Cheap Beer,” an ode to the less finer things in life. The better half of the crowd immediately broke into a mosh pit that had photographers like my friend Bryan clinging to their expensive appendages as the audiences thrashed around, sending bodies up to crowd surf before they tumbled to the ground.

As the band made its way through its small but abrasive repertoire of songs, the crowd was a constant sea of flailing limbs and head bangers who, despite their violent tendencies, maintained a constant sense of mosh pit hospitality. Even as FIDLAR broke into “No Waves,” the lead single off of the band’s new 7-inch and an obvious crowd favorite, each time I saw a person knocked to the ground they were scooped up and steadied before they could be trampled by any unassuming dancers.

Matching the crowd’s energy and sense of community, the band accepted every shot of whiskey that came its way while lead singer and guitarist Zac Carp kept the energy casual with banter about the benefits of a San Francisco crowd versus audiences he’s faced in Texas. Through versions of “Max Can’t Surf” and “No Waves,” FIDLAR created an atmosphere devoid of any outside responsibilities, worries or even a sense of time with its raw lyrics, lo-fi fuzz and snappy guitar riffs. During a raucous version of “Wake. Bake. Skate,” a quick-fired track that chronicles the day to day events of being stoned, cheap and unemployed, the band projected its untroubled nature so viciously onto the audience that a Bottom of the Hill employee had to throw out some guy who fought his way onstage and back flipped back into the crowd. By the time the band looked ready to leave the stage, the audience protested with belligerent requests for an encore. Exhausted and satisfied but out of material, FIDLAR responded with its version of Blink 182’s classic youth anthem–“Dammit.” The energy in the venue at that moment sparked reminders to many of the twenty-somethings in the crowd of their first taste of punk music. 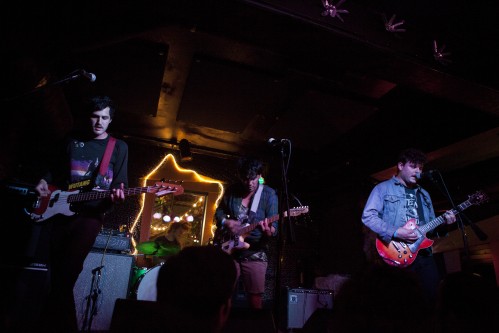 Punk rock offers a different, rawer form of abandon than indie rock or folk music for example, as the lyrics don’t mean quite as much as the do it yourself ethic does, and FIDLAR fully embraces that mentality. The whiskey-soaked show proved to be a release of organic energy, for the band as well as the crowd, worthy of all the hype that surrounds the band’s live shows. There has always been an audience for the type of music FIDLAR creates. The band represents an uncontrolled mentality and frustration, or lack thereof, for the way things are. It represents a generation that, like so many before, is turning (or wishes it would turn) a blind eye towards a bleak future and the preconditioned responsibilities set out for it.

Though the longevity and trajectory of the band’s music has yet to be determined, FIDLAR played the best show I’ve seen in months and reinforced my belief that, as long as I take care of business during the week, it’s not only okay to be reckless sometimes but it’s also good for the soul! As I walked out of Bottom of the Hill, still sweaty, freshly bruised and fully appreciating the cool San Francisco air, I felt like I had just run a marathon. FIDLAR is due to release its debut LP later this year, so catch a show while the band is still playing small venues and house parties packed with drunk people. You won’t be sorry.