On August 11, San Francisco’s ODC/Dance company said goodbye to one of its main stars, Daniel Santos. The Filipino American performer has been a frequent show stealer, whose technical excellence is matched only by his wild energy. Santos shines in duets, so it was no surprise that the farewell event included two of them–with Jeremy Smith (as part of the work called Cut-Out Guy) and Vanessa Thiessen (Part of a Longer Story). Both pieces emphasized the departing dancer’s remarkable ability to convey passion through movement. 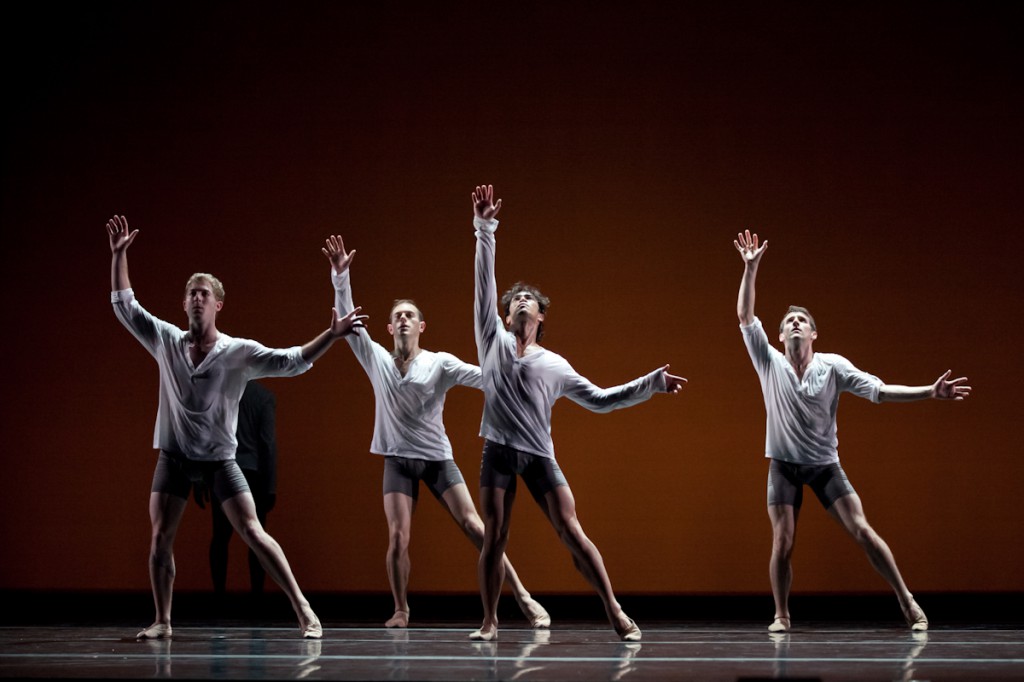 Cut-Out Guy, which premiered at the Yerba Buena Center for the Arts last spring, touches upon the intriguing topic of physical (not necessarily sexual) intimacy between men. Notably enough, the all-male work was choreographed by a woman–KT Nelson, who claimed that the movements were inspired by wrestling. When she watched her son and his peers practicing that sport, she was impressed by their toughness and vulnerability. Cut-Out Guy plays with this contrast, not only on the level of movement–mild aggression and buoyancy give way to gentleness–but also on the level of “look.” The dancers’ muscular bodies are packed into vaguely infantilizing outfits–white shirts with too-long sleeves and grey boxers. Those awkward undergarments make the viewer think either of little boys in a playpen or human-size paper dolls–vulnerable, malleable figures, wholly in the power of another. You can dress them as you wish. Cut-Out Guy allows you to feast your eyes on strong and flexible male bodies and at the same time watch stereotypical masculinity being deflated, transformed into something else. What might this “something else” be? In Cut-Out Guy I discerned a yearning for the world where physical interactions between men would not be a taboo. The feeling of a gaping void was underscored by the soundtrack–very dramatic, pompous music by Ben Frost. Watching the piece, I thought that the music fit the dance perfectly, because both were unbelievably tasteful. Cut-Out Guy‘s constant innuendos that never led to full-blown homoeroticism were supplemented by Frost’s evocations of extreme music (drone, noise) that teased the senses but did not really deliver a masochistic catharsis. 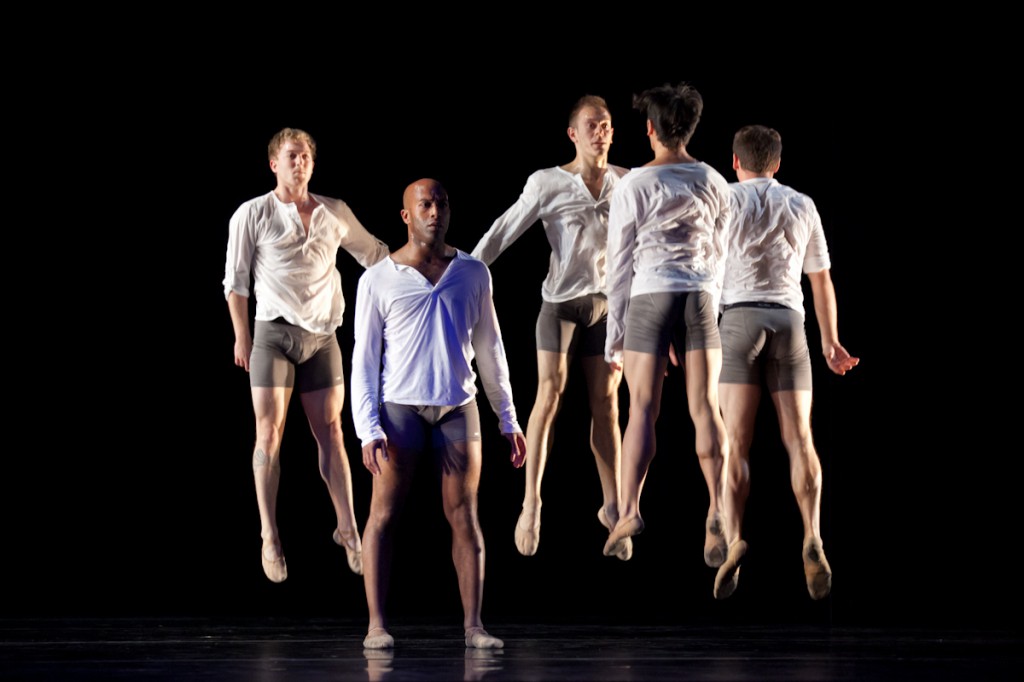 The other two pieces in the show, Unintended Consequences: A Meditation (2008) and Part of a Longer Story (2006), were choreographed by ODC founder Brenda Way, and featured both male and female dancers. Unintended Consequences was set to quirky Laurie Anderson songs (including the famous “O Superman”). The interplay between the organic and the machinic in her sound was echoed in the dance, which featured both fluid and robotic movements. The work had something in common with the classic ODC piece Raking Light (1999), which also had an “anti-humanist” quality. While the performers’ movements in Raking Light made me think of atoms and molecules, in Unintended Consequences the dancers often seemed to use each others’ bodies as if they were objects. 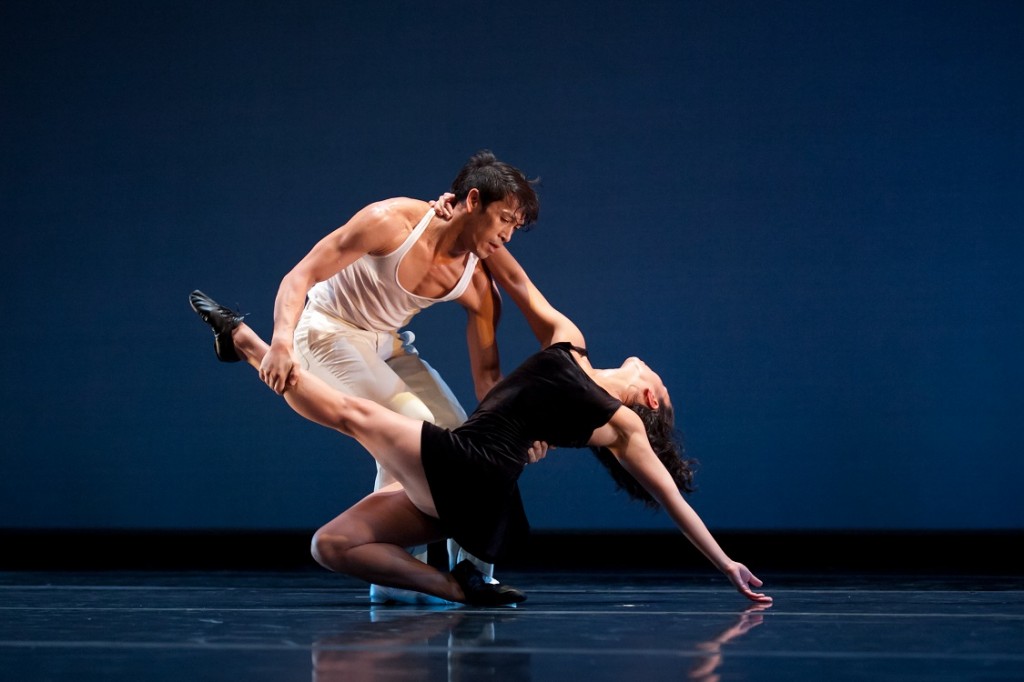 Part of a Longer Story was the quaintest of the three. It even had Mozart’s famous Clarinet Concerto in A Major as the musical accompaniment. The first half of the piece had all of the dancers (girls in black, boys in white) demonstrate their prowess, while looking at the audience and smiling broadly. Those jubilant smiles even made me suspicious for a moment: might the piece be ironic or even sarcastic? But no, after “presenting themselves” most of the dancers fluttered away, leaving only Santos and Thiessen on stage–and those two earnestly acted out a passionate love story in dance. The work was beautiful and self-consciously crowd-pleasing, but I found it just too lovely.

While ODC’s works might not be the most thematically brutal around, the company’s choreographers and dancers always have something that will keep your mouth open. Therefore watching their performances is a joyful experience. On an unrelated note, the dancer Jeremy Smith looks exactly like the singer Peter Murphy from the band Bauhaus. What’s up with that?