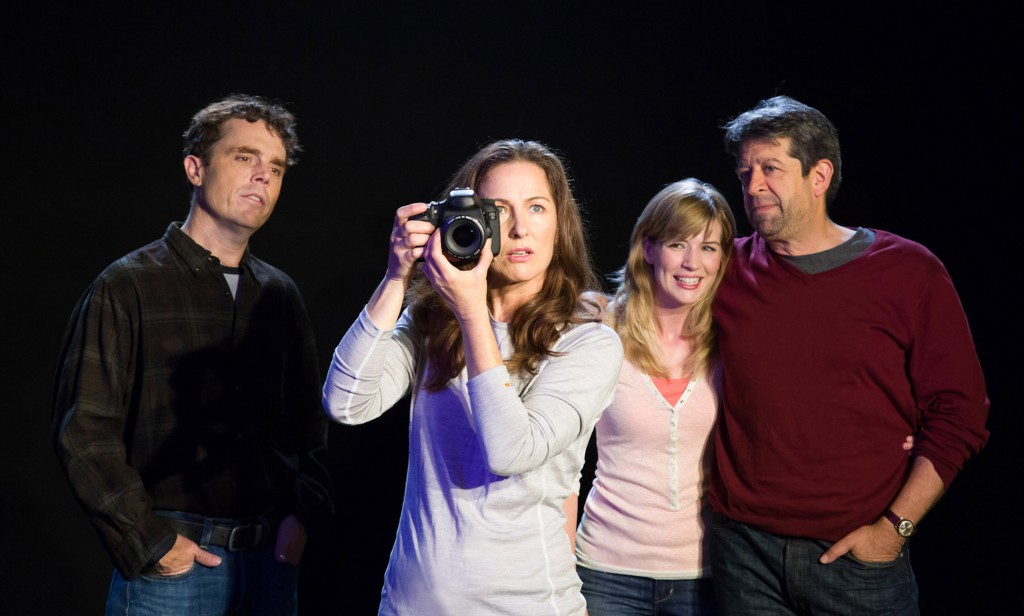 Saxon, whose credits span everything from award-winning work in London’s West End to voice acting for the award-winning adventure game, Broken Sword, was kind enough to share his thoughts on the theater and Time Stands Still with me in the following interview. The excitement that he expressed regarding the production of this play was simply infectious. As Saxon suggested, it would be wise to book tickets sooner rather than later.

Time Stands Still is your second Margulies play. What draws you to his works?

Oh yeah, I love his work. I think he’s a wonderful playwright. His use of language, his knowledge of character, the interactions of the characters – he deals with characters that are close to my age, close to my understanding. There are just some playwrights an actor resonates with, and Mr. Margulies is one of those. 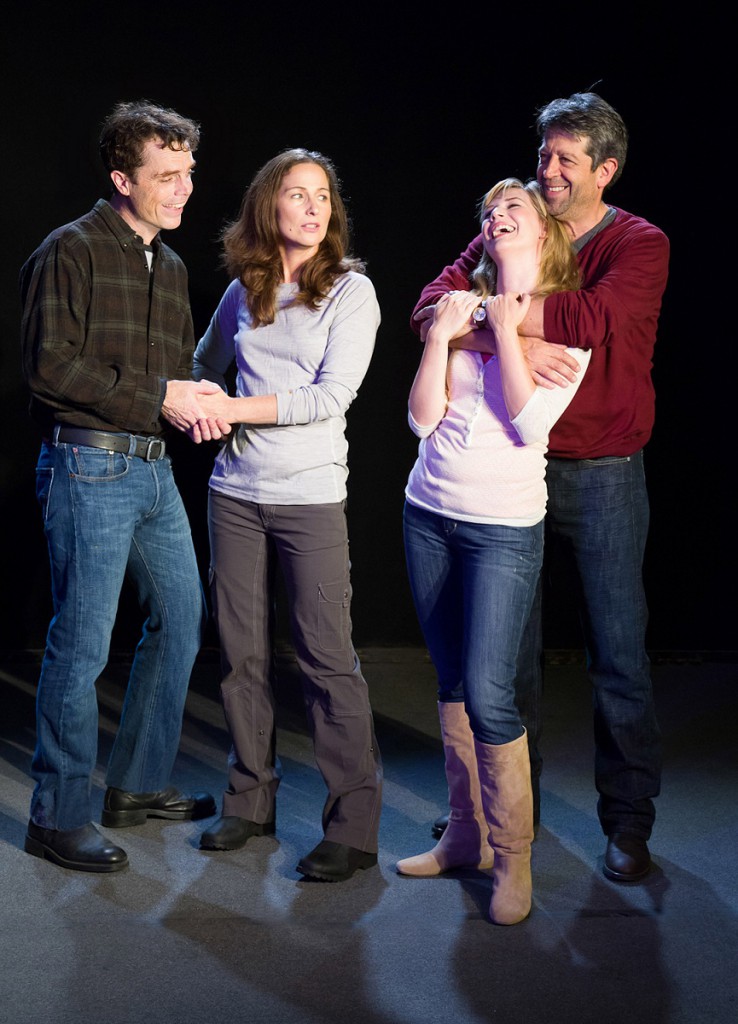 Was there something that attracted you to playing Richard?

Not specifically, no. I love the character, Richard, I love the circumstance he’s in. The character is interesting. He’s somebody who’s very unlike me, which is always something I like. Sometimes you read a play, and you just really like the whole ambiance, the whole feel of it, and that’s very much how I feel about it. Dinner with Friends was the first piece that I did of his – I did the British premiere – so I had the great good fortune of having him work with us for three weeks. He came over.

It was fantastic – he’s just a sweet man, a really nice man. It was just a lot of fun.

Time Stands Still touches a bit on the relevance of theater. Can you share with me what you think the importance of this play, or of theater in general, is to society nowadays?

Now the specifics of this production are too long to go into at this particular point, and would sort of give the game away. I don’t want to tell what the end is, and what happens, and without doing that, I can’t really speak directly to the relevance of the piece, other than it is a very topical story, in one sense, in that it involves photojournalists going places that most human beings don’t experience. These people do [experience war], but not as combatants, as observers, and that presents its own very special form of difficulties. One is a photojournalist, one is a journalist, both deal with war zones and troubled areas, and this is sort of what happens to them. Fictional characters of course. And so, it’s interesting because it investigates an area that most of us don’t know very much about, I certainly didn’t, but that’s up to the audience to decide, as with each individual play.

What relevance does theater have to society in general?

People have written libraries with books on that particular subject. Generally, I think theater is a way of storytelling and communicating broad things that affect us all. We, in this century, or during the last century, were blessed and cursed with television and film, which is a very different way of telling stories. Theater, for me, engages an audience much more viscerally. It’s something that the audience can’t just sit and observe – the audience actually has to participate. Whereas with film and television that is sometimes the case, but oftentimes it’s a very passive form of receiving information. With theater, it’s much more active, much more activity is required from the audience member. Theater, when it’s good, either makes us laugh or think or cry, or in some way touches our lives, hopefully in ways we weren’t expecting, hopefully in ways that are positive, and hopefully in ways that are ultimately enjoyable. And enjoyment, knowledge, learning, engagement with others, that’s the stuff of life, as far as I’m concerned, and theater is a great tool for that, I believe. And now the sermon is over. [laughs]

There’s quite a bit of tension in this play, but there are also some funny moments. Are there any funny moments or favorite anecdotes from rehearsal that you can share with us?

This is a pretty dark comedy, there’s a lot of funny things in it. A lot of funny things in it, but the overall premise of the piece is pretty harsh, so that also I like. You don’t have just something that’s all doom and gloom, nor do you have something that’s all light and fluffy. So you get a combination of the two, and for me, that’s a very complete night at the theater.

As for funny anecdotes during the show, there’s been a lot of them, But every time in the past I’ve ever tried to say “Oh and this happened,” I’m met with a stony silence. It’s funny to us, but when you try and relate a story, people are lost, people are like, “What the heck is he talking about, that wasn’t funny at all, that was kind of dumb.” So the funny anecdotes, I won’t go into, [laughs] but it’s been a lot of fun during the rehearsal, I mean, we’ve laughed a lot.

Well that’s the mark of a tight-knit group, I’d say. That would be really fun to watch on stage.

I think it will be. I think we’ve got a pretty good show. 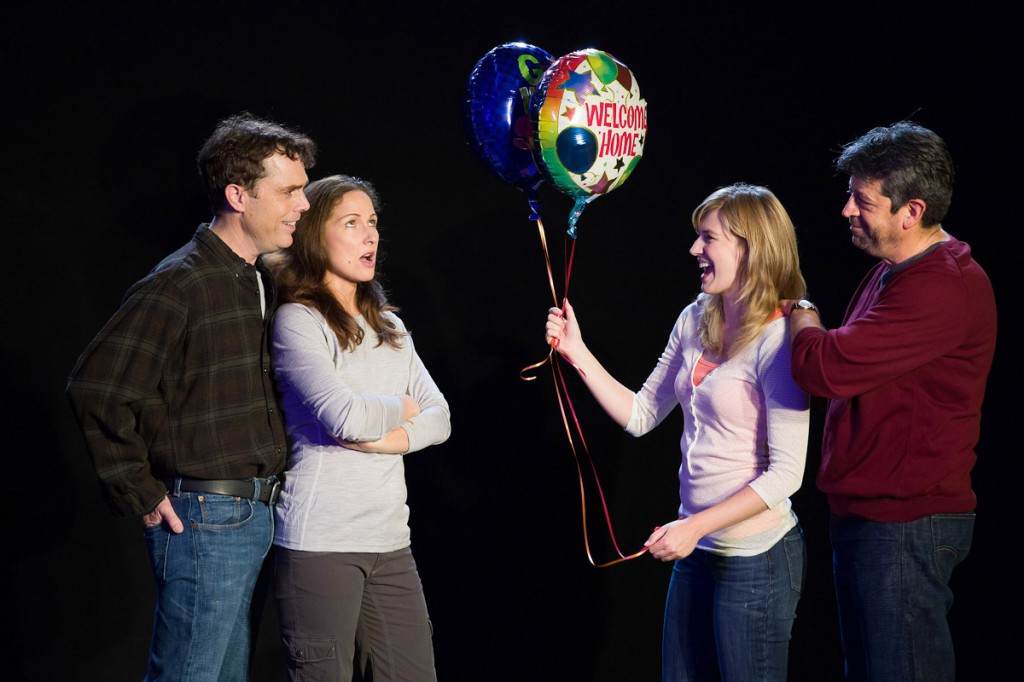 How would you describe your relationship with the cast and director?

Although I’ve never worked with Leslie before, as a director, I’ve known Leslie for a couple of years now. She originally cast me, my only time here before, in The Chosen. And she is one of the directors that I work really well with. I like her style very much. She does an enormous amount of prep work, so she’s very well prepared. She has no ego when she works, whatever you bring to the game, she loves to see it. And she lets us experiment and play around, she offers suggestion without being dictatorial about it, which is fabulous. And the cast here as well, is superb. There’s only four of us, and that can oftentimes be a real blessing, just because you guys get to know each other, and that’s what’s happened this time. It’s been a lot of fun. And they’re really good too, although don’t ever tell them I said that. [laughs]

I just returned from the UK where we did a production of The Resistible Rise of Arturo Ui, and that looks like it’s going to transfer to the West End in January, so I’ll do that. I’m waiting to hear on a project here which I won’t talk about until I know more about it, and the fifth Broken Sword is supposed to be happening this year as well, so there’s a few things in the pipeline.

Time Stands Still runs from Wednesday, August 22 to Sunday, September 16 at the Mountain View Center for the Performing Arts in Mountain View, California. To order tickets, visit theatreworks.org or call (650) 463-1960.