Last Sunday, El Rio hosted a night of good old fashioned rock and roll. I’m talking about loud, guitar-driven, blues-inspired tunes that ring more sinister than indie rock and more pensive than punk. Surrounded by friends and friendly Sunday night bar goers, the San Francisco-based outfit Down and Outlaws roamed the venue, waiting for its headlining set of the night. With time to kill, and the opening acts Foli and Cab 20 sound checking their instruments, I sat down with the four guys of Down and Outlaws—vocalist and guitarist Peter Danzig, bassist Chris Danzig, drummer Jason Jones and lead guitarist Kyle Luck—to talk about their sound, influences, future plans and David Bowie. 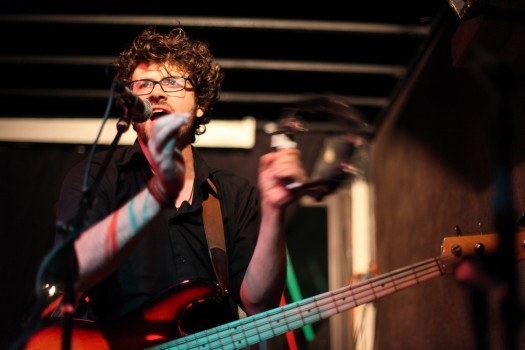 Only a few months old, Down and Outlaws only came together this past July. Brothers Peter and Chris had played in a band before and teamed up with Kyle, whose band had just broken up. Once they found out their friend Jason, also the front-man of Romancer, could play drums they added him into the mix and started jamming from there. Jason explained, “We’re all friends and have known each other for a while. So it’s a really solid, easy thing. No awkwardness.”

When it came time to naming their new project, the guys kept coming back to Down and Outlaws. “We wanted to find a name that more or less encapsulated our vibe,” said Peter. “And we wanted it to be semi-witty, and we all kind of felt down and out at the time.” They all agreed Down and Outlaws was memorable, and Chris noted, “It’s not stupid or punny, unnecessarily, so it’s not a joke name but it’s not overly serious.” Jason also added, “The sound is very fitting. The edginess fits in really well with ‘Down and Outlaws,’ kind of bluesy, western kind of vibe.”

Down and Outlaws’ blues-rock sound comes from a multitude of different influences, so when asked what their favorite acts were as kids, it was no surprise that everyone’s answers varied. Peter grew up listening to classic rock and roll, much like his brother Chris who hails Tom Petty as his deity and his biggest inspiration for bass as John Paul Jones from Led Zeppelin. Jason listened to everything from classical symphonies to 90s hip-hop and R&B until he was finally introduced to rock music with Deftones. With a predisposition for metal, Kyle listened to guys like Slash, Dimebag and Zakk Wylde, and is most influenced by Mike McCready from Pearl Jam and Jerry Cantrell from Alice and Chains.

As far as what kind of music they’re all currently listening to, Peter is into more of the psychedelic sound, including Black Rebel Motorcycle Club, an act all four members agree is one of their favorites. Chris is into the more mellow folky sounds of Decemberists and Bob Dylan, while Kyle digs Pack AD, a garage rock duo he described as “kind of like the Black Keys gone wrong.” Jason praised the new Girls album, Father, Son, Holy Ghost, and also threw out David Bowie‘s name as an obvious source of inspiration.

A band of four songwriters, Down and Outlaws has no distinct songwriting process so far. “Sometimes one person brings the majority of it to the table and then we fill it out,” explained Peter. “Other times we all just kind of jam a song out and write lyrics accordingly.” When talking about the process for writing “Backwards from the Dead,” Kyle described how simple it was: Jason started playing a drum beat, followed by Peter strumming E chords, and now he believes, “It might be our strongest song because we all four wrote it.” Collective songwriting seems to be the band’s most successful formula, so the group intends to use the communal method for future material. “Going forward it’s going to be more of that, more of a collective hive mind kind of idea,” said Jason. “Since we all understand the aesthetic we’re going for now, its really easy for us to kind of weed out things that are too much, unnecessary or just not quite up to snuff. It’s a lot easier for us to kind of come in, I mean the fact that we’re all super comfortable with each other is already really cool, so we just come in and just play and then its like, ‘Oh whoa remember that, that was good! That was good. Let’s work on that for a little bit.'” 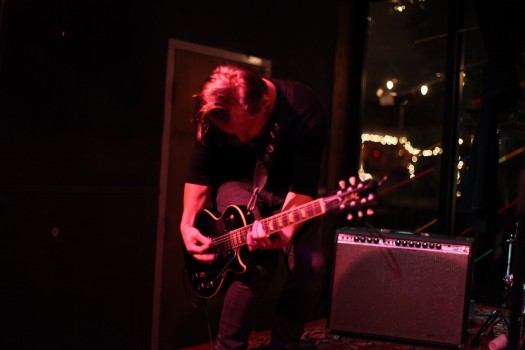 Down and Outlaws is taking a break from the show circuit to record its first EP, which will hopefully be out by the band’s Bottom of the Hill show at the end of December. In the meantime, you can listen to the band’s demo on its Facebook page, or catch its acoustic set at Hotel Utah on December 20.

To wrap up our conversation, the guys talked a little bit about what’s going on in the San Francisco music scene right now. Kyle believes, “There’s more of a community than there was three years ago. I think in the last three years bands have been more friendly. Everyone’s making friends and everyone’s playing shows together. You start seeing the same people at shows.”

Inspired by the fact there is no specific San Francisco sound, Chris likes that you can play any type of music here from psychedelic to folk, or country to blues, and people won’t reject it for not being “San Francisco” enough. “If you’re good, you’re good,” he explains.

Peter named Sleepy Sun as one of the best bands happening in San Francisco right now, and calls the saturated music scene here both a blessing and a curse. “It’s a lot harder for people to pay attention because everyone sees so many bands” he said, “But that’s cool because there are so many other things to feed off of.”

As for Jason, he’s not content with the current state of the music scene and believes that, “As saturated as it is there’s still one area that can very much be capitalized on. I don’t know how or by who but I know that for myself, as a musician, and as someone who loves music, I’m not satisfied with what I hear going on in San Francisco.” He vows to either do it himself if no one else will. Perhaps after Down and Outlaws records its EP, he’ll have found what he’s looking for. 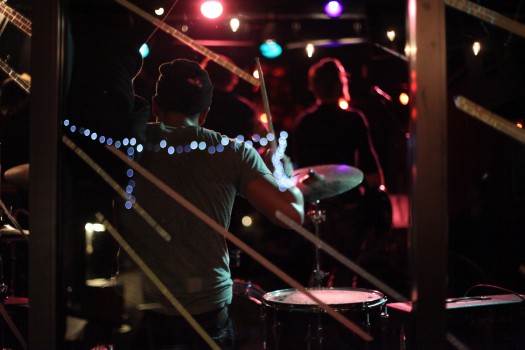 Between comments about Chad Kroeger’s crotchless leather pants collection and detailed folklore on the mystical life of David Bowie (“Bowie” word count: 11—not bad considering he owned the conversation for about five minutes), the four gentlemen of Down and Outlaws spoke with a clear vision of where their band is headed. With a multi-faceted drummer who will hopefully be contributing vocals soon, a bassist who understands the commanding power of an intro bass line, a razor sharp metal-influenced guitarist, and a lead singer who lends the band animalistic textures by switching between his raspy croon and deeper growls, the band owns all the pieces necessary to create true-to-form rock music, free of any filler and without the help of a computer.

After some experimental soul from Foli and a spirited indie garage-rock set from Cab 20, Down and Outlaws kept the volume up but laid down a rawer tone to close out the night. After a set of commanding vocals, shredding guitar highlights and onslaughts of drums, all projected through a harmonica-infused blues filter of singing guitars and bass, the band ended the show with what Kyle described as the band’s strongest song yet, “Backwards from the Dead.” An archetype of Down and Outlaws’ sound, the song owns the same mysterious, wandering qualities that define the band’s overall set and quite honestly, the band itself. Maybe because the band’s entire career is still ahead of itself or because it maintains such a calculated cool on stage, but there is something mysterious about Down and Outlaws, from its name to its sound. There was an obvious vitality simmering just below the surface of the band’s set, and listeners should be looking forward to hearing that unexplained but palpable energy fully realized on Down and Outlaws upcoming EP.

All photographs by Joo-Joo Ashworth

Down and Outlaws Official Tumblr