All Photos Courtesy of Erin Dage

A typical musical scenario: an aging band plays new material from a recent release, forsaking the older material that put it on the map; fans become disheartened.

However, that was not exactly the case at Monday’s Wire show at Slim’s. Sure, the band primarily played material from its newest release Change Becomes Us (Pink Flag, 2013), instead of its revolutionary debut album Pink Flag (Harvest, 1997). The audience of aging post-punk enthusiasts with graying hair and sprite millennials, seemed ultimately receptive to this.

The band ripped through its set which contained a good amount of Change Becomes Us tunes, except for one encore. The mood was lax, but with intermittent slam-dancing from some of Wire’s more raucous numbers.

Yes, Wire didn’t play well-known jams such as “Mannequin,” “Three Girl Rhumba,” or “12XU” –but it didn’t need to. Wire is much more than just a band that had a few hits back in the day. Wire is an institution with decades of solid releases that doesn’t need to win over an audience with a few crowd favorites. 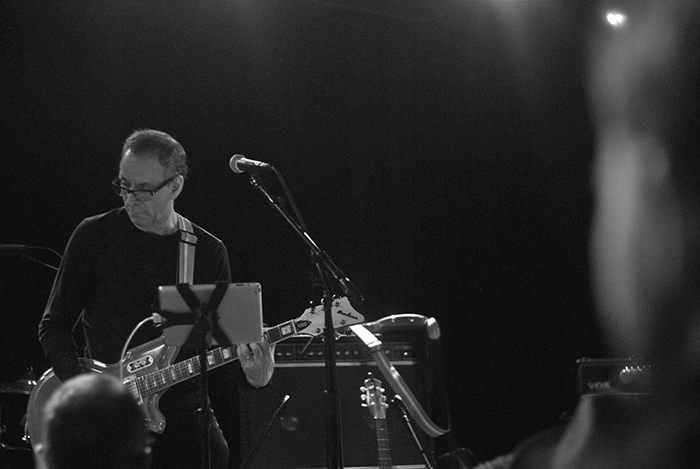 All too often do older bands get roped into almost exclusively playing the material that made them great. It’s good to see that Wire has defied this cliché, encapsulating the title of its latest release, showing that change really does become those aging art punks.

Despite this stream of praises, there was one thing that was off-putting about the show. Vocalist and guitarist, Colin Newman, came to the stage with an iPad in hand. It wasn’t a good thing, and it wasn’t a bad thing–it was just weird.

Get Tickets To See Wire