The holidays are almost here, and eventseeker’s “25 Days of Events” is drawing near. We know you have presents to package and ice rinks to dominate – so we’ve compiled a December event calendar that goes from Oakland to the Haight. If you like music, comedy, and being around jolly people, then we have the month-long tools to keep you cheerful.

6 // Not So Silent Night | Oracle Arena 5:30pm-1:30am
The Bay Area’s best holiday music fest opens up night one with Kings of Leon, Vampire Weekend, and more.

8 // December Block Party & Street Fair | Irving and 9th Ave, 11am-6pm
A cross between a block party, a festival and a street fair. Get to Irving and enjoy a medley of free activities.

9 // Basia Bulat | The Chapel, 9pm
This Canadian singer/songwriter brings a mellow and uplifting gig to the breathtaking music venue, The Chapel.

11 // Jagwar Ma | The Independent
The Australian Rock Trio of Sydney hits the iconic venue on Divisadero.

12 // Conspiracy of Venus | City Lights Books
An all women’s a cappella vocal ensemble brings a range of vibrant music to North Beach.

14 // The Elf Party 2013 | Grand Ballroom at The Regency , 8:30pm
Time to get dolled up in your best holiday costume. Proceeds go to charity, so get ready to get guilt-free egg nogged.

16 // Midlake | Bottom of the Hill 7:30pm
The Texan folk-adelica band, Midlake, makes a five-pence appearance at one of San Francisco’s most intimate venues.

21 // The Growlers | The Independent 8pm
Hailing from Dana Point, The Growlers are bringing with them an eclectic mix of country, surf, pop, and rock.

22 // Christmas With The Celts | Yoshi’s Jazz Club
Get your shamrock on with a night of Irish-American holiday-themed jigs. Excellent musicians and some Irish wit will carry  you effortlessly through a night at Yoshi’s. 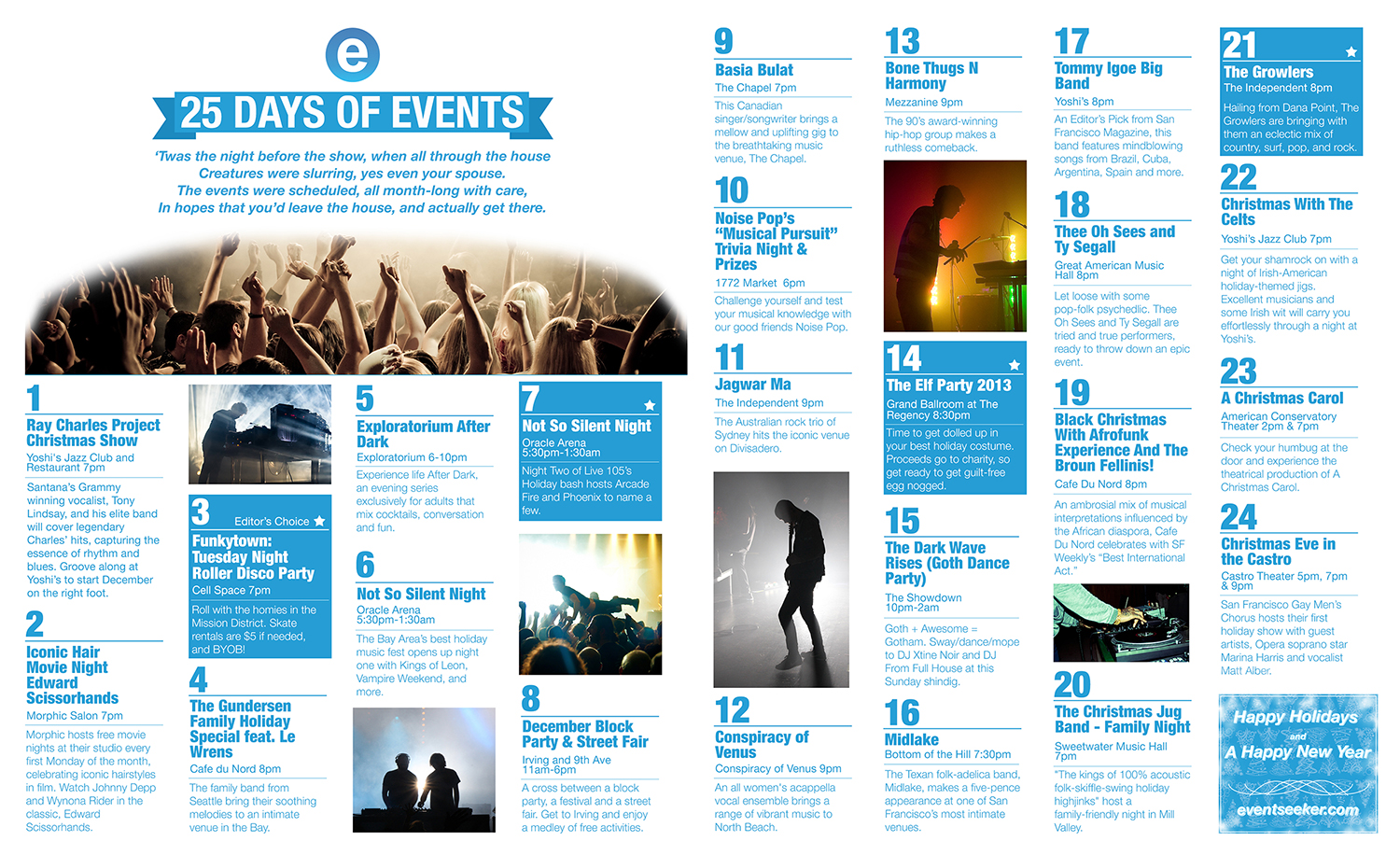