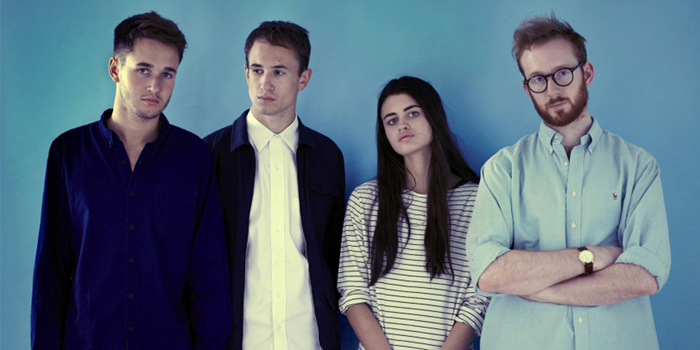 Judging by its name, when I first heard about Arthur Beatrice, I assumed it was a French band. Obviously, you can’t judge a book by its cover; Arthur Beatrice is a rock band from England! Formed in 2010 and known for spreading their music through word of mouth and social media, this band is a part of the new artists’ generation who uses the web to distribute their music and gain fans. Together, the four members–one girl and three guys–form a harmonious ensemble.

Last Thursday night performed an intimate show at The Chapel, located in San Francisco’s Mission district. When the lights of this charming venue dimmed, the drums started to beat, like a military percussion. Elliott Girardot is a creative drummer who plays with agility. In front of him, his sister Ella started to sing from behind her keyboard. Slim and pretty, with her long dark hair tied back, her presence invaded the stage with an intriguing sensuality. While slightly fondling her elegant neck, Ella danced, making her entire body move voluptuously. She dared to push her suave, velvety voice to a breaking point, as undulating blues notes seemed to come from nowhere to conduct the instruments, leading the melody. By her side, Orlando Leopard was guided by the rhythm, letting his body sway behind his guitar, while the bassist Hamish Barnes closed his eyes, instilling virile low-pitched notes to the broody music. Orlando gently began singing, his voice harmonizing perfectly with Girardot’s. In the background, the drummer and bassist’s voices occasionally added a fine melody to the tunes.

Arthur Beatrice’s music sometimes sounds as poppy as modern English rock bands, but also shows its own personality with riffs that sound a bit like songs from the 80s. The guitar definitely sounds like rock but the soft drums notes are often bluesy, almost jazzy . . . until the beat speeds up and excites the audience. The four musicians can’t really be classified into a specific genre, their style isn’t really defined, it is so unique!

This mélange of different genres appeared to be pleasantly received: little by little, faces in the audience lit up with happy smiles. Soon, pop music came to drive away the romantic, delicate vibe and people started to dance merrily! At the same time, touching piano notes emphasized the soft rhythm of the music. After this intense dancing, the band went back to a soothing melody. While some people slowly swayed their heads, lovers let their hands brush against each other, abstractedly gazing in the air. No loud guitar riffs, no loud drums beats, no shouts, in the end it’s all about mellowness with Arthur Beatrice.