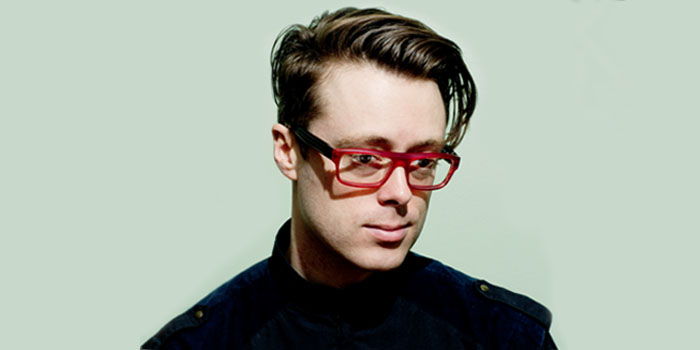 Behind the big, stern glasses, a candid smile shines on Jeremy Messersmith’s lively face. To describe Messersmith’s last album, Heart Murmurs, “delicate” seems to be the proper adjective. Released in February of 2014, the album led the talented artist to launch a world tour, which brought him to San Francisco on March 24th. After seeing him in concert, it appears his delicate sound perfectly matches his intimate, joyful presence.

From outside, Brick and Mortar Music Hall looks like a hangar, but after stepping inside and seeing how close the audience and the bar are from each other, you understand it is a modest place to foster communication between musicians and music fans. Even before the musicians arrived, the tiny stage was already packed. A big orange drum, two old basses, a large electronic keyboard and a colorful guitar occupied the space so that the band had to sneak among their instruments to begin the show. 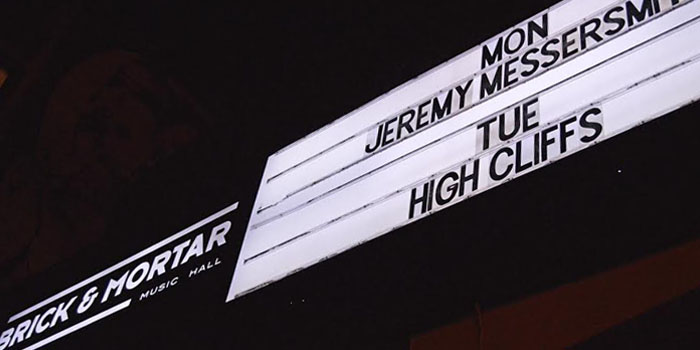 At center stage, surrounded by his mates, Jeremy Messersmith started the show with a couple of expected pop songs, illuminated by candy-pink spotlights. By his side, a pretty brunette—Sarah Perbix, danced from behind her keyboards, wriggling her hips to the music. Her keyboard riffs stressed the sounds of the various basses and strong drum sounds. Her graceful voice accompanied the end of Messersmith’s sentences, bringing a feminine aspect to this masculine atmosphere. After a while, the band left Messersmith alone on stage with his guitar. The music started to sound very sweet, like a ballad and a romantic atmosphere settled in the audience. The dancing halted as people simply rocked their heads to the soft music.

Messersmith often makes fun of the fact that there are already more than enough (if not too many) love songs, but he still enjoys making them! Indeed, his lyrics –mostly talking about love– give evidence of this artist’s romantic mind. But he chooses to treat it in an unusual way: with disillusion. He knows how to balance romance and irony, sweetness and bitterness. He finally makes us dream about love and laugh about unhappiness, such as both are part of everyone’s life.

Looking at Jeremy Messersmith’s music online, you might think he is all about pop music. However, his music style isn’t very precise. From the rock sounds during the first minutes of his Brick and Mortar show, he went on to play soft ballads and at times touched upon guitar-country sounds, all while keeping the audience dancing! In the end, his dance-pop style is most evident when he is harmonizing with his band, exchanging complicit glances that show the audience how much they enjoy what they do.