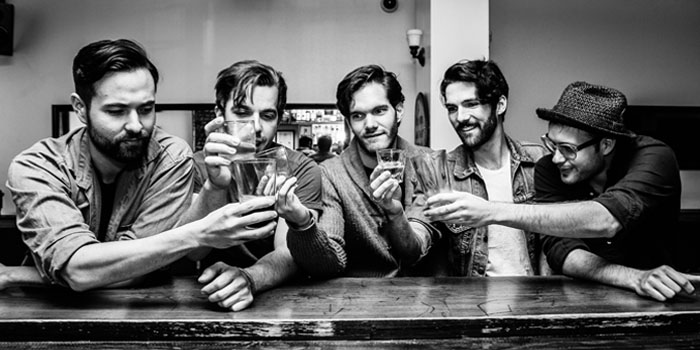 Rocket & The Ghost serves an interesting dose of rock n’ roll, to say the least. Their sound moves seamlessly between elements of 60s and 70s rock, with nods to modern folk and vintage country, all the while driven by a tight and polished contemporary sound. Powerful vocals and some brilliant harmonies seal the deal for a band that holds up just as radiantly in their live performances as they do in recordings.

Rocket & The Ghost is fresh on the scene and making waves, releasing their self-titled EP in November, 2013. Recently, the band was nominated for an Independent Music Award for their song “Gold”. Produced by Wilson Brown, the EP was recorded live at Excello Studios in Brooklyn and serves as an introduction to band’s range and talent. We had a chat with Kiyoshi Matsuyama before Rocket & The Ghost’s upcoming shows in New York and Boston this weekend.

Tell us the first word that pops into your head when you think about the music of Rocket & The Ghost.

Dreamy? Also the first word that pops into my head when I think of the members of the band.

You were previously in the well-received band, the London Souls but left to embark on your own project. Would you tell us a little about that transitional period and the subsequent birth of Rocket & The Ghost.

The following responses are the opposite of true: It wasn’t a hard transitional period, I knew exactly what I was doing right from the start, Feelings were not hurt in anyway, It was not the best decision I ever made. It’s still easy, but not worth it.

In trying to avoid sweeping generalizations of the genres associated to your music, let’s talk about some of your influences as an artist.

I love Lou Reed but I don’t know if I’m anything like him musically. We just try to strike a nerve as hard as we possibly can and then hope it resonates with people. As far who this band sounds like, that’s not really up to me or anyone else in the band at the end of the day. We’re just trying to figure out what it is we do better than anyone else.

What were you listening to while recording the last album?

Talking about inspirations for your creative process, is there an organic evolution to your songwriting? Is there a method to the madness?

If anything I think there should be more madness to our methods in the future. Inspiration is cool, but you just have to do it. Make Lemonade and whatnot. Sometimes it’s organic, but it’s rarely probiotic. You pray for a probiotic song, but sometimes you get a GMO. The process is one thing that is never the same, which is frustrating, but exciting. When we own the process then it’s time to stop.

Rocket & The Ghost has an incredibly complete sound. There is a fluidity to both the studio recordings as well as the live shows. As a band, do you have a preference for studio sessions compared to playing live?

Thanks. Our EP is a very live sounding record which was fun to create. The singles we just finished up are very different in how I’m used to working, which made it very exciting. I don’t want to be in a band that sounds the same in and out of the studio. I want to shoot fireworks out of my guitar.

What’s the most dreaded part of touring and the thing that keeps you going while on the road?

The answer to both is Cracker Barrel.

Where are are the local haunts for Rocket & The Ghost?

What is on the horizon for the band?

Get Tickets to See Rocket & The Ghost

Rocket & The Ghost The London Souls