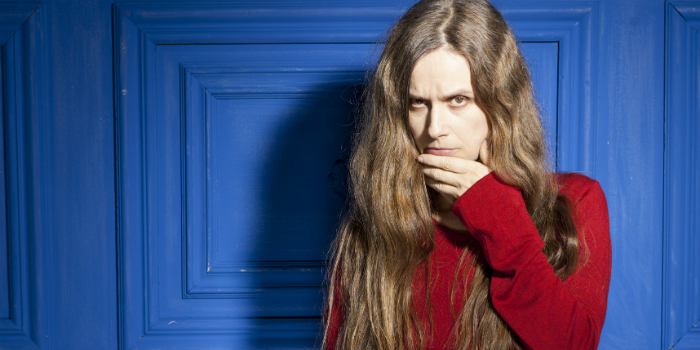 Argentinian musician Juana Molina seemed to be having a blast during her recent sold-out show on April 24 at The Independent in San Francisco. The singer/songwriter jubilantly bounced around onstage, effortlessly transitioned between playing guitar and keyboards, and was joined by two additional band members on drums, keyboard and guitar. Her highly-anticipated appearance was enjoyed by a slew of cheering fans, some of whom called out and proclaimed to have “waited forever” to see her live.

Molina’s music can convince you that while there may be room for everyone in this diverse musical world, as far as live music goes, there is nothing more cathartic than watching someone passionately singing from their soul while strumming their damn heart out. The only surprise was how little the audience was dancing; the upbeat music induced only a slight head nod among many, which can perhaps be attributed to the crowd’s complete awe of the artist’s natural grace and Rapunzel-like hair.

Molina carried a large repertoire of Spanish-English psychedelic fusion songs with her into her show, helping create a distinctive sound. Her new album, Wed 21, shows that music for her is all about discovering new worlds and immersing yourself in foreign cultures, both of which were evident in the live setting. The evening was a diverse cultural tapestry of looping percussion, keyboards, and French, Argentinian and Brazilian influences that combined to transform the dark concert hall into the colorful streets of the performer’s native South American home.

Get Tickets to See Juana Molina