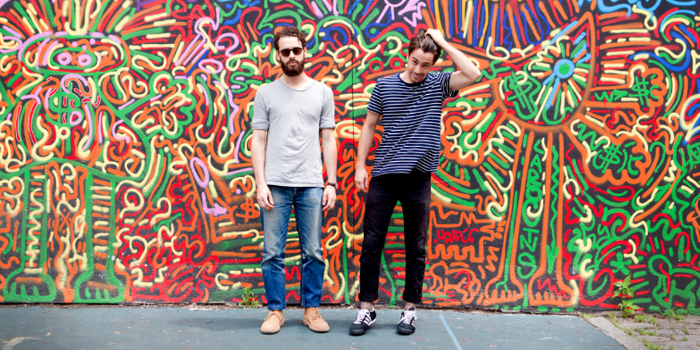 Coasting off the trails of its 2013 album, Tender Madness, Los Angeles-based indie rock duo PAPA is about to launch a cross-country tour that starts at the Independent in San Francisco and includes stops at Sasquatch and Governors Ball. Defining its musical ethos as a live act with a knack for blending inspiration from a diverse field of influences into a cohesive sonic amalgam, PAPA’s rousing shows highlight a band with natural performance aptitude and a respect for showmanship. On the eve of their upcoming North American tour, singer/songwriter and drummer Darren Weiss tells us about some of his favorite music venues to play, what it was like sharing a bill with Neil Young and his fond memories of trashing a drum kit as a 14-year-old.

How do you typically prep for a tour?
Well, there are certain things I like to include in my daily ritual that I don’t get to do because of space and scheduling while on the road. But I like to push myself pretty hard with my singing and drum work because when you’re in a van with four guys all day long, you don’t get to make all the noise you want. I also meditate quite a bit before going back on the road to get my head straight for some of those long drives and exhaustion.

Do you have a pre-show ritual?
I have a half-hour drum warm-up and a half-hour vocal warm-up, and if I have time I like to watch interviews or vintage performances from Patti Smith or Bruce Springsteen to get in the dirty, sweaty mindset. Before we hit the stage, we usually all do jumping jacks, slap each other in the face and fist bump.

What’s a typical day like on the road?
A typical day for us is a drive day. So we sit in the van, watch the scenery, listen to records, swap stories. If we have time in a city, we’ll usually go look up the cool local record shop and go for a run or a swim or something like that.

Any stylistic performance shifts between touring your EP, A Good Woman Is Hard to Find, and your recent LP, Tender Madness?
There is a different feel to the songs off our LP, Tender Madness. It’s less of a classic, defined style and more some weird creation of playing. So I’d have to go song by song, which wouldn’t be interesting to anybody, especially to myself. But there are more lyrics and more heat in the newer material.

Do you tend to have an arranged set list that you play every night or do you change it up every show?
We go back-and-forth with that, because sometimes we find something that really works and helps build momentum and sustain energy throughout the set. But the truth is, no matter how much it works, if it feels formulaic at any point, it immediately becomes depressing to me. For me to love it and live it, it has to be as interesting to me as it is to our audience. So we try to keep everything very exciting for ourselves on stage.

Is there a particular city with audiences that you look forward to playing for?
Yes, but the best times are the surprises when you aren’t looking forward to it.

Do you have venues in Los Angeles and New York that you look forward to playing in?
Our last headlining show in Los Angeles was at the El Rey Theatre, which we’ve been playing since our days in high school, failing in the Battle of the Bands. So it was a really beautiful night and I hold it pretty close in my mind. In New York, I feel like our most intense concerts have either happened at Music Hall of Williamsburg or Terminal 5, but it’s definitely a dream of mine to play the Beacon Theatre and Radio City.

Do you have a preference of playing music festivals or concert venues?
It depends on the festival or the venue. Festivals are really fun because it’s like a carnival and you get to interact with a really diverse audience. But sometimes it’s much more fulfilling to have your own night at a club and set the tone.

What is your first memory of playing a good live show?
When I was 14, my band played the middle school Latin convention and trashed the drum kit after a ripping set. Needless to say, we won all musical competitions that night.

Do you have a favorite musician or band that you’ve opened for or had open for you?
We played a festival a couple years ago along with Neil Young, so it was amazing to get to watch him on the same bill with us. Moses Sumney is a young heartbreaker coming up out of LA. He opened one of our shows and then came back on stage to sing backups with us. That was a lot of fun.

What was the first concert you went to?
The first show I went to without my parents was when I was 13 and I went to the Troubadour to see The Start, Bluebird, John Frusciante and De Facto. Looking back, that is a really strange bill, but I loved every second of it. I used to go to shows when I didn’t even know who was playing. When I was young, I just wanted to see live music and be around people who were setting the standards for an exciting underground culture.

What musicians or bands have influenced your performance style?
The Band, The Clash, Bruce Springsteen, Nick Cave and the Bad Seeds, Fugazi, Hot Snakes.

What’s the last good concert you’ve seen recently?
Cody Chesnutt ripped shit up at the Troubadour last month. People should not sleep on Cody Chesnutt; he’s got fire in his veins.

Get Tickets to see PAPA