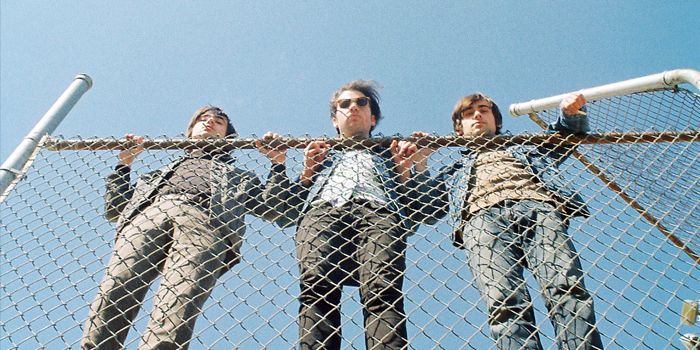 Louisville, Kentucky’s White Reaper has kicked off its young career in fine fashion thanks to a punchy brand of punk-infused garage pop. The three-piece, comprised of Tony Esposito (vocals/guitar) and twin brothers Nick (drums) and Sam (bass) Wilkerson, will release its eponymous debut EP on Polyvinyl Records in June before heading out on the road with fellow Louisville band, Young Widows. We caught up with Esposito to talk tour planning, what he’s looking forward to most and a bit about the film Spider-Man. Okay, a lot about the film Spider-Man…

Will this upcoming tour be the most ground you’ve covered and amount of shows you’ve played in a touring stint yet? What kinds of things will you be doing in preparation?

Yeah, this will be the most ground we’ve covered by far. In terms of preparation, we watch Spider-Man [Editor’s note: Further correspondence confirmed this to be the 2002 Sam Raimi film] 10 times before and after each practice, just to really reinforce the idea that “with great power comes great responsibility.”

What do you each do for day jobs?

We’ve each had our fair share of blue-collar jobs: kitchen positions, care giving, etc. Right now, the twins are working and Tony is not.

How’d you get linked up with Young Widows for this string of shows? What are you looking forward to about being on the road with them?

Evan from Young Widows asked us and it was a no-brainer. We’re looking forward to our first real tour and can’t wait to see Young Widows play every night.

What’s a standard day like for you guys while touring?

A lot of driving, maybe some kind of food, a lot of smash hits from the early-2000s, whether it’s System of a Down or just your standard Green Day. Then we take all of that energy and bring it to the stage.

Do you have any pre or post-show routines?

Pre-show, if there’s time, we always have Spider-Man, iPods, PSPs, VideoNow, what have you. Post-show, again, Spider-Man. Hopefully after the show we can bring it to a bigger screen and all watch together, so we can discuss what we’re seeing.

What kind of transportation will you guys be using on this tour?

2007 Chrysler Town & Country fitted with a TV and DVD player for Spider-Man.

What kinds of things do you listen to on the road?

Well, if we’re watching Spider-Man, the music’s off. The way the van is wired, there can only be one source for audio and it’s pretty much always Spider-Man.

Denver…we’re trying to get our hands on some edibles. We’re also looking forward to Los Angeles, of course.

What can people expect from a White Reaper show?

Are there any musicians or bands that have influenced your performance style?

Actually, in terms of performance, Willem Dafoe has been a wealth of information for us. He’s just so damn confident and he believes in us. He’s a true inspiration.

Any memorable tales from previous tours you want to share?

One time we stayed the night at Daisy from Foxy Shazam’s house and we were home alone when his dog ran away. We had to chase him for a couple of blocks until our friend Shane finally got him. That was a close one.

Get Tickets to See White Reaper