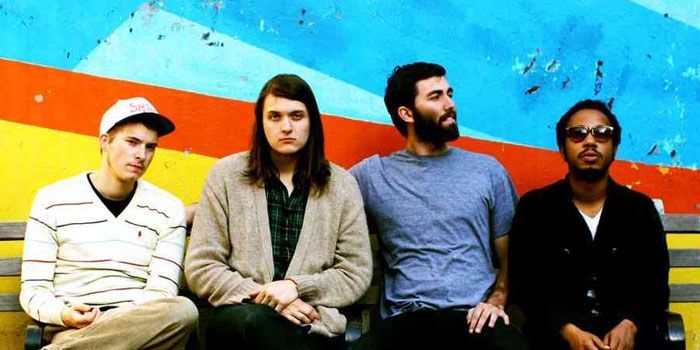 Miniature Tigers has been a band in transition over recent years. Since breaking out in 2010 with its sophomore LP, Fortress, the four-piece has since adopted a glossier, more danceable synth-based style. The group’s new album, Cruel Runnings, comfortably settles even further into this new direction, channeling the feel good nature of summer in the process. Frontman Charlie Brand took some time to chat with us about recording in the Caribbean, his love of summer albums, and more.

It’s fitting that Cruel Runnings is dropping in the summer, as it evokes the feeling of the season really well. Did you set out to capture a particular vibe when you started writing the songs for this record?

I think a lot of the songs have a bright sound to them. I wanted to make a record that took me back to summers of listening to Weezer and Nirvana as a kid, and how exciting that was. I think this is our version of capturing that.

You opted to record in Jamaica this time around. How long were you all there and what was that experience like in comparison to recording the last few albums?

Our last records were all recorded very quickly and in not the most inspiring of circumstances. We really wanted to stretch our legs a bit and be in a blissful headspace in order to translate that into the music. We spent two weeks recording in Jamaica. We woke up every day, took a swim in the ocean, and would record into the night. We came back to New York afterwards and finished it up in another couple weeks.

The transition from the relatively darker-themed and psychedelic material of Fortress to the more slick and danceable style of the last two albums has been fun to hear. What are some classic pop influences you all share that have helped shape the newer sound?

I love taking sharp turns musically, and playing with new sounds and genres. I’d say we either have fans that are along for the ride or fans that get attached to a certain record and then get upset when we switch it up. I’m thrilled to have such thoughtful and passionate people into our music either way. As far as influences go, anything from the past was there in more of an abstract way. We wanted to capture the way those records made us feel when we were teenagers. Sonically, we were more influenced by Top 40 hip-hop.

I’d like to ask you a bit about the upcoming tour. How do you usually prepare for a tour?

It will usually start with making a list of songs we want to draw from. Depending on how many new songs we need to learn, we’ll usually practice a few hours a day for a few days just to work out the kinks. I’ve learned that no amount of practice compares to figuring shit out in front of an audience. I think the moment when we are on tour and feel like we’ve locked in a hundred percent is when I get bored and want to mix it up again. I love watching a band make mistakes. Perfection is boring!

What is a typical day like when you guys are on the road?

It’s not as glamorous as people may think. It’s a lot of driving and sitting around in the van for hours. The best part is the one hour a night we get to play and hanging out with fans afterwards. It makes all the bullshit of the day feel worth it.

Are there any logistical onstage changes for touring this new album compared to previous tours?

Nothing too major. The difference will be our set list, which we are putting a lot of thought and energy into.

Which track from Cruel Runnings do you enjoy playing live the most?

They are all fun to play because they are so new. “Used To Be The Shit” is my favorite to play right now. We haven’t learned it yet, but I’m excited to play “I Can’t Stop.”

What show(s) are you looking forward to most on this tour and why?

I’m excited to play Phoenix. It’s our hometown and last time we played I had the worst food poisoning of my life. It was a sold-out show with all our friends and family there, and we only played a few songs because I was too ill. I’m determined to make it right.

Do you have any pre or post-show rituals?

We will usually have a couple drinks right before we go on and I like to smoke a joint at the end of the night to relax after all’s said and done. Other than that we don’t get too ritualistic.

What was the last great show you’ve attended yourself?

I saw Haim at Stubbs and they blew me away.

Get Tickets to See Miniature Tigers