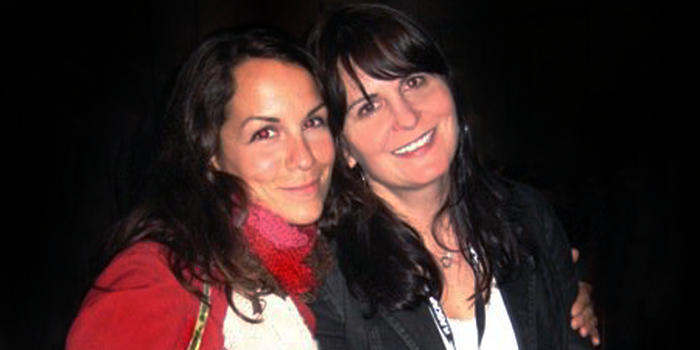 “It’s a wonderful company to be part of because so much of our own personal creativity and excitement comes into every single thing that we do.” – KelleyAnn

At the Treasure Island or Noise Pop festivals, these two powerhouse females might go completely unnoticed. However, here at Hotel Biron, they seem to be known quite well.

Julie and KelleyAnn were greeted with hugs and kisses as they walked into Hotel Biron, a small bar tucked away in Hayes Valley that is known for its exceptional wine list and loyal support of local artists. In the past, the bar’s staff has worked with Noise Pop to put on art shows, and according to Chris Fuqua, the owner of Hotel Biron, they will happily continue this relationship.

The two have spent countless evenings here after the Noise Pop office has closed, enjoying a wine bottle while utilizing the bar’s Wi-Fi to power through vendor approvals, permits, and artist relations. On this particular evening, I joined them for their bottle of wine, along with a chat about what goes on behind the scenes at Noise Pop Industries.

Let’s start with a little background on your roles within Noise Pop.

Julie: I pretty much weaseled my way in and now I’m still here eight years later. I started as a production coordinator and now I’m Director of Operations. We’re a small company, so our jobs are really all-encompassing. I make sure the ship runs. Our staff is about 8-10 people.

You guys get a lot done for such a small group of people.

KelleyAnn: I’ve been with the company for about five years. I’m the Production Manager now but I started as, I want to say, an intern. But I was kind of more of someone who kept showing up and wouldn’t disappear. I kept showing up and owning something, until I owned enough that the company realized they really wanted me to stay on staff.

What separates Noise Pop from other event production companies?

Julie: Everything is very meticulously curated. A lot of festivals will go to another festival and see what they’re doing and base off of that, but we definitely focus a lot on local, especially for Noise Pop Festival.

KelleyAnn: I would say we also have a very high standard. So even for something like a block party, which has been done in so many different neighborhoods—and done well, don’t get me wrong—Noise Pop steps it up that extra level and everything looks and feels perfect, from the moment that an attendee comes to the moment that they leave. It’s all about the experience and we really focus on making that the best possible experience.

Julie: You’ll never see kettle corn at any of our festivals.

KelleyAnn: My whole thing with our block party is that you’ll never see a bouncy house. Not that there’s anything wrong with that, but I would rather have an interactive art workshop tent, sponsored by a nonprofit, that really draws people in for another reason, and gives an activity that maybe they can take home with them and inspires them in a bigger way. I feel like that experiential part of our company is really what separates us from other festivals or other companies that do similar productions. 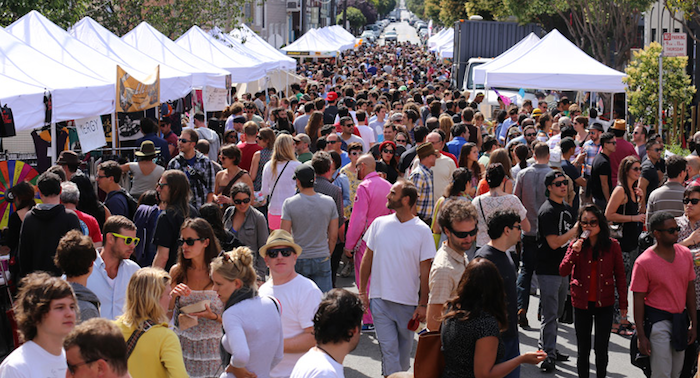 What goes into picking out the vendors?

KelleyAnn: We go to a lot of things. We go to the Maker Faire, we go to art marts, we take recommendations from renegade craft fairs, and we find the fit that’s right. Then we heavily curate. So for instance, no two jewelry vendors will be next to each other. Maybe we will only have three for all of the block party and we really have to figure out where they fit and what that will look like. Again, it’s really the experience. If someone is really going to want to shop, they’re going to want to shop for different things.

Since Treasure Island has become such a large national festival, have you started to bring in more national vendors or are you sticking to local?

Julie: Ideally, if we can, we’d rather have local. If something is really cool and it’s national, we’d definitely have it. But if there are two things that are the same, I’m going to take the local vendor.

KelleyAnn: A lot of our local vendors appeal to our demographic. San Franpsycho, they do so well there and they’re such a fun part of the festival. It’s a really good mix, but I’d say it’s mostly local and very DIY.

What are some of your biggest struggles putting the festivals together?

KelleyAnn: Noise Pop Festival is a very hard one. Sixty-five events in different locations over one week is just an incredible feat.

Julie: There are 24 venues, 120 bands, their managers, agents, the venues, and the production people. Then you multiply that and they all have your cell phone number.

KelleyAnn: It’s just logistically a clusterfuck, in the best way that that can be possible. It’s a wonderful festival, it’s our namesake festival, it’s what we’re founded on, but it is definitely the hardest project I’ve ever worked on in my life.

How do you manage the aesthetic of who you are within San Francisco and how will this change when you expand to other cities?

Julie: I think San Francisco is so unique that if we brought a lot of San Francisco to other places, they would appreciate it. If we bring the block parties elsewhere, we’ll partner with someone in that area. 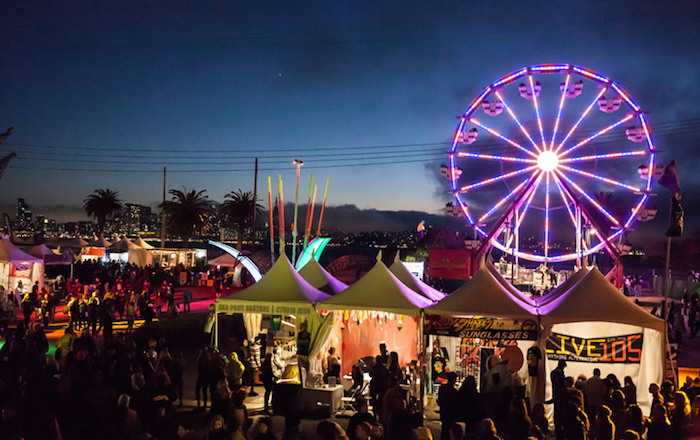 What are some unforeseen challenges?

KelleyAnn: I mean, that is what production is. You can plan and you can be ready and do as many walkthroughs and as many site plans as possible. But the unforeseen problems are kind of what make a producer separate from an attendee.

Julie: In the first year of festivals there’s a lot that goes wrong, and that’s definitely unforeseen. I think we’re pretty good at this now, so it doesn’t seem as daunting. I don’t sleep for two weeks before a festival. Everything is running through my head. Every year I’ll have a dream about Treasure Island, that I forgot to book the vendors and that’s my main job. My motto has always been, everything can be fixed. I think people try to throw people under buses and there’s never a reason for it.

KelleyAnn: Yeah, you fix it as a team, the same way you got into it. The biggest fear is that someone will get hurt, and if no one got hurt then the problem isn’t that serious.

Julie: I go with “nobody died.”

Do you guys ever have time to sit back and enjoy the festival while it’s playing out?

Julie: It depends on the festival. Treasure Island I actually enjoy. We deal with vendors, so once they’re set up you can take a step back.

KelleyAnn: We’ve talked a lot about even going to festivals as attendees. It’s really hard to be there and have fun without having this working, production mentality. There is an amount of excitement, almost addictive excitement that is part of these things. And the gratification of standing onstage on the Saturday of Treasure Island and looking out onto this audience of smiling, happy people, and just knowing that so much of your own effort went into their happiness and this experience, it’s very moving, very gratifying. That’s what really does it for me.

Julie: Festivals are supposed to be fun! So if you’re not having fun, you shouldn’t even be working it.

If you could change one thing about the festival industry these days what would it be?

Julie: That we would be the only festival. All the festivals would be ours.

KelleyAnn: That’s a really hard question. I feel like festivals are all really unique and they do their own thing, so it’s hard to say what should change.

Julie: I don’t think you can lump the festival industry into one industry at all.

KelleyAnn: I think I’d love to change the misconception about people like us. A, that we’re famous. And B, that we’re rich. Both of those things are very untrue. It’s definitely a labor of love and it’s definitely a job. I’ve met a lot of famous people but that’s not why I do this.

If you could throw your own festival, who would headline?

Julie: Bjork, I gotta go with Radiohead, and Fleetwood Mac! We have a slight obsession with Stevie Nicks.

KelleyAnn: The first three bands that popped in my head wouldn’t fit in a festival together, which is interesting, but I would probably go Interpol, Ratatat and Modest Mouse.

Julie: You know who I’d really like? My headliner would be Michael Jackson. Bringing back the dead.

KelleyAnn: Maybe Young & Sick. They’re probably my favorite new up-and-coming band. They were part of our showcase at SXSW and they blew us away and happened to be the sweetest gentlemen. It was awesome. Wild Belle, Portugal. the Man, and The National would be up there too.

Julie: The National! This is not a game I want to start.

What are some things you are excited about for Treasure Island coming up this fall?

KelleyAnn: I’m excited for some of the art ideas that are coming together. And then there’s the lineup. There’s music there too. That’s always our joke, “Oh, there’s music at this festival?”

Julie: “They have bands here?”