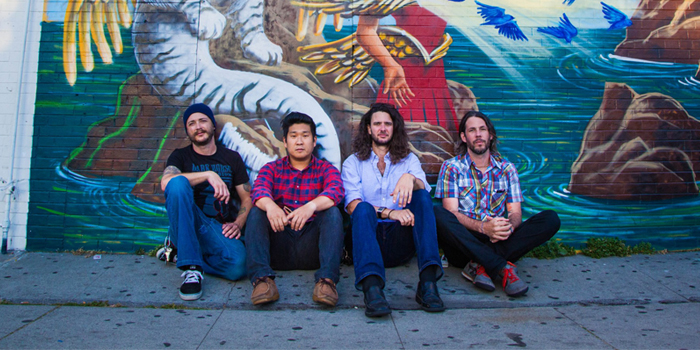 Rx Bandits is a band that is no stranger to transformation and renewal. Once given the lazy label of a ska-punk hybrid, Rx Bandits quickly tore through the roof and exceeded expectation – continually breaking new ground with each album. The Long Beach group’s latest effort, Gemini, Her Majesty, represents a return to form after a brief break from writing and touring. It turns out that a good rest is just what the band needed in order to come back to writing with tenfold the energy. Rx Bandits is known for performing on studio tracks, giving the band’s recordings a kinetic element. It comes as no surprise that this translates so well to the stage.

San Francisco’s famed Fillmore auditorium proved to be the perfect host for the band’s performance on August 7. The anticipation was palpable for audience and band alike. New and old fans bonded with each other, mentioning when they first began listening to the Rx Bandits and the memories they have with the band’s music. Earlier in the day, guitarist Steve Choi mentioned via Instagram that playing The Fillmore was a childhood dream.

When Rx Bandits finally came onstage to the intro track of Gemini, the band quickly jumped into “Stargazer,” the most recent well-received single. Fans sang each word enthusiastically, but the floor really got moving when the band followed up with fan favorite “In Her Drawer.”It took less than a few seconds of the intro drum beat to get people jumping. This is how much of the night played out–a mix of the band’s biggest hits interspersed with new material.

“My Lonesome Only Friend” was the only track from Mandala to be performed at this show. The set list consisted heavily of songs from Gemini, …And The Battle Begun, and The Resignation. Some extra treats were thrown in as well. Singer Matt Embree made a special note before playing “Future, Buddy,” saying that it was the first time it would be played live at a show. Before launching into “Apparition,” Embree crooned a gentle portion of Bill Withers’ “Ain’t No Sunshine.” “Only For the Night” contained a customary mid-way jam. When the members of Rx Bandits left the stage, they returned for an encore to the audience singing the chorus to “Overcome (The Recapulation).” The band rounded out the night with “Ruby Cumulous,” “Decrescendo,” and “Crushing Destroyer.”

The stage housed a giant “R” and “X” that lit up in multiple patterns depending on the sound of each song. Each band member played at 100%, improving upon the studio versions of songs. Drummer C-Gak broke through a snare drum on the first encore song (not an easy thing to do). Guitars and bass interplayed jubilantly with dynamic precision. Embree’s vocals were a tablespoon of honey spun into a cup of chamomile tea. The audience was taken from deep-space purple nebulas to the southern California coast on a warm night.

What makes an Rx Bandits show so fun is that it is more akin to a dance party than a rock show. Every member of the audience danced away the tensions of day-to-day drab, not missing a single lyric. Folks left the Fillmore visibly less clouded than when they entered, reassuring that an Rx Bandits show is the place to be for musical healing and celebration.

Gemini, Her Majesty is available now.

Get Tickets to See Rx Bandits