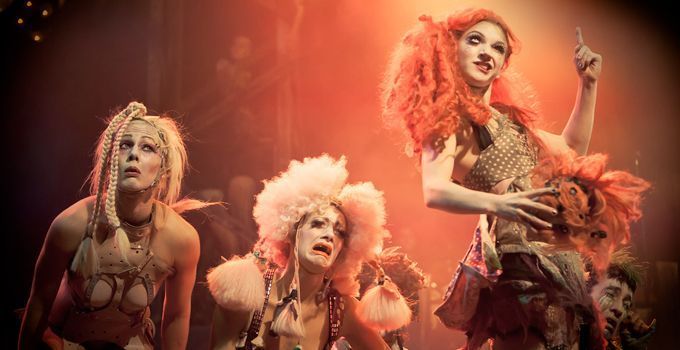 On stage, Lucent Dossier Experience captivates and inspires audiences with fantastical performances that combine circus elements, dance, music, and fire, all wrapped up in haute couture costumes. The multitalented Shawn Barry, who sings, dances, spins fire, and drums for the group, sat down to chat with us during sound check at Shambhala Music Festival. While the sound crew was fine-tuning the bass, he told us about Lucent Dossier’s current show and the group’s overall vision.

How did you get involved with Lucent Dossier?

About 10 years ago, there was a movement in Los Angeles. It was a conscious movement, but it was also attached to a real, fresh, artistic kind of thing. So when I moved there, I instantly tapped into that. Lucent was really at the forefront and was embraced like a family environment, so it was like finding a community and a creative outlet at the same time.

Have most people who perform in Lucent Dossier been involved with the group for a while? You said this was 10 years ago?

Yeah, there’s a core group of people that have been there for 12 years, and there are performers who come in and out. But it’s really a labor of love, so you start to see people drop off. And it’s the people that stay with the heart connection that are the ones that you’ll see for years and years. That’s actually where the magic is, because a lot of the Lucent performance is about holding intention in the performance for each individual dancer. The deeper that intention, the more we’re connected and the more magic happens. So it’s predominantly people that have been there for years and some new people that show up, and when the right pieces come, they fit in great.

Can you talk about your current show? Is there a story? What can we expect to see tonight (at Shambhala)?

The current show is called “Light Up the World,” and again, it’s really about empowering the hero, the light within each of us. My feeling is that it’s no longer about one hero saving the day. It’s the superhero in all of us that needs to come out. This particular show is geared toward the divine feminine, empowering the woman and liberating the woman’s spirit so she can be herself without all the barriers and blocks and things like that. We tend to lean a little bit toward that in this show, and as a man, I play just as important of a role in the divine feminine and honoring and celebrating it. I think there is that theme and it’s nice doing it here at the Village Stage because this is a stage about becoming a warrior, and transformation into the light, and all those things. To be able to let the divine feminine shine in that context is really exciting because there’s a warrior in all of us. So that’s my intention for the show. That’s sort of the loose interpretation of everyone, but we all have different inspirations.

When you’re putting together the show, is there a particular element around which everything is built, such as the music or what the performers want to do?

Yeah, I think the whole thing’s built around the vision of Dream Rockwell, who’s sort of the director/creator of it. She has a vision and that’s the core of it. Sometimes, we don’t all actually see the vision at first, and then the intention sort of brings it all together. But she has a story; she’s got something in her mind. It’s really cool because the show has a lot of cirque elements, so people get their minds blown, and if you’ve seen that before then you get past the costuming and the performance and you start to see the intention. You start to say, “they have an intention for this story, what is the story?” There are so many different layers to the show.

You guys are known for having amazing, fantastical, beautiful costumes to the point where you were photographed by Vogue Italia. Can you talk about the aesthetic that you’re going for with the costumes and the process of putting them together?

Jen Shields is one of the dancers and she’s also a creative in the costume department. For me, I just put on whatever the team picks out. I go with the vision. But it’s always about being free and highlighting these magical elements of yourself within a costume.

You also use bones and animal furs that have been found and reclaimed for reuse. What’s the intention behind that?

That’s funny because at home we have an owl in the freezer right now.

And here you are at Shambhala! (The Shambhala logo is an owl)

The intention is to honor the body and spirit of the animal. Most of us are vegetarian. There’s a tribal element to it, so if you have a spirit animal or you have the essence of another soul in your costume somewhere, it becomes part of your own identity, like a spirit animal. So it’s all done with honor, it’s all done with love, and total respect. I don’t wear a lot of the bones because I don’t know if I’m gonna stab myself or what, so it’s more for the ornate headdresses and stuff like this.

How do you hope to affect people with your art?

I just want to inspire people to love themselves, believe in themselves, rediscover that dream within themselves that is their life to create. This whole thing is about realizing our potential and surrendering all this stress and fear that we have. Anytime I perform, I want people to smile and to feel positive, and I want them to see themselves doing the same thing that I’m doing and pass a little of that energy on to someone else. It’s really just about transmuting different energies–-always positive. I just want people to be free; I don’t want anyone to be blocked anymore. When we’re free, we’re high, we’re super powerful, and we understand, we have compassion, we have self-love. I want everyone to have that feeling, just a little bit, just for a moment. Because as soon as you get it, you can’t let it go. Once you know, you can’t un-know.