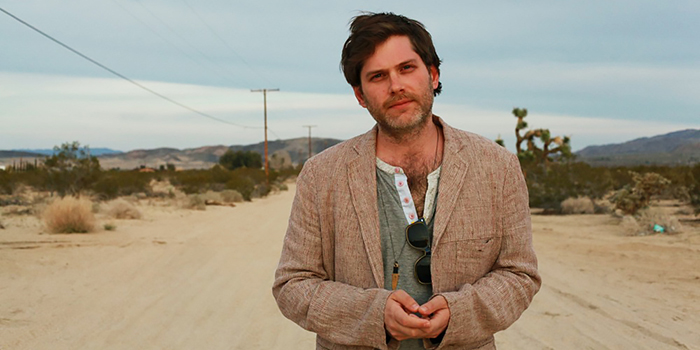 After over ten years acting as frontman and chief songwriter for Fruit Bats, the now sadly defunct indie folk outfit, Eric D. Johnson is branching off on his own. Recent years have brought on a lot of new experiences for the Portland-based musician, including playing bass for The Shins and composing original scores for films such as Our Idiot Brother. Now under his EDJ moniker, he’s back to making the charmingly warm music his previous band was known for. Johnson took some time to talk to us about his first solo shows, his expanding musical repertoire, and more

How are you doing?

I’m good, just recovering from Pickathon. It was Thursday through Sunday and I was there all four days. It’s one of my favorite festivals ever. From the artists’ side of things, it’s just awesome, and the lineup was crazy good. I played two of the days and then just hung out. I definitely worked hard and played hard, lets just put it that way (laughing).

The shows went really well. The Friday show was literally my first real show as EDJ. I mean, I’ve done little solo shows here and there, but this was the first full set that I’ve done. I’m playing completely solo, with looping pedals and samplers, so this was my first time doing that. So Friday was good but a little wonky, and then yesterday’s show was awesome.

We’re speaking on the eve of your album’s release. How are you feeling about it? Excited? Nervous?

Yeah, a bit of both. I’ve put a lot of records out over the years and this one’s a little different because it’s the first one of this new thing. So yeah, I’m excited, nervous, and also my usual M.O., which is cautiously optimistic.

You mentioned touring this album solo with samplers and loop pedals. Did you create this album entirely on your own as well, or did you collaborate with other musicians?

It’s actually a full-band record and I think eventually I will tour with a band. A lot of people are using the loop pedal technology to just get out there and get off the ground. But yeah, this was a full-band record. I played most of the instruments on a lot of the Fruit Bats records, and I played a lot of instruments on this one, but I had a core band of three New York guys who played on it, in addition to a lot of guest stars. So it is a solo record, but also maybe one of the more collaborative things I’ve done as far as what I refer to as the “trust fall” of putting my trust into a bunch of other people.

In interviews from throughout the Fruit Bats’ career you’ve talked a lot about reinvention, both musically and lyrically, from album to album. Did you experience something similar in your approach to this one?

In Fruit Bats stuff, there was always a mild concept on each record, a lot of it was imagery, and it generally had a third-person feel to it. I feel this is definitely my first truly first-person record. Even the stuff where I’m singing about someone or something else, it’s personal and really coming from me. So that’s where the lyrical shift is on this one. It really is consciously a solo record in that way.

You’ve referenced how your time playing with The Shins made you up your game, so to speak, as a professional musician. Can you talk about how that experience changed your perspective?

Playing with The Shins was like the graduate course in terms of making a living playing music. At least for me, I can learn a lot more by observing how other bands work than I can within my own projects. It made me realize, “Wow, I really do this now.” The Shins afforded me my first time not having a day job. Even though I don’t play with them anymore, I’ve been able to make it work without a day job ever since then. I do a lot of different things, but they’re all music-related. It made me realize that this is what I do and that you’ve gotta go all-in if you’re going to do it.

Are you going to be traveling with anyone on the road?

Nope. I’m literally going to be in the car by myself for a month. I’ve been talking to some of my friends who tour all the time and people have been giving me different perspectives on it. Little things when you’re touring with a band, like, “Where are we eating breakfast this morning” will be a lot easier. There’s a freeness and easiness to it, which is nice. The cool thing about this tour is that half of the tour, I’m opening for Delta Spirit, so I’ll have friends to hang out with every night.

You’ve done a lot of score and soundtrack work over recent years. How does that process contrast with other aspects of your music career?

It’s fun. It’s not necessarily for everybody, just because it’s highly collaborative and frequently frustrating. But it’s a really good exercise for your brain. And then when you go to make a record after that, it feels so remarkably easy in comparison (laughing). It’s like having swung a loaded bat beforehand.

Are you working on any film projects right now?

I’m not actively working on anything at the moment, but I just finished one a few months ago called Life Partners, which will be out later this year.

Get Tickets to See EDJ