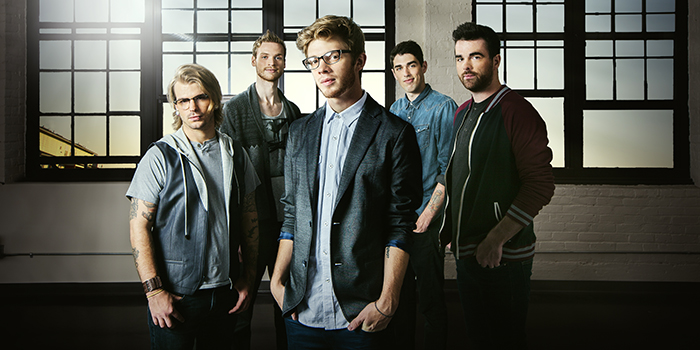 Paradise Fears played at Bottom of the Hill on September 11, marking the group’s second time performing in San Francisco, after a performance at The Chapel a couple of years ago. San Francisco was stop number 21 on the “Live Forever” tour, which started in Chicago at the beginning of August.

At Bottom of the Hill, the band’s songs were performed two different ways: some of the songs sounded exactly the way they sound on the albums, while others were changed and customized in ways that can only be done live on stage. The performance was high on energy level and crowd participation. Lead singer Sam Miller reflected on the first time he realized that people in the audience knew the lyrics by heart. It was at the beginning of the group’s tour in Chicago, during the speech of the song “Sanctuary.” As he started, the audience spoke the words with him and then took over. It was a milestone for the band and one of the moments where Miller thought, “Oh my god, what a life I have!”

The band members (Sam Miller, Cole Andre, Michael Walker, Jordan Merrigan and Marcus Sand) went to school together in South Dakota. At some point they thought, “We are listening to the same music, let’s jam together.“ After a school talent show, Paradise Fears the Turtle was born. Needless to say, they cut the “the Turtle” part later on and became simply Paradise Fears. Nevertheless, the fanbase still affectionately refers to itself as “The Turtles”.
Since those early days, the group has become more like a bunch of brothers than friends, which is not just true for the individual members of the band, but also extends to the managers and the tour crew.

A new album is expected to be released after the band wraps up its current tour. Some songs are already written, but so far the direction is not clear yet. Whatever the next tour will be called, it’s probably going to have a deeper meaning, just like “Live Forever,” a name that holds the concept of eternity.

Part of the entourage for this tour is the charming William Beckett, who opens for Paradise Fears with just a guitar and a laptop. The other special guest on the current tour is Hollywood Ending, who is able to boost the energy of the whole room.

Paradise Fears finds inspiration through various different mediums, not only other music; books and poetry certainly drive Miller to do some offstage writing. One of the most surprising musical influences is Drake. Even though Miller couldn’t care less about, for example, money – often a topic in Drake’s songs – he admires the ability of the artist to accept himself in the present that he is in. Drake’s influence is especially noticeable in some of the newer songs.

Artists that Paradise Fears met over years include All Time Low and The Cab. A personal highlight was meeting Parachute, with whom the group toured in 2013. Parachute’s second album, The Way It Was, is one of Miller’s all-time favorites and he says that seeing it performed live was simply incredible.

Aside from all of the original songs, Paradise Fears has recorded some covers as well. One of them, “Payphone,” by Maroon 5 and Wiz Khalifa, was watched on YouTube over 2.9 million times. However, Miller’s favorite cover is a mashup of “Royals” and “Team” from Lorde. Miller explains, “To make a cover means taking another artist’s song and transforming it into your own by paying respect to the original owner.”

From the original songs, Miller’s favorite is a new one called “Reunion,” largely because of the way it happened. He wrote the song over one night after he noticed a group of people in a bar standing close together. When he went home that night, the song practically wrote itself and hasn’t changed much since. “Reunion,” like a lot of the songs from Paradise Fears, is about fighting and struggling.

Even though life is never just black and white, and always a variety of grey (not to mention “color”), Miller feels more creative on a down. “If you are on a high point in your life you don’t feel like sitting down and writing about it – you rather just want to live it,” he explains. “While when you are on a low point, you can use the art to pick yourself up again.” The fans, in return, express their understanding with letters and poetry, which are always loved by the band.

The song “What Are You Waiting For” has a special meaning for Miller. It’s something his mom used to say to him and it’s tattooed on his left arm. One line in the song is “When I finally look back, I’ll think, oh my god, what a life I’ve had.” It’s his life motto to make him keep going.

From winning Battle of the Bands, to hearing the crowds sing their lyrics, to specific bonding moments off-stage, the guys from Paradise Fears are aware of the amazing things that have happened to them and hope that these will continue to happen to them for the rest of their lives.

Get Tickets to See Paradise Fears

Bottom of the Hill paradise fears