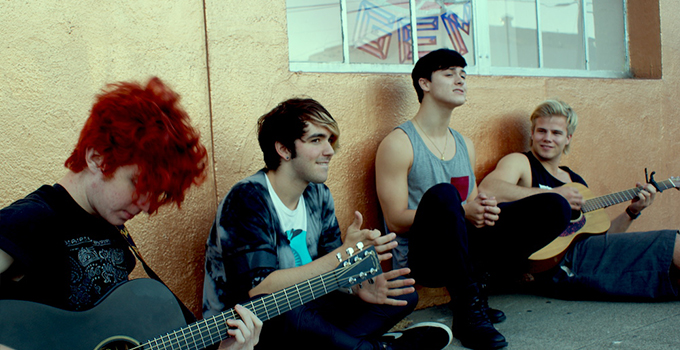 It’s been a crazy year for the guys of Hollywood Ending. They started off 2014 with their first ever headlining tour, the “Freaks & Geeks Tour,” and continued on with a tour of the UK and two shows at London’s Hyde Park Festival. After returning to the US, they pumped out four more tours and just kicked off the “Punk Ass Kids Tour” in the UK last week.

After rising to recognition and Disney Channel stardom on the fourth season of Next Best Thing, Radio Disney’s talent competition, the band began writing its own pop rock music and made its first waves in the real world. Hollywood Ending’s first EP, Always 18, brought it all the way to Japan, where the group has now secured a massive following through various festival appearances and headlining shows. While Hollywood Ending has embraced its new mainstream attentions, according to vocalist and guitarist Cameron Byrd, the band actually prefers smaller venues. “It’s more intimate,” he explains. “You get a better connection to the fans because everything is closer.”

The most distinctive thing about Hollywood Ending is probably its connection with its fans. The members of the group hold meet-and-greets before or after almost all of their shows, allowing fans to hang out, take pictures, and get to know them offstage.

Set to release its latest EP, Punk Ass Kids, at the end of November, Hollywood Ending has also begun to drop hints of its first full-length album.