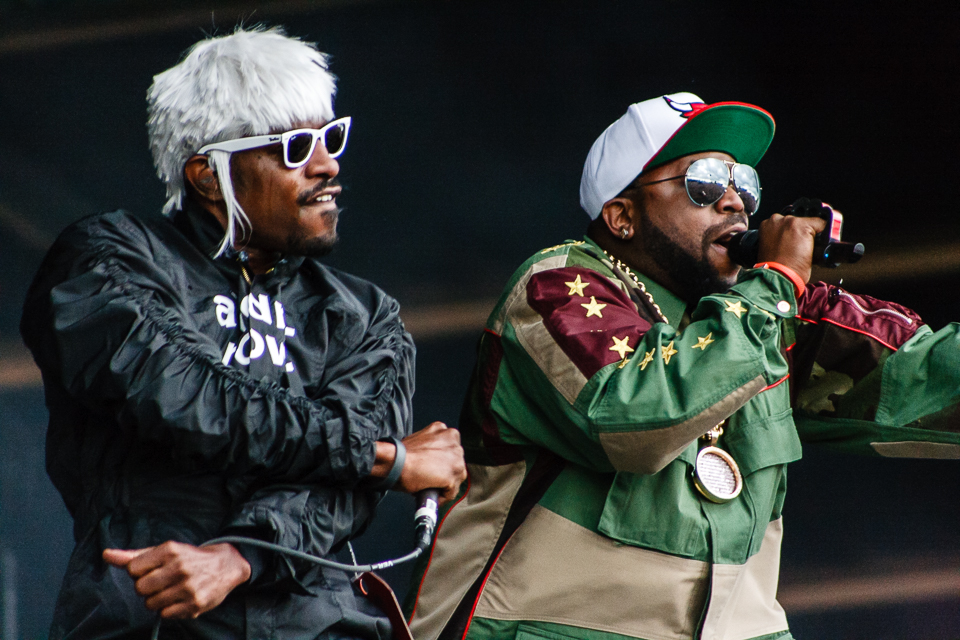 There were so many festivals in 2014 that at times it was hard to keep up with all of them. It seemed like a week never went by without a festival happening. This is why we decided to take the thousands of moments from the hundreds of music festivals that happened in North America in 2014 and narrow them down to the five best festival moments of the year. Read about these moments and watch videos of all of them below.

Outkast is one of the most important groups of the last 20 years. Combining funk, hip-hop, and Big Boi and André 3000’s Southern roots, the duo helped define hip-hop in the South for an entire generation to the point where today, the cultural center of hip-hop has drifted from its birthplace of New York City toward the ATL. Although the group’s first performance together in over a decade wasn’t its most memorable, it was the precedent of such a huge group–a group that meant so many things to so many different people–finally coming together after years of not necessarily getting along that made this such a memorable festival moment in 2014.

Coachella promoter Goldenvoice’s other big SoCal festival, FYF Fest, had some growing pains this year after moving to a new venue in Los Angeles. Issues with food, water shortages, and capacity at the LA Sports Arena on day one of the festival prevented festivalgoers from having an ideal experience. None of that prevented Goldenvoice from booking one of the noughties’ most angsty post-hardcore bands. Seattle’s The Blood Brothers reunited and played its first show together in seven years. From what we’ve heard, it was the performance of FYF 2014.

3. Chance the Rapper’s set at Lollapalooza

Even though he brought out Justin Bieber at Coachella, it was Chance’s Lollapalooza 2014 performance that solidified him as a Chi-Town legend. Chance had a tremendous 2014; even without releasing a new album or mixtape this year, the hype surrounding the rapper is palpable and his fanbase has more than doubled in the last year, especially in his hometown. So, even though he had played Lollapalooza a year prior on a smaller sidestage, his 2014 Lollapalooza set was a true homecoming/coming out party for him. Before his set he tweeted, “Tonight isn’t performing for performance’s sake. It’s a Chicago thing. I love music and touring. But tonight it’s for Chicago,” setting the tone for what would be one of the most memorable performances of the North American festival season. Chance not only brought out Chicago legend R. Kelly during his performance, but he played an emotional set, telling the crowd of over 60,000 in attendance, “Y’all are my family, but to my actual family who’s here…thank you. This shit means a lot to me.” Simply put, it was a performance for the ages.

Three short months after DJ Rashad’s unfortunate passing, DJ Spinn took to the stage on Sunday evening of Pitchfork Music Festival for what was originally billed as a DJ Rashad back-to-back DJ Spinn set. Spinn’s set was a flawless tribute, the best possible testament to exactly how good Rashad had become right before his untimely April passing at age 34. It was a set of relentless, highest gear energy, with cuts from Rashad’s 2013 masterpiece LP, the already iconic Double Cup, and Chicago’s Treated Crew and THE ERA dancers on deck to footwork the crowd into bittersweet exhaustion. Spinn opened with Rashad’s “Let It Go” before burning through their collaborative rework of Kanye West’s “On Sight.” Later, he delivered Double Cup standouts “Pass That Shit,” “Drank, Kush, Barz,” and (Rashad’s absolute finest and bullseye set closer) “Feelin,” walking off on the note of an entire Blue Stage crowd shouting, “DJ Rashad, rest in peace” with arms raised to the clouds over Chicago.

Kanye West has become the world’s most controversial pop star. People either love him or hate him, and there really isn’t much middle ground for people when it comes to his stardom. So, when Kanye decided to come back to Bonnaroo this year (his first appearance since a 2008 set when he didn’t even show up until 4am and was greeted by a scattered crowd and many boos) it was a surprise to many. Luckily, his comeback set was something special. Set to a single towering LED screen as a backdrop, Kanye’s set let his music do the talking. He ran through some of his classic hits and many tracks from last year’s Yeezus, and of course spent some time to deliver another one of his signature mid-set rants. Kanye’s 2014 performance at Bonnaroo made up for his past mistakes at the festival. It was a high-energy set for the ages.