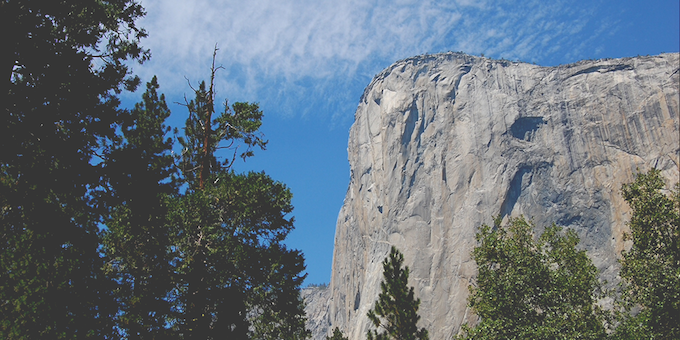 We were invited by Cliff Bar to sit down with pro climber Tommy Caldwell before his presentation about completing America’s hardest big wall route. Caldwell has been in the national spotlight since his January ascent of the storied Dawn Wall project in Yosemite, a 2,500-foot rock climb on a perilously exposed cliff face dotted with minute holds and minuscule crack systems. Caldwell was gracious enough to answer a few questions (found below) before speaking to an assortment of climbers, outdoors enthusiasts, and general public about his experience on the wall and the road that led to this historic summit.

Caldwell started the presentation with a memory from his time on the side of El Capitan. About midway through, he said, they noticed a handful of spectators congregating in Yosemite meadow, just below the wall. Soon, news trucks joined them, first a few, then a veritable parking lot. Before long, crowds were lining the cliff edge, watching them slowly inch their way up the final pitches of the month-long undertaking they were moments away from summiting.

Of course, Caldwell and his partner Jorgeson had been living thousands of feet above the ground for three weeks with no access to a shower. When he reached the top to meet a throng of supporters and news crews, he smelled, in his own words, like a toilet. He was also completely bereft of voice, having been shouting up and down to his climbing partner for weeks. Immediately, Caldwell was thrust into daytime talk show interviews, lecture circuits, and tagged in tweets from the President himself.

He left the ground as a celebrity, no doubt, but primarily in the tight-knit climbing world. 2,500 vertical feet later, he was a celebrity in the national spotlight.

What happened on the wall was covered in incredible detail, not only by the crew of Big Up Productions who were rigged up on hundreds of feet of static rope to capture the climb, but by the climbers themselves. Daily posts to Instagram from Caldwell and Jorgeson documented the process with more personal detail than we could ever recount here.

When Caldwell returned to the ground from his historic undertaking, there was a podium planted in the middle of the El Capitan meadow. It felt out of place. But then, so did Caldwell. He received rounds of handshakes from the very same park rangers that had chased him and climbers like him from Yosemite’s park grounds since the rowdy Stonemasters era of the 1970s.

Caldwell seems beleaguered, and maybe a bit puzzled by his newfound celebrity. Climbing is simply what he does. Not long ago, as he told us in our interview, he was living out of his Honda Civic with little more than 50 dollars a month. But it’s this humility that makes him so deserving of his fame. He isn’t hung up on the history of what he’s done or the insane amount of grit and dedication that such an undertaking requires. He simply “loves the way it makes him live.”

The modern culture of celebrity is such that whole PR teams are deployed to build myths around public figures. Caldwell makes his own myth, and in a bigger picture, it’s fairly mundane. He simply wants to challenge himself through climbing. But it’s the scale of the challenges that he believes possible and the sheer willpower to complete his goals that takes his passions into the annals of adventurers who dare to confront the impossible.

It’s been said millions of times over, but it bears repeating: congratulations, Mr. Caldwell. That was epic.

What is your favorite sense memory of the Dawn Wall?

I don’t know if this is my favorite, but it’s one of the most beautiful memories from it. On the seasons when we would climb it in spring, there’s this snow pack on top of the wall. When the sun would hit that it does two things: the snow starts to melt on top and kinda drip down the wall, but it also creates this crazy updraft from the thermals. I’m not sure how it all works but there’s this crazy consistent updraft for like five hours a day or six hours a day. These big gumdrop-sized water droplets would float around you and sparkle in the sun. It was almost like being in outer space. Sometimes the wind and the gravity would work just right and they would hover right in front of you, and you could grab them like that. There were so many things like that that were super beautiful up there.

You spent seven years on this. Do you have any great memories from the projecting process?

I found the route to be this amazing life-driving force. Just the fact that I was working toward this definitive goal was super cool because we’d go there and be in Yosemite working on it for three or four months a year, but then the rest of the year I’d wake up at four or five o’clock and be like, “what am I gonna do today!” I just had so much energy because of that goal.

You finished the Fitz Traverse, you completed the Dawn Wall. What is next for you? What are you doing with your time? What’s next?

These days I’m doing a lot of this kind of stuff. Doing a lot of events. I’m writing a book. I bailed on college to be a climber so now I feel like this is my time to use my brain a little bit.

How does the post-Dawn Wall process compare? Shifting gears, focusing on the lecture circuit and writing a book?

It’s disorienting for me actually. I’ve been a physical human being for so long and so goal driven. Now my goals are just different than what they’ve been.

It’s honestly a bit hard for me. I feel like people hold me on this pedestal in a way that is just strange for me a little bit. A lot of people see dollar signs in their eyes, so I’m always feeling like people are always trying to figure out how to make money off of me. It’s a strange reality for me. It wasn’t that long ago that I was living in my Honda Civic and only had like 50 dollars a month to live on.

You say that people are putting you on a pedestal. Who do you admire?

My dad is huge. He’s always been my kind of mentor and idol, and he possesses so many qualities which are just so amazing. But beyond that? I’m a total Yosemite lover. The pioneers of climbing in Yosemite like Tom Frost and Royal Robbins and Yvon Chouinard. Especially that first generation that climbed those walls for the first time and then went on to do even cooler things like starting Patagonia. That’s admirable, and at a place in my life where I’ve been climbing for so long, I’d like to think that there’s something cool that could come out of in when my fingers are no longer strong enough to pull super hard.

How do you see yourself in that legacy of climbing? Is it important to you historically? Personally?

That’s kind of a complicated question. How do I feel like it fits into it historically? I don’t put much thought into that, honestly. I’m just going out there trying to format the most rich experience I can imagine. That’s why we pick these big goals and we work on these things. They’re just rad and life-driving and fun.

It seems like you are the kind of person to always be doing something, no matter what it is. What’s the importance of adventure to you? To keep setting goals for yourself?

I’ve always had this sense that we as human beings are built to battle, and adventure is this positive outgrowth of battling. You get back there and you’re in this amazing environment. You’re working hard toward this thing and there’s a lot of drama involved. That’s the kind of stuff that lights a fire inside of you. For me, that feels like the right way to live. I can’t imagine a life without that really.

I wanted to ask about your projecting process in general, whether it’s a simple boulder problem you’re encountering or anything up to huge big wall, monster multi-pitch climbs. Do you have a system or is it a fluid thing at this point?

I’m kind of a big picture guy. The nice thing about the Dawn Wall climbing with Kevin is that he’s a very detail-oriented person. So that combination meant that we had both those things. For me, I made this goal matrix. The ultimate goal for me for so long was Dawn Wall and everything else was kind of formatted to lead to that point. But to do that, I would be like, “oh I need to get stronger at bouldering,” so I would identify all these bouldering projects. And to do those bouldering projects I had to make my fingers stronger. So I started figuring out all these finger training things and looking to the kids, to the youth that are so strong these days, and learning from them what they’re doing to push climbing to this level that is totally mind blowing to me.

We’re seeing so many strong young climbers now, Ashimia Shiraishi just got her first 5.15 – they’re trying to downgrade it as they do when a–

Yeah, every time a girl climbs something hard they try to do that.

I don’t know if this is something you necessarily want to address super in depth, but we just touched on this gender divide within climbing. Do you think that’s eroding? Is the gap narrowing? Do you think there will be a time in which very technical female climbers are surpassing their male counterparts?

I mean, it’s happened in the past. When Lynn Hill climbed The Nose it was such a huge example of something that no guy could have even got close to at that time. It was the most famous, raddest rock climb in the world and a girl did it first. In my mind that was the biggest moment in rock climbing history ever. I’m sure we’ll see that again. I think women are physically maybe even more in tune with hard rock climbing than men. I mean, being smaller is an advantage. If you think about it, an ant is a much better climber than an elephant. They’re flexible and they’re tougher – I think women are way tougher than men generally, so yeah, I think women just need to have the boldness to go out there and believe in themselves. I think sometimes that’s their struggle. And to pioneer, they don’t usually go out and do first ascents. Some do, there’s definitely exceptions.

So as the last question, what’s your favorite part about what you do?

I don’t think there’s any way to identify one part. And I think it changes, too. When I was younger maybe it was the challenge, and now it’s more the bonds you make with friends and just sort of the way it formats your life. From friendship to community to having goals to being outside, it’s just the lifestyle, I guess.

I am Humbled to be chosen as one of 2015 @natgeo Adventurers of the year. If you want to vote you can find the link in my profile. #advofyear