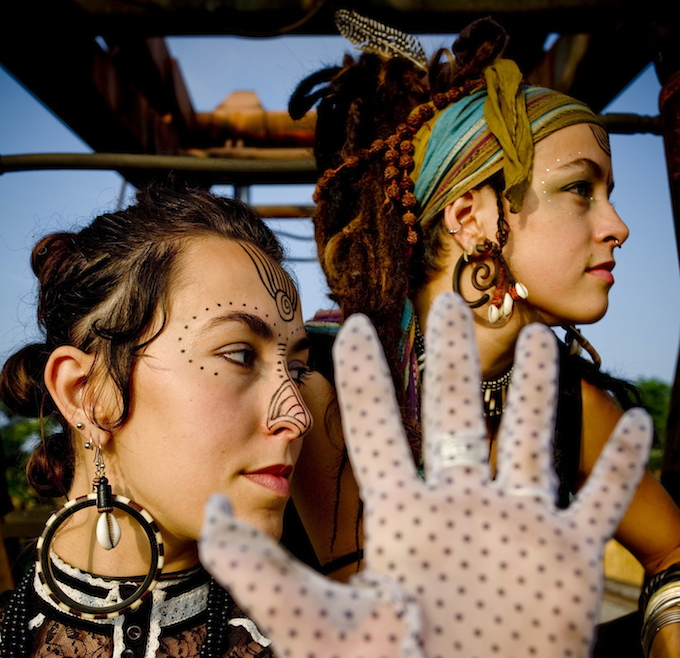 Ahead of last weekend’s Lightning in a Bottle, we spoke to sisters Leah and Chloe Smith of Rising Appalachia about their new album, Wider Circles, as well as “Slow Music,” a term they coined to encapsulate more sustainable touring practices. Although their roots are in the South, their music fearlessly fuses genres from all over the world to create a sound that defies classification.

What’s it been like being on the road the “Slow Music” way?

Leah: We’ve been pursuing an alternative travel route and touring lifestyle since the project started about 9 years ago. We just coined the term slow music because we wanted a way to encapsulate all the different desires we have in making music more of a community service. Our relationship to our work is a lot more integrated into activism.

We’ve done some train travel on this most recent tour, which has been incredible. We’ve been working on having more of a relationship with the journey itself between destinations and also working on having more of a relationship with each community as we come in. If we can have relationships with folks who are farming, we can bring local food in, local arts organizations, so that each concert has an area where there are non-profits and education initiatives. Then, in all these different ways, there’s longevity to our work and the music. And it’s not just that immediate gratification, rushed culture that we’re surrounded by. So it’s a blueprint that will continue to grow and take shape probably for the rest of our touring lives.

Do you have any train rides you recommend that you’ve taken so far?

Leah: I know there are some beautiful ones, like the one from Chicago to Colorado that we’ve been wanting to take that we haven’t been able to yet. Surprisingly enough, we were all really excited about the train ride from New Orleans to Texas. We ended up getting off near El Paso. That was a route that we’ve driven many times, but the train ride was this incredibly beautiful — empty desert landscape in all these areas of Texas that I don’t think any of us had ever seen. On the Louisiana side, we saw turtles, and alligators, and passed through these little towns where everyone came out on their porches and waved at us. It was such a different experience.

Chloe: We just started trying train rides, so we haven’t taken them except for on that Southwestern tour that we just did. That was definitely a favorite and we look forward to trying them out around the country. I know there’s a pretty famous Pacific one that hugs the coastline. 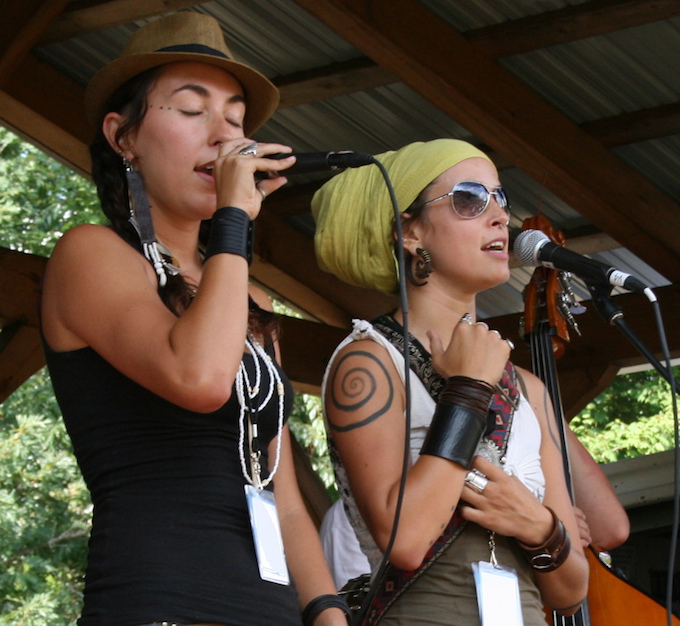 Rising Appalachia advocates for music that is more than just about sounding beautiful. There are some strong messages in there about spirituality and politics. What are some of the political themes in your new album? And why is it important for you to meld those elements together?

Chloe: Our father taught us at an early age to not do art for art’s sake. We took that in pretty early on and tried to express ourselves through our music in ways that were more than just a matter of personal storylines. Although I think that is an important part of songwriting as well, we try to open it up into a bigger dialogue.

On all of our albums, there have been a lot of different themes of environmentalism through living in the south and feeling a lot of the heavy industry things that go on in this region. There’s a song on the new album that Leah wrote called “Spirit’s Cradle” that’s about the prison industrial complex. And there are also more spiritual, subtle lyrics that are about the widening circle. It’s something that we wrote in honor and tribute to the Rilke poem, “Widening Circle,” about living your life in widening circles. Which is in tribute to the time and the generation that we all feel opening and widening and learning how to collaborate and diversify our many circles and journeys on this path.

So it’s not just a message, but more of an invitation for people to talk about these questions?

Chloe: Actually, we have a song on our new album called “An Invitation.” That’s a large part of it, inviting people to step up in their own way.

You’ve self-produced all six of your albums. What are some of the challenges and benefits of producing your own music?

Leah: I think the major benefit is creative control, and that’s something that’s been really important to us. We’ve discussed relationships with different labels and considered having producers onboard, but there is this overarching desire in the music industry that we need to get our music in a more definable genre. We really don’t have an identified genre. We pull Balkan music in with Americana folk and put in West African influences with Old Time. Our creative freedom of expression has been our main drive to keeping us producing things ourselves, and also flexing the muscle of craftsmanship and learning how to do it. Learning how to sculpt and create quality work is not something that you just know how to do. You kind of have to build up that set of muscles.

The negative that I would think of most is that we rotate through leadership, taking turns calling the shots. That can be a more awkward process, figuring out whose opinion of the four or five people in the studio is going to take leadership.

Chloe: My major challenge has always been picking which songs to put on an album. I’m famously known in the band to have 8,000 unrecorded songs that I’m ready to bring out. So I kind of have to be my own filter, or have the band be a filter and relax and let the ones that need to come out come out, and not be too attached.

What effect do you hope your music has on people?

Leah: I don’t want to be a source of answers, or not even necessarily a source of inspiration so much as a catalyst for change, for questioning, and for dialogue. And I really hope that our music can add some spice to the pot and get people thinking, get them asking questions, get them moving, collaborating. That would be what I’d be so excited and inspired to see happening. And I hope to also get it from our artistic friends and peers. Just a nudge to get everything just a little bit more dialed in.

Chloe: To both sooth and ignite. That’s the double sided part of the work that I feel like I’m excited about. It’s something we work very hard to build into our set list which is part meditation, heart-calming, opening songs and harmony, and then part lyrical calls to action and like Leah said, questioning and being activated. And dance parties. And uplifting/pensive process.