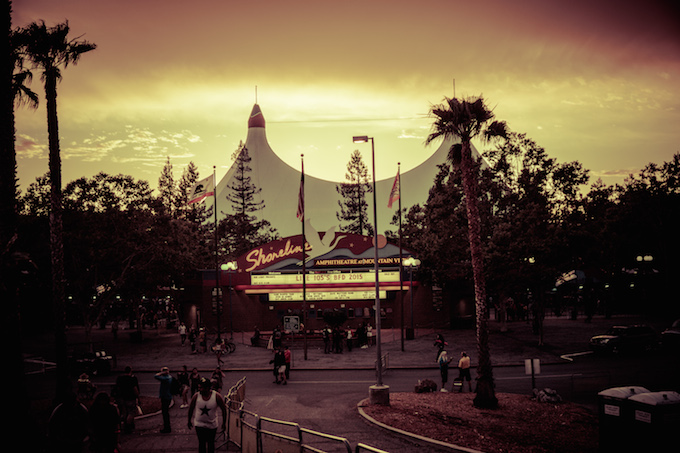 We had the honor of interviewing local band Eyes On The Shore at last weekend’s Live 105 BFD at the Shoreline Amphitheater. The San Francisco-based outfit released their debut album, A Golden Blue, in January of this year and are hitting the road this summer to play shows through the Southwest and all along the West Coast. Read the full interview below and catch them at their homecoming show at Slim’s in San Francisco on August 22nd! 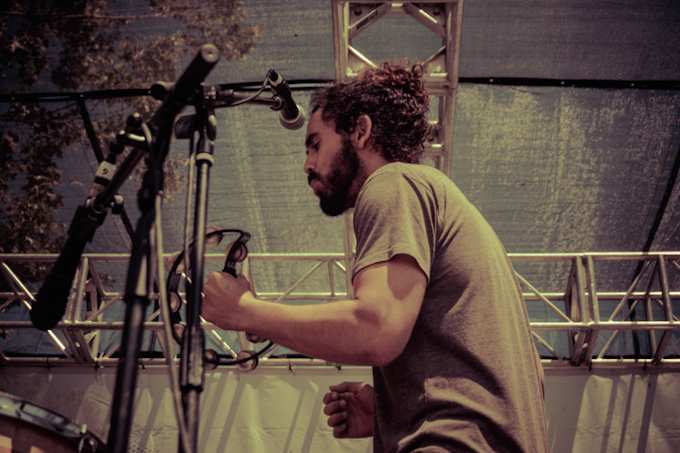 You’re playing a lot of live shows right now. How important is having that connection with the audience for you?

Kayhan: It’s one of our top priorities for the live shows. We think of songwriting in terms of making it fun and dancy but also bringing a lot of power because most of our favorite bands are some of the best live bands. We love live music.

Cory: Think of how marginalized the music industry is in general and now you can pretty much make something out of nothing. The live shows are really the only thing we have left to do something unique or real. That’s our number one priority to connect with the fans.

Kayhan: Yeah, we were in the studio for a long time and we made a record and released it in January so now the mindset has been all around the live show.

Tell us about your connection with Live 105!

Kayhan: We go back with Live 105. They have been incredibly supportive of us. They played a song off of our EP. In 2013 we had a song called “Jigsaw.” Aaron Axelsen is incredible. He is near the center of everything about the Bay Area music scene. He knows all the bands and has his ears to the ground. And this festival is great because it has the most local talent I have ever seen at a music festival anywhere. We have a song called ‘Kids on the Run’ and a music video is about it come out this summer in July and Aaron Axelsen heard that song, I just emailed it to him on a whim and he spun it on his show Sunday Night Soundcheck and booked us immediately for this festival. That was six months ago, so we love you, Live 105!

Being a San Francisco-based band, how has the music scene here influenced you?

Kyle: Venue wise, we’ve been playing Bottom of the Hill, that’s kind of home base for us. Also Slim’s and The Great American Music Hall and The Independent, these venues are so classic for the city.

Cory: The history of the venues is built into San Francisco and the history and the culture that come through has us striving for something that’s different and unique in certain ways but also accessible. It has a large influence on how we digest music and how we write music.

Kayhan: There’s a lot of diversity. There’s so much going on in San Francisco and it’s not just music. When you go to LA and NY, those are the cities to be in as a musician of course. San Francisco is more of a hodge podge of things. It doesn’t feel like there’s one specific scene which is not a bad thing. Not just because we live in San Francisco but anytime we play there it feels like coming home, ‘cos the venues are just very relaxed. Everyone’s agenda is very clear. It’s not as cut-throat as when you go to LA for example, it can be very business, which is also fun in a different way. But the venues here — we used to play Hotel Utah a lot and it just felt like home – very casual. And we did Slim’s and the hospitality there was incredible. The doors were very open. It’s cold in San Francisco though (laughs). 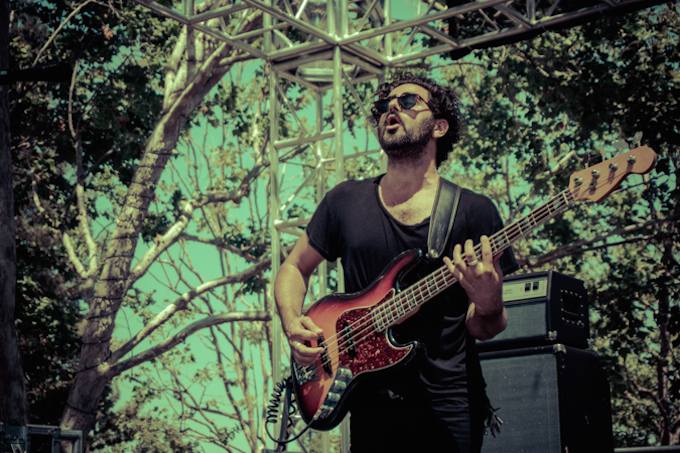 Eyes On The Shore has been around for 14 years now in different constellations but you released your first album earlier this year.

Antrom: Kayhan and I have been playing since we were 15 – We had a project called Ambiance that disbanded in 2010 and then we basically went on the search for a vocalist and found Cory and all together after finding Kyle it took another year and a half to establish as a band in this line-up.

Kayhan: We debuted in 2013 with the EP and then put out “A Golden Blue” in the beginning of the year. Kyle joined the band a year and a half ago and we have been nonstop ever since and pretty much living in a van.

How does it feel to finally be able to say “We released an album,” after making music for so long?

Antrom: It feels amazing. Most of us have never released an album and we have been making music for a long time. So for all of us, it was a dream come true. We finally have the team to make that happen. And in a professional setting to do something like that, in a real studio, even to get crowd funded — The whole concept feels like we’re finding our career and pursuing it.

Kayhan: I think there’s something sacred in my heart about making an album and not just putting out another EP or a single. You go back in time in the last 16 years of recorded music and the record is the final product that you spent all that time writing and putting your energy to it and doing a nice track listing. We didn’t have a concept record but we still wanted to have a nice flow to it. It’s cool to put that down and have 12 songs at the end of it that we’re proud of. There are so many other songs that didn’t make it but it’s obviously part of the process.

Cory: I think it’s the biggest desire as a musician in general. It’s the highest acclaim to actually do a full-length record. That’s what people look back on — great records.

Kayhan: Yeah it tells a story. It takes you somewhere.

Antrom: Which is more and more difficult with how disposable everything is in this world. Having something piled up together in an album bookmarks a chapter in a way for us.

Kayhan: One of our first album reviews that we got was from Mind Equals Blown and they suggested to listen to the whole album ‘A Golden Blue’ from first to last and kind of enjoy the album as a whole and not just every song individually.

Cory: Hopefully we can play a part in history, moving forward with that kind of mindset. Especially the singles with how marginalized everything can be.

Antrom: I feel this wave. Like Neil Young what he’s doing with music and sound, everyone moving back to LPs. I feel like there’s this flow moving back towards depth and art in general.

Kayhan: That’s the tagline for this whole interview right there (laughs). 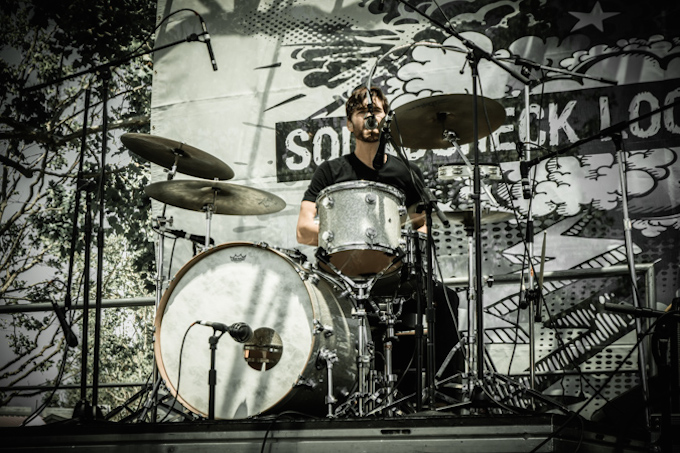 What’s your process of writing songs?

Kyle: Still figuring it out.

Kayhan: I don’t think we’ll ever stop learning and figuring out how to grow but yeah it’s a collective process. We’re all equal contributors. We all get our hands dirty. Sometimes there’s opposition but for the most part we all get inspired by each other and it could start with a rhythm, a melody on any instrument or a voice and the good ones usually stick and we always remember them and we just keep beating them until it just comes out.

Cory: It usually comes out in really good jams. Like someone brings in one really solid melody or idea and when everyone brings their part in, we all get really excited and stoked and then it blossoms and then everyone has their heart in it. Those are usually the ones that work out pretty well.

Antrom: There are also the ones that don’t get old. I feel like one person’s hesitation about it can lead to a really good process.

Kayhan: I think we’ve been learning to let the vulnerable moments come out a little bit more. I read this interview with Rick Reuben and basically he said that it has to come from the heart. You have to strip away the media consciousness and go straight to that feel. And we are very feel oriented. It’s part of our process and that’s where all the good stuff comes from and then once we get all that magic juju down, we can start thinking about it and elaborate on it.

Antrom: Sculpt it without losing the vibe and the inspiration.

You guys have known each other for many years. In what ways does your friendship influence your music?

Antrom: I think ultimately we find ways to support each other. We’ve gone through a phase of finding a way to come together and support our strengths and we are now kind of engaging that with Cory and Kyle. We put all the bullshit aside and we’re working on really coming together and bridge little gaps. It’s about that support.

Kyle: And focusing on making the song the most important thing.

Kayhan: Yeah, this has been the first year we’ve been on tour. We drove 4000 miles to Texas, did a week of shows, playing three shows a day and when you’re living in a van with all the guys…I think what I personally learned is to just enjoy the process and just invest in the friendship. I think that goes hand in hand because the writing is a lot more clear and powerful when you don’t leave room for the bullshit. It’s tough to put egos in check and we’re all emotional people in our own ways, but we’ve been investing in our process and it’s been good so far. Hopefully continues that way (laughs).

Which artists have inspired you and who are you looking forward to seeing at BFD?

Cory: Cold War Kids and Modest Mouse are big ones for me.

Kayhan: Cold War Kids are a cool band from Long Beach. They have this groovy, bluesy style with a lot of soul.

Kyle: Local band stage too. Those are people we look up to and kind of want to network with but also find ways to do things differently from other bands

Kayhan: I want to check out the electronic stage. I have no idea who’s over there but it would be kind of cool to see that too. 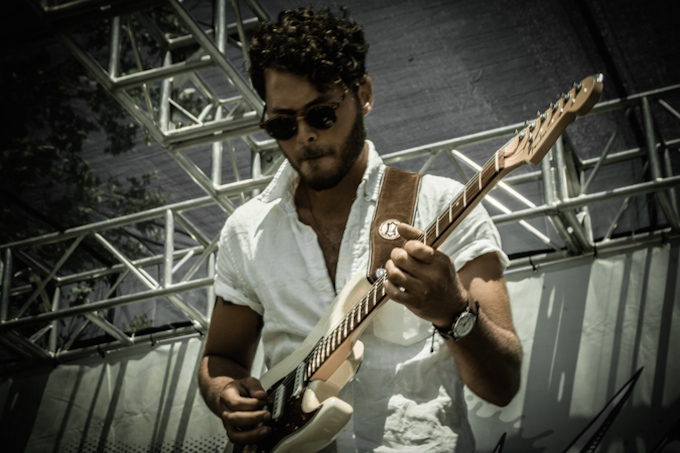 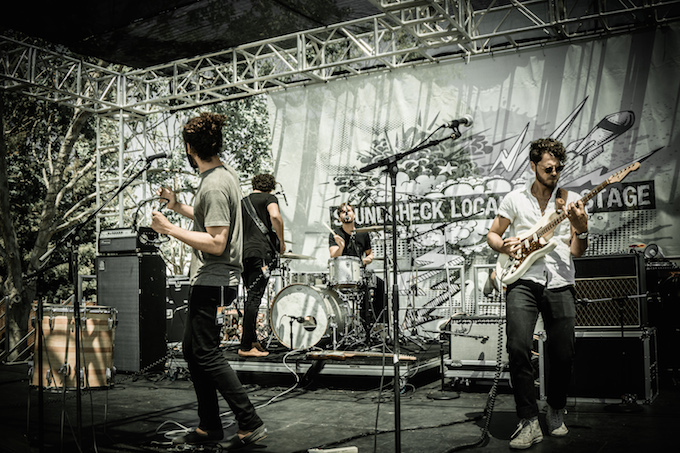 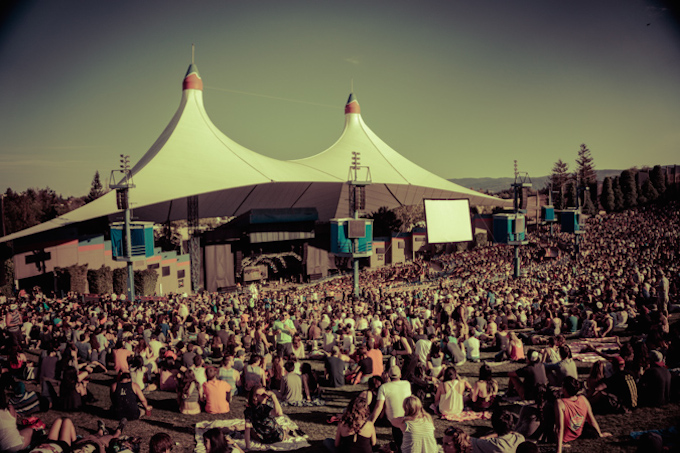