Fall is in full swing but that doesn’t mean the fun is over. Here’s some event inspiration: Our picks for the best October festivals in the World, made just for you. Go forth eventseekers! May the adventure and music never end. 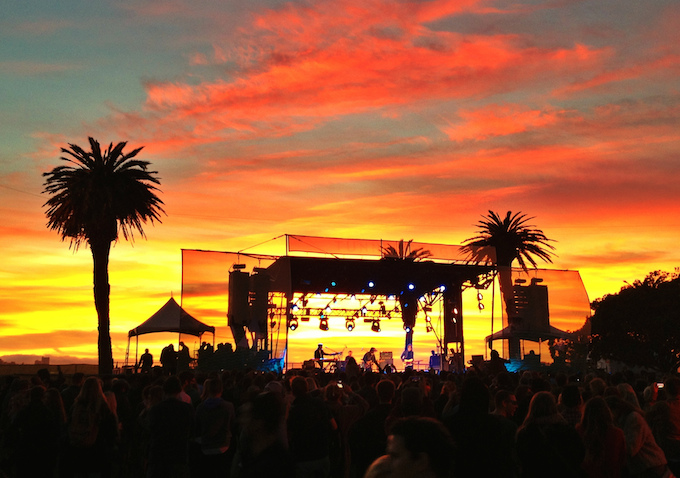 1 // Oktoberfest // Munich, Germany
Dates: September 19th – October 4th 2015
Details: There’s no need to explain this festival. It’s designed for any beer lover. Indeed, it is a celebration of Bavarian beer from Munich’s finest breweries. Each year, over the course of 16 days, around six million liters of beer is consumed by festival-goers from around the world. What most people don’t know is that Oktoberfest isn’t only about beer — The festival also highlights German cuisine, such as Steckerlfish (grilled fish on a stick), Schweinshaxe (grilled ham hock), or Hendl (roast chicken), and includes various parades with folk costumes, games, and traditional music. So, dear Epicurean, before packing your suitcase, make sure you’re ready for an unforgettable hangover.

2 // Waves Vienna // Vienna, Austria
Dates: From September 30th – October 4th, 2015
Details: This year, Waves Vienna celebrates its fourth year by combining music with an international conference. This year the topic is, “East Meets West”, and the event will be focused on the Baltic block of Estonia, Lithuania and Latvia with representatives from each country as special guests. The lineup is packed with alternative, electronic and rock artists from around the world such as, Austra, Little Boots, Ebony Bones, Young Rebel Set, and more. The artists will be performing in series of music venues, 12 stages along the Ring Road in Vienna’s first district, and on 10 stages in Bratislava. In only four days, 180 acts will attract around 10 000 visitors.

3 // Rocking the Daisies // Darling, Western Cape, South Africa
Dates: October 1-4, 2015
Details: Rocking the Daisies is the premier eco-friendly music and lifestyle festival. This year marks the 10th year of the festival, and so this event is going to be bigger than any other edition. Rocking the Daisies will feature three new stages and a very special surprise planned for Saturday, the 3rd. The lineup includes The Kooks, Milky Chance, Cat Empire, Thomas Jack, Scuba, and more. With well over 10,000 people attending, the festival spreads the message of “play hard, tread lightly” by incorporating innovative, environmentally-conscious practices into the four-day event. With solar and wind powered electricity, bio-diesel generators and an advanced recycling system, Rocking the Daisies proves that we can have fun and still being responsible for our planet.

4 // Austin City Limits // Austin, Texas, USA
Dates: October 2-4, 2015 / October 9-11, 2015
Details: Held in Zilker Park in the heart of Austin, this annual music festival is one of the biggest music events of the year. Created in 2012, the festival grows each years, attracting more people with an emphasis on family-friendly vibes. This year, headliners like Foo Fighters, Drake, The Strokes, Florence + The Machine, Hozier and Disclosure lead a cross-genre over a massive eight-stage setup.

5 // Robot Festival // Bologna, Italy
Dates: October 7-10, 2015
Details: Robot Festival is one of the most intimate and progressive arts and electronic festival around. In addition to music, the schedule includes film, digital installations and workshops. 100 artists, including The Martinez Brothers, Holly Herndon, Apparat, Nina Kraviz, and more, are set to perform. Robot Festival exhibits an intense interactions between the various arts and the importance of being open to new experiences. It’s a family-friendly event that takes place in the historic and beautiful city of Bologna, which serves as a bridge between the past and future of art.

6 // Nuits Sonores // Tangier, Morocco
Dates: October 8-11, 2015
Details: For the third edition of Nuits Sonores, the objective is the same: develop a cultural event between Europe and the Maghreb. Nuits Sonore is a free festival dedicated to the youth of Tangier and Morocco. It takes place in one of the jewels of the historical heritage of the city: The Moulay Hafid Palace, also known as the Institutions Italian Palace. The festival seeks to elevate and shed light on women and their role in arts and culture, as well as the historical and industrial heritage of Tangier, while also promoting the artistic exchange and collaboration between Moroccan, North African and European youth. Musically, the fest brings together various genres, such as ambient electronic, techno and house, into one lineup that feature international artists such as Alban, Crocodiles, Eva from Morocco, Para One and Ninos du Brasil.

7 // MDRNTY // Gstaad, Switzerland
Dates: October 10-11, 2015
Details: For the past 9 years, MDRNTY has reflected the current electronic and house music trends. Held multiple time a year in various natural settings, the festival offers a unique and once in a lifetime chance to party in some of the most beautiful places on earth. For the Swiss edition of MDRNTY, the festival takes audiences to a mountaintop in Gstaad Switzerland, where they’ll be treated to a fantastic 360 degree panoramic view of the Bernese Oberland Alps. At this breathtaking location, a natural rooftop of the world, Swiss artists such as Kenny Glasgow, Margaret Dygas, Maceo Plex and Alci will entertain ravers all night long.

8 // Imagination Festival // Prague, Czech Republic
Dates: October 16, 2015
Details: Imagination Festival is an indoor festival that features harder EDM styles. Combining modern electronic musical genres, such as drum and bass, dub-step and hardcore, the festival brings together various artists over three stages for a complete audiovisual experience. More than 25 international headliners will be present for this fourth edition, including Netsky, Angerfist, Maduk, Tha Playah, Dimension and The Panacea. Be ready for an 11-hour dance marathon in a cavernous space.

9 // World Trance Winter // Avignon, France
Dates: October 17, 2015
Details: For this new edition of World Trance Winter, 20 French and international artists, such as Juno Reactor, Protonica, Gonzi, Burn In Noise and Once Upon A Time are set to come together on two stages. Complete with colorful, tripped-out visual effects, the World Trance Winter festival will take over the amazing Parc des Expositions in the heart of Avignon, the City of Popes.

10 // Treasure Island Music Festival // San Francisco, CA
Dates: October 17-18, 2015
Details: Located on Treasure Island in the San Francisco Bay, this annual music festival is a must-see event. Celebrating its ninth year, the fest will feature famous acts such as Fka Twigs, Deadmaus5, The National, Gorgon City and Panda Bear over two days with two different ambiances. The first day is focused on electronic and hip-hop while the second is influenced by rock and indie music. The artists will perform on two stages, all with a backdrop of the San Francisco skyline. Emphasizing sustainability, the organizers provide zero emissions bus services to and from the festival grounds while also utilizing an advanced composing system.

11 // Elevate // Graz, Austria
Dates: October 22-26, 2015
Details: For a decade years, Elevate has been combining contemporary music, arts and political discourse into one event. Held in different venues around Schlossberg in Graz, the festival is a not-for-profit association, and is therefore free of charge. With an ambiance that mixes the latest in EDM and indie, the festival is headlined by international artist such as Sigha, DJ Funk, RP Boo, The Black Madonna, Chra, and more. In addition to music, the festival offers a platform for public minds and voices to be heard on issues of politics, the environment and culture. It even offers awards in three categories: The International Elevate Award, the Elevate Award Steiermark, and the Elevate Activism Award, encouraging people to be involved.

12 // Movement Torino Music Festival // Torino, Italy
Dates: From October, 24 – November 1, 2015
Details: Movement is an electronic music festival that was founded in 2006. It’s considered the European cousin of the iconic Detroit Electronic Music Festival (DEMF), which was launched in 2000. For the 2015 edition, the festival will take place at the Lingotto Fiere Turin Exhibition Center. Combining dance, culture and music, Movement Turin features EDM leaders like Alan Fitzpatrick, Nina Kraviz, Tale of Us and Nastia.

13 // Pitchfork Music Festival Paris // Paris, France
Dates: October 29-31, 2015
Details: Pitchfork Music Festival Paris is the European spinoff of Pitchfork magazine’s original festival, which suavely takes place during summertime in Chicago. Now in its fifth year, Pitchfork Paris will be taking over the Grande Halle de la Villette, a stunning 19th century glass and metal structure. A showcase of contemporary music, the festival mixes various genres such as techno, experimental house, acoustic pop and of course, pure rock. In the heart of the French capital, internationally acclaimed artists, such as Beach House, Thom Yorke, Ratatat, Run The Jewels and Laurent Garnier will be perform in an ambiance that is “à la Française”.

14 // WeAre Together // Marseille, France
Dates: October 31 – November 1, 2015
Details: WeAre Together is a music festival with a very fitting name– It’s held in Marseille, a city of southern France that’s known for its warm people and famous singsong accent. Established in 2011, the festival quickly became the essential gathering point for electronic music fans. Bringing together artists who known all over the world, such as Fritz Kalkbrenner, N’To, Kenny Larkin, Worakls, Joachim Pastor and Broken Back, and held the day of Halloween in the unique venue of Dock des Suds, WeAre Together offers a festive ambiance that resembles the set of a horror movie.

15 // Haunted Hotel Ball // Phoenix, Arizona
Dates: October 30-31, 2015
Details: The Haunted Hotel Ball a premier Halloween party for adults. Held over two days at The Saguaro Scottsdale Hotel in Phoenix, the festival encompasses three epic parties designed to transport party-goers into a fantasy land. The Haunted Hotel Ball is powered by the eccentric public, who always show up in elaborate costumes for various events, including a lingerie fashion show, a masquerade pool party, and a $2,500-prize costume contest, making this fest a memorable experience for any Halloween junkie. Come get lost in the three uniquely themes rooms and enjoy the company of interactive performers. Forget the rules and free your imagination for a couple nights of debauchery. But shh! Behind your masks and make-up, everything that happens in the Haunted Hotel Ball stays in the rooms of this hotel… Check back in a couple weeks for an exclusive eventseeker giveaway to this haunted charade!