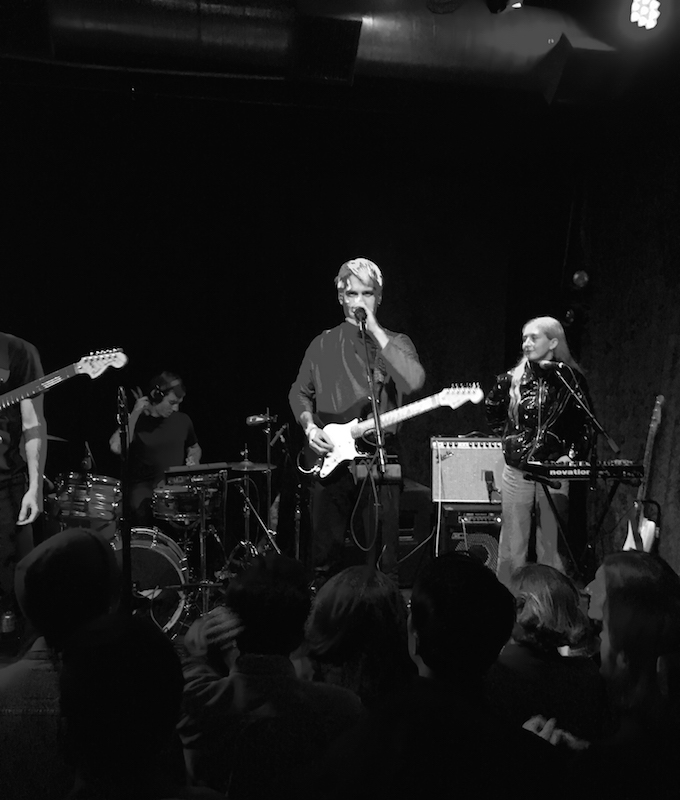 A little spilt beer never hurt anybody, especially when you’re hypnotized and grooving side by side with audience members from the mesmerizing sounds of the Porches tour. On Monday night, March 28, the tour rolled through the Rickshaw Stop in San Francisco for a sold out show thanks to artists Your Friend., Alex G, and of course, Porches.

Taryn Miller, a 24-year-old musician and singer from Lawrence, Kansas makes music under the name Your Friend. Her set was smooth with mellow drums and a lovely voice. Knowing all the words to her songs, fans sang along with her the whole set. She had a bright glow to her on stage as she could feel the love from the audience. “The tour so far has been amazing and I want to thank you for the love and support,” said Miller.

Singer/songwriter Alex Giannascoli from Philadelphia goes by Alex G, and he can rock the guitar and sing like no other. His piercing songs came packed with hard-hitting rhythms and lyrics. Along with a full band, he performed “Baby, It’s Cold outside,” sinking into a focused sedated mode but sending fans into raving fits of joy. The band had great cohesiveness the whole night and huddled up a few times to decide on what other hidden gems it should reveal to the crowd.

His guitar style is a work of art. With extreme dexterity, he makes it seem as if he can shred non-stop. Giannascoli dug into his feelings with a crowd favorite song called “Mary.” To end the night he unleashed a hilarious song that he said was about finding your best friend and girlfriend covered in peanut butter in your bedroom. This description captured the attention and laugher of everyone in the crowd. Giannascoli went on to say that it represented “progressive art.”

New York-based singer/songwriter Aaron Maine aka Porches hit the stage in jeans, a turtle neck, and beach blonde hair. Before performing each song he would always demo a dance and the crowd would follow his moves. Maine’s angel-like voice had the crowd tuned in the whole night.

His old school pop sounds were infectious. Maine started off with the song “Glow,” moving the audience to sway from left to right with themes of truth and love. Halfway through the set he had a musician named Bo come up on stage to play the saxophone. The result was such a diverse yet cohesive sound that it seemed as it they had been making music together for years. Turns out, they had only met earlier that day.

Maine had one request at the end of the night: During his last song, he wanted everyone in the crowd to lie down and get comfortable. It seemed impossible with such a packed house but the fans made it happen. He went on to lie down as well and somehow still managed to sing his dreamy lyrics with the same charisma. Maine went on to thank fans for coming out tonight and said, “This town feels like Spain, but in a good way.”

We all know a true sign of a great show is when fans go crazy asking for one last song. As we all patiently waited, our emotions heightened, Maine hit the stage one last time.

“I felt really good on stage and the show was beautiful and the crowd was cool,” said Maine.

For the latest updates on your favorite musicians, sports teams, comedians and more, download the eventseeker app for iPhone, Windows, or Android and become a tastemaker among your friends. Think of us as your personal advisor for music and events.