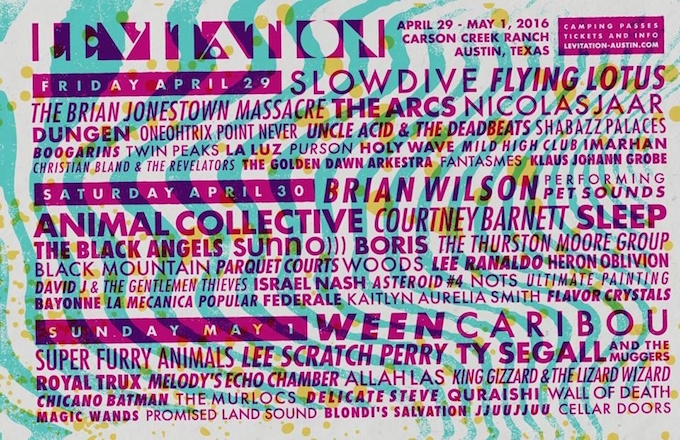 UPDATE: Levitation 2016 has been cancelled. The following message was posted to the official website on Thursday, April 28: “Due to safety concerns regarding dangerous weather, Levitation 2016 has been canceled. This decision is heartbreaking, but it’s a decision officials have made for the safety of festival attendees, and safety is our first priority.” Please visit the festival’s official website for more information: http://levitation-austin.com/

***
Presented by The Reverberation Appreciation Society, Levitation is an annual music festival that began in Austin, Texas. The festival, formerly known as Austin Psych Fest, was founded as a single-day event in 2008 and has since grown into a three-day affair and spread to cities around the world. There’s now a Levitation France, Vancouver and Chicago, but the original incarnation of the festival is going down in Austin from April 29 to May 1, 2016. The event is spread over three stages located on Carson Creek Ranch: The Reverberation Stage, Levitation Tent, and Elevation Amphitheatre. With music playing simultaneously on each stage, the lineup is stacked from top to bottom with national headliners and underground heroes. Before you go off and enjoy the art installations, vendors, camping and various local foods and drinks, be sure you’re at the proper stage to catch these five must-see artists.

1 // Brian Wilson
Where: Reverberation Stage
When: Saturday, April 30, 9:35 pm
In honor of the 50th anniversary of Pet Sounds, legendary songwriter and pioneer of rock and roll Brian Wilson will be performing the 1966 masterpiece from start to finish. After rising to meteoric fame with the Beach Boys and then falling from grace with a series of mental health issues and sadistic management, Wilson is back to doing what he does best. He’ll be playing fan favorites and hits from his 54-year career as chief songwriter for the Beach Boys and a solo artist. Besides all the iconic cuts from Pet Sounds, Wilson will definitely play to his strengths with other Beach Boy gems like “Don’t Worry Baby” and “Good Vibrations.”

2 // Flying Lotus
Where: Levitation Tent
When: Friday, April 29, 11:45pm
Flying Lotus is an electronic music producer who knows how to move crowds with both remixes and original compositions. He’s been in the game for 10 years and helped take EDM from crowded warehouses to festival stages. He pours soul into his live sets and always pairs the music with tripped-out visuals so audiences can feel every beat. Songs like “The Protest,” and “Coronus, The Terminator,” off his 2014 album, You’re Dead! always get the late-night crowd going with a second wind. Flying Lotus has the last set of the night, so be ready to end your Friday night with a bang.

3 // The Black Angels
Where: Reverberation Stage
When: Saturday, April 30, 7:45pm
The hometown heroes The Black Angels hail from Austin, Texas and started Austin Psych Fest back in 2008. The band has mastered the neo-psychedelic aesthetic with its own signature sonic tapestry of reverb, distortion and the occasional blood-curdling scream. When a band plays at home, there’s always an undercurrent of pressure for them to deliver a show-stopping performance. As the visionaries of the festival, The Black Angels always know how to please the Levitation crowd with fan favorites like “Evil Things,” a stand-out track off of the band’s last LP, Indigo Meadow from 2013. Be prepared for a psychedelic sing-along in the band’s backyard.

4 // Courtney Barnett
Where: Reverberation Stage
When: Saturday, April 30, 6:05pm
Australian singer/songwriter Courtney Barnett has captivated the world with her stream-of-consciousness songwriting. Her effortless vocals and lyrics offer listeners a window into her world. She’s been playing the biggest festivals and most iconic music halls around the world in support of her 2015 album Sometimes I Sit and Think, and Sometimes I Just Sit, so she’ll be ready to win over the Levitation crowd with her Saturday night set. If you’re into grungy guitar riffs and matter-of-fact delivery, don’t miss this set!

5 // Chicano Batman
Where: Levitation Tent
When: Sunday, May 1, 5:25pm
Don’t be fooled by the ruffled quinceanera tuxedos. Chicano Batman may have a 1960’s prom look, but the LA-based band has perfected the art of the tropical slow jam. The band offers gentle harmonies, smooth guitar and organ inter-play, and bedroom lyrics in both English and Spanish. After collecting a diverse, international following on tour with Jack White in 2015, the band has proved itself to be a true fusion act with cross-over potential in the underground of LA, to Europe and the greater Latin American scene.