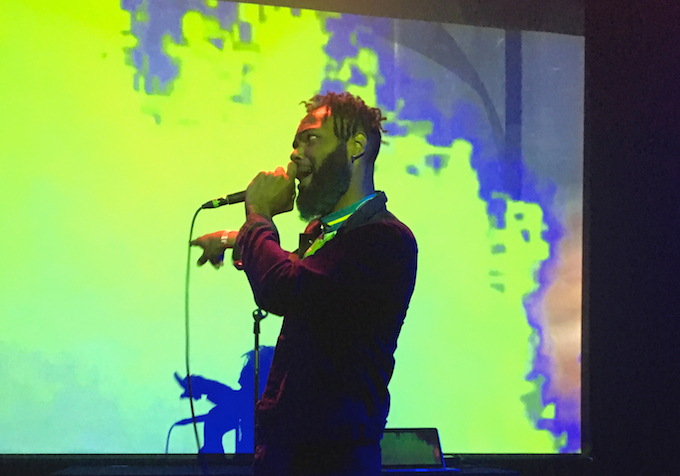 Rome Fortune and The Range took the San Francisco crowd at Rickshaw Stop on a sonic journey last Thursday, May 5. Both artists had fans locked in to each song throughout the entire night.

Electronica producer The Range hit the stage first and entertained the audience with his unorthodox setup. Armed with his laptop, he stood behind a see-through screen that projected visuals over his shoulders and head, making his physical self part of the multi-sensory experience instead of obscuring it in a wash of lights. He used his signature formula of live beats and Youtube vocal samples to move the crowd. Often switching tempos, The Range had the crowd dancing with songs like the single “Five Four,” off of his latest album Potential. Between visuals of clouds and space, which made it feel as if the audience was flying through the sky, he utilized projections of young African American men who spoke out racism and oppression in the modern day US. To end his set The Range switched up the style from dark and political to more uplifting and hopeful with the track “Florida.” As he wrapped up, he thanked fans for the love, but we were more thankful for the virtual experience.

With green hair and a green beard, hip-hop artist Rome Fortune definitely got weird Thursday night. “You’ve never seen anybody with a green beard and I promise I’m not a unicorn,” he said, greeting the crowd and getting everyone pumped up for the main event. The Philadelphia-born and Atlanta-based rapper had no gimmicks or tricks to work the audience. His loose dance moves, modest projections and not-so-subtle fusion of trap beats and raunchy lyrics were all he needed to captivate the room. He had the whole venue jumping and singing along to one of his newest songs “Blicka Blicka,” and the undeniable fan-favorite “Drake Lil B.” The crowd went crazy over the later as he referenced and ragged on his fellow rappers. Throughout the show Rome Fortune counted down the songs he had left, and as he got closer and closer to the end of the set list, the audience demanded to hear hit song “Dance” with increasing intensity. Unsurprisingly, he saved the heavy-hitter for last and had the room pulsating as if the night had just started.