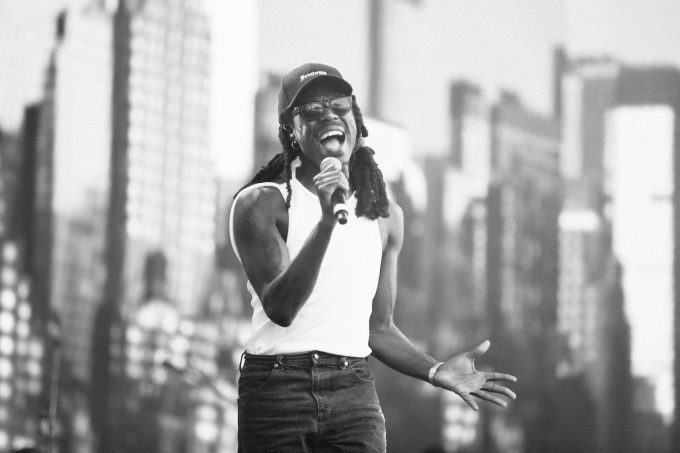 Killer Mike and Brooklyn native El-P exceeded their reputations as fantastic live performers on Sunday afternoon of Panorama NYC, delivering the highest-energy act of the weekend. Rolling out to their self-titled track, Killer Mike thundered, “We came to burn this stage to the ground” and kept the intensity at that level for the entire set. The performance encompassed both Run the Jewels LPs and inspired a few mosh pits in the first 10 feet of the crowd. They sarcastically apologized to the first few rows for thinking they would get a more sedated performance. “You came to the fucked-up rap show. Maybe plan ahead next time.” As expected, the duo also went political. They led the crowd on an anti-Trump slogan and after discussing the politicians still in the race, got the crowd chanting a rendition of the titular chorus to “Lie, Cheat, Steal.” A-grade stage banter and probably the most interaction the crowd had seen all weekend from any artist. 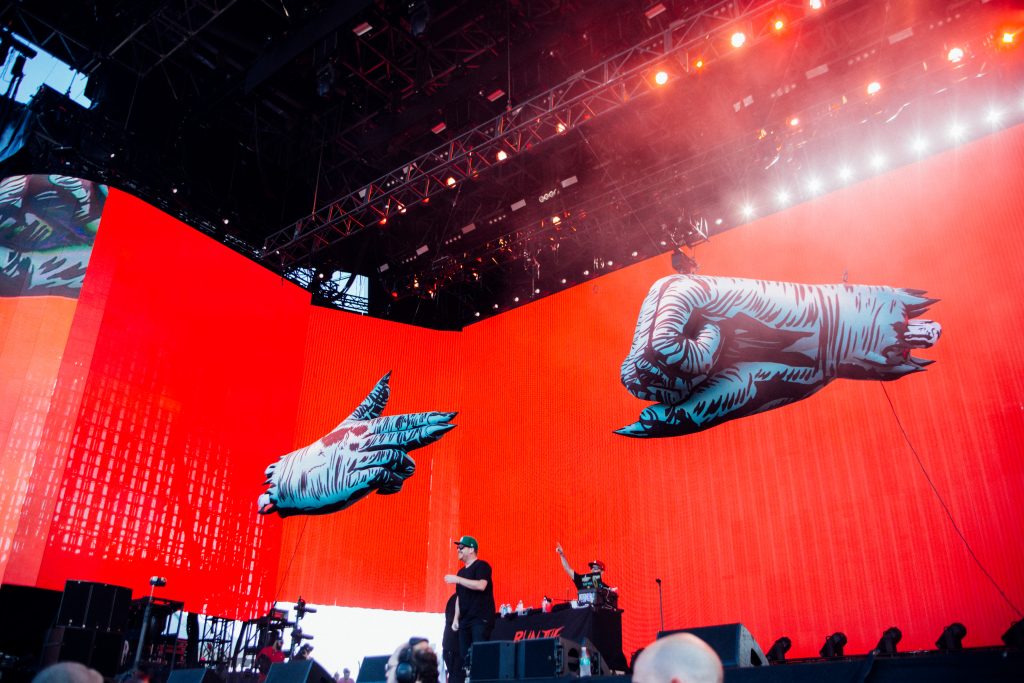 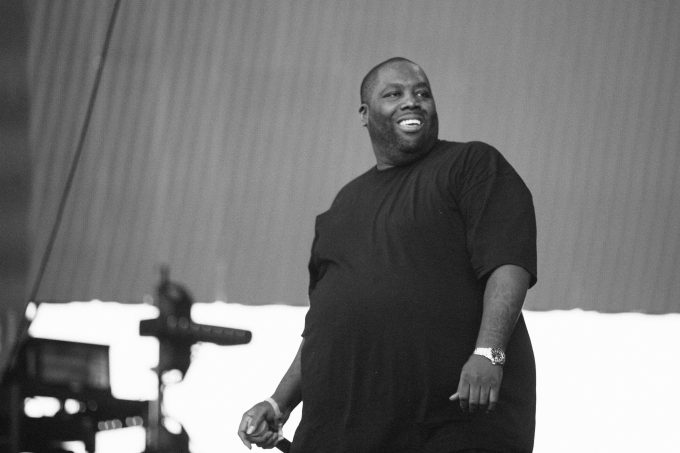 A quick disclosure of bias: I waited in this crowd with high expectations. This Saturday evening set needed to make up for all the times I’ve missed Sufjan’s lauded performances over my many years of fandom. Unequivocally, this performance met that benchmark.
It quickly surpassed almost every other Panorama artist in sonic and visual excellence, and established itself as one of the heaviest performers of the entire weekend. Sufjan—heavier than Algiers, dronier and more experimental than Kurt Vile. Five minutes in, here’s the melancholy, slightly twee songwriter of “Seven Swans” smashed a banjo to pieces as distorted guitars and bass synths ripped across the crowd.
Performing in front of mesmerizing starry backdrops, every song in the setlist differed in major ways from the album versions. With instrumentation most closely related to his “Age of Adz” sound, Sufjan and his psychedelically costumed band delivered distinct and memorable performances in the catalog-spanning set. Naturally, they closed with “Chicago.” We fell in love again. 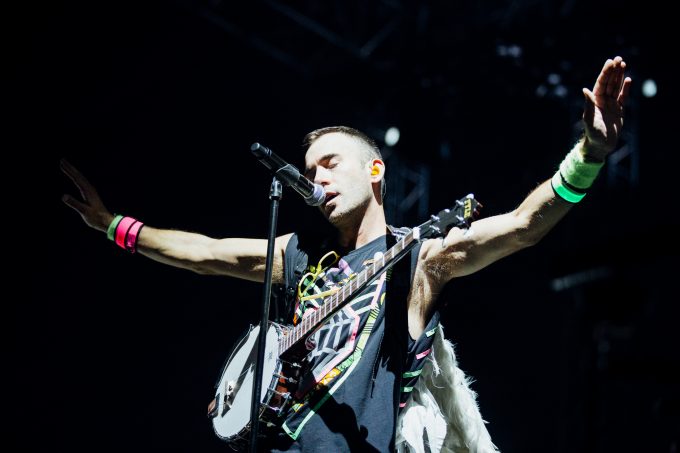 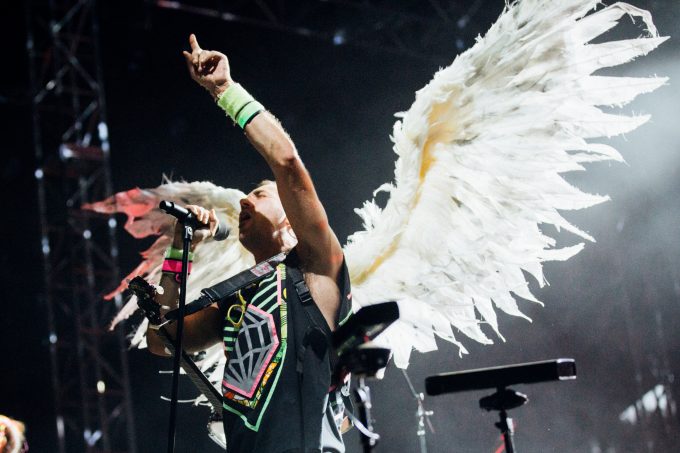 Following a day that included the bombast of Arcade Fire and the twerking pyrotechnics of Major Lazer, Dev Hynes’ appearance at Panorama carried an aura of understatement to the main stage. From the comparatively plain outfits he and his backing band wore (a women’s tank top and black cutoffs for Dev) to the simple band structure, nothing gave the Blood Orange set any help in the spectacle department. But Dev Hynes’ charisma, musicianship, and fluidity as a performer helped Blood Orange completely own the stage Saturday afternoon. The production included many of the audio samples from “Freetown Sound,” including the poetry intro of Ashlee Haze on “By Ourselves.” Favorites like “Chamankay” from the catchier and ostensibly less political “Cupid Deluxe” still dominated the setlist, however. 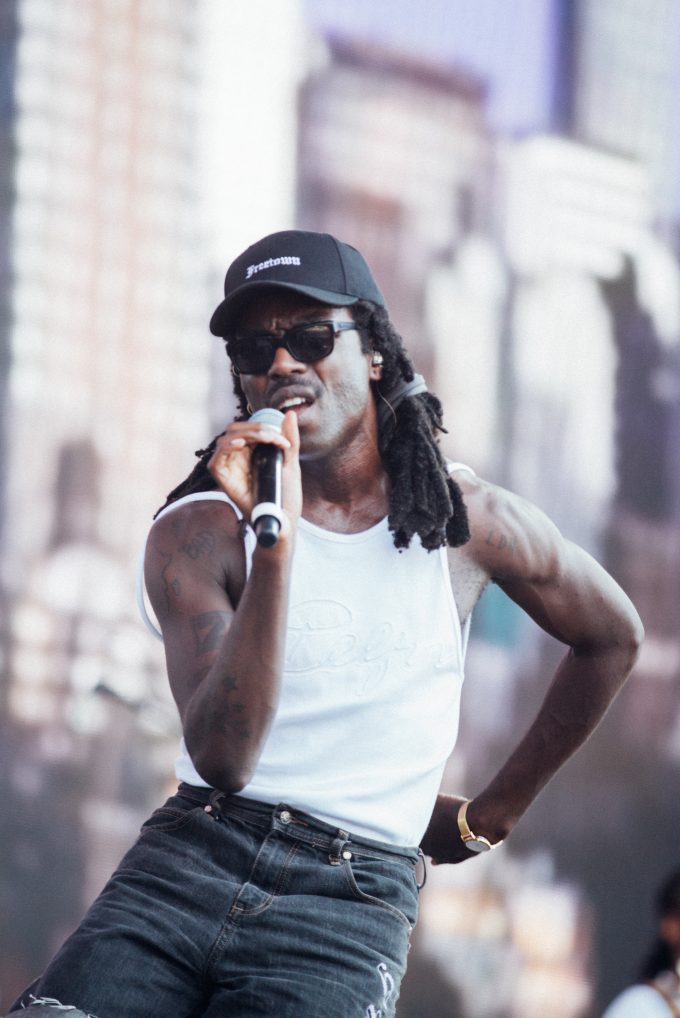 What can be said about one of the most dynamic and critically-acclaimed rappers of the past year that hasn’t been said already? Kendrick delivered a fantastic set to close Saturday night, led off with “untitled 07 | 2014 – 2016” and accompanied by video clips of the Reagans, Oprah, and Ron Artest. The live backing band gave him the space to surprise the audience with some improvised instrumentals and jams in a set that reached through his early discography, “good kid, m.A.A.d city,” and 2015’s “To Pimp a Butterfly.” The whole field around the main stage sang along to the lyrics among a bloom of phones, continuously lifted above the crowd level taking video and pictures during this set. Kendrick closed with “Alright,” the crowd prayerfully shouting along to the chorus. 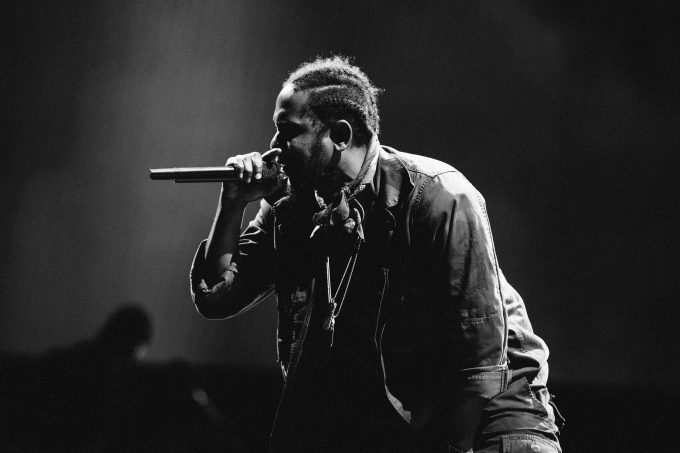 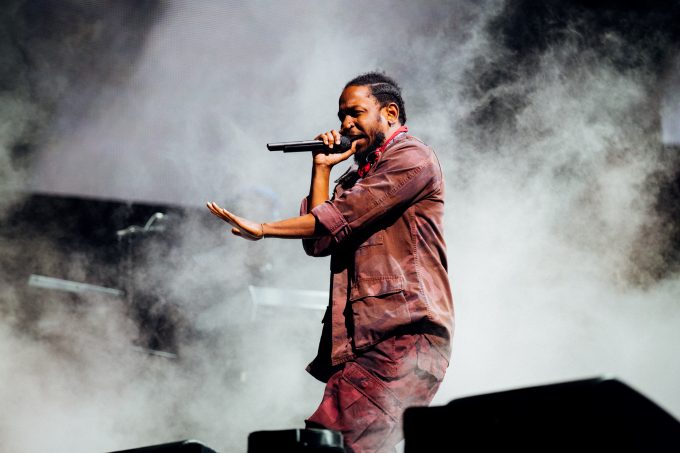 The wait was worth it. LCD Soundsystem, in an exciting return to their hometown, executed a fantastic set beginning with “Us v Them” and “Daft Punk Is Playing at My House” in quick succession. While no new material played in the career-covering two hour performance, James Murphy and the backing band delivered on his promise early in the set to play as many songs as possible and keep on-stage banter to a minimum. He surprised the audience with a cover of “Bye Bye Bayou” in tribute to the songwriter and Suicide frontman Alan Vega who passed away during the previous week. 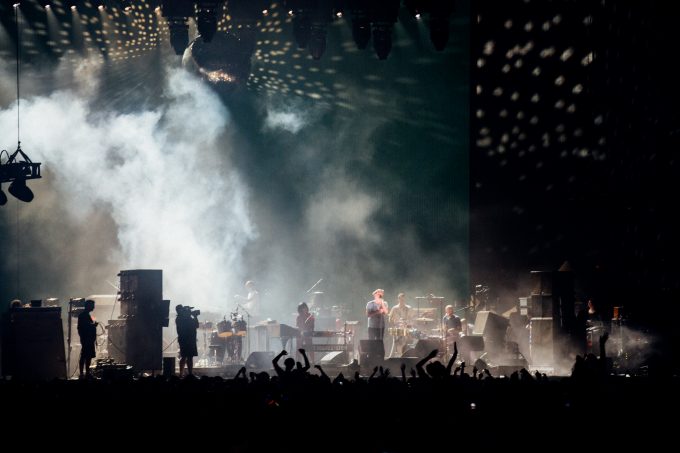 The first band to play the main stage of Panorama delivered a captivating and emotional performance. Entering over a sample of ever-timely commentary by Malcolm X, the Atlanta-based experimental group immediately showed their versatility and energy with “Black Eunuch” and seamlessly jumped between gospel rock grooves and noisy, heavy jams throughout their set Friday afternoon. Add them immediately to your bands-to-watch list. 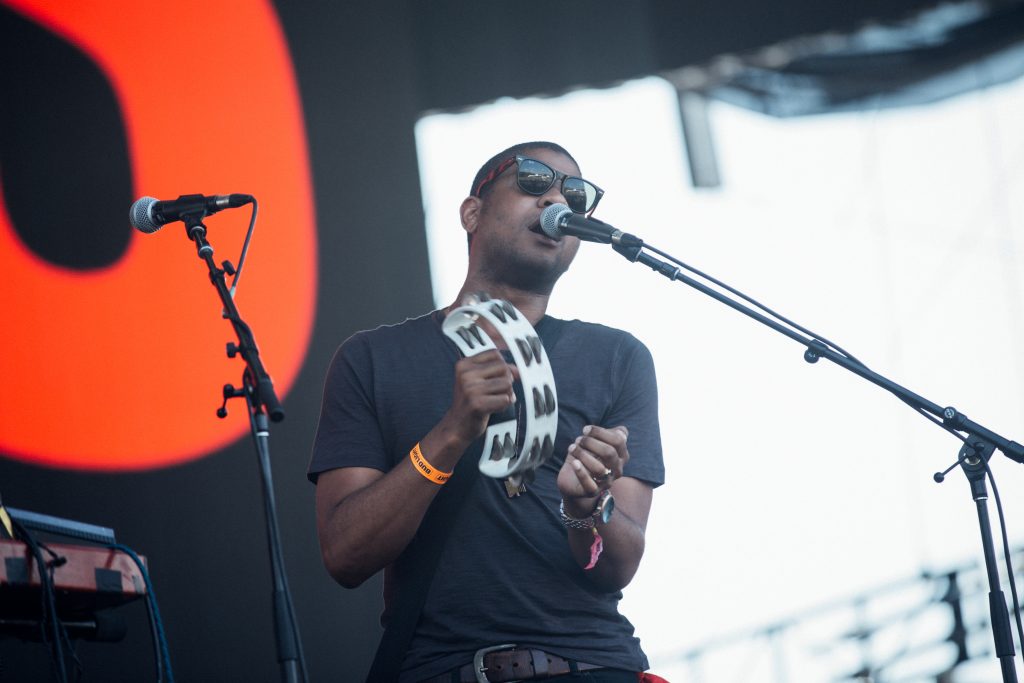 Opening with an ambient intro, FKA Twigs started the most visually dazzling set of Friday’s roster. Entering the stage in exquisite costume, she finished a supremely sensual routine with a male dancer over the instrumental and launched into “Water Me.” Her delicate vocal delivery weaved seamlessly through the complex dance choregraphy of each song. Next to Sufjan Stevens, the most imaginative and haunting production of the weekend. 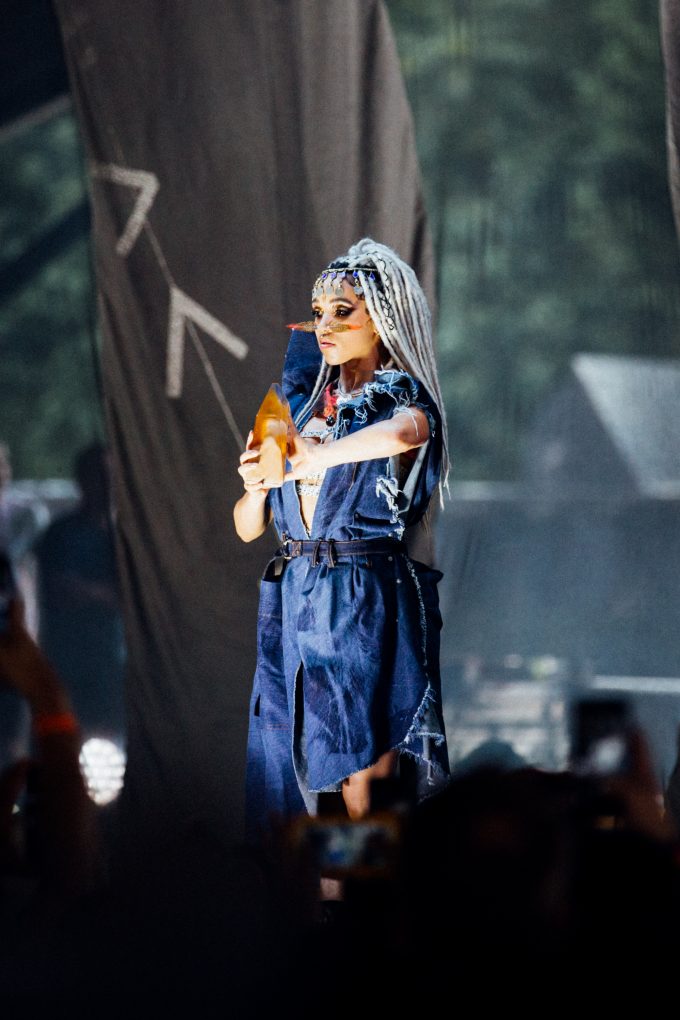 “We’re Broken Social Scene,” frontman Kevin Drew shouted, “and we believe in every one of you.” A well-deserved accolade for the crowd, which stretched far past the borders of the Pavillion stage and roared to life over the iconic guitar riff of “KC Accidental.” If the crowd, mostly young millennials, lacked any familiarity with this mainstay of early 2000s indie rock, it certainly didn’t show. Amy Millan of the band Stars joined the already substantial backing band (which included their usual run of horns, keys, and sometimes, a trio of electric guitars) to keep energy at a peak throughout the discography-spanning set Friday evening. Although Broken Social Scene lacked the visual spectacle of the other play-the-hits band on Friday night, they compensated for it in nostalgia and captivating instrumentation. 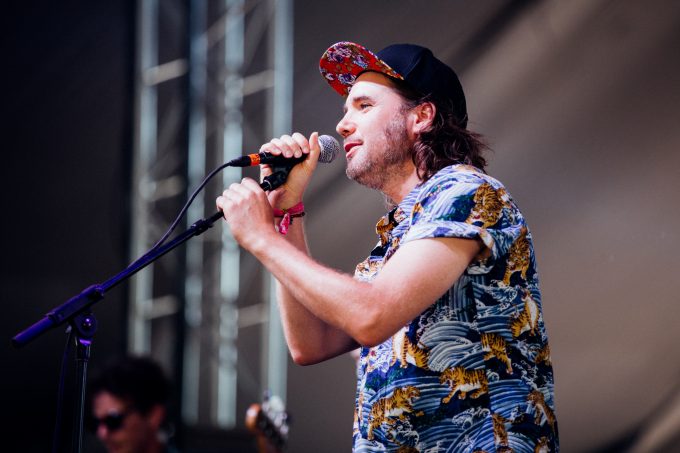 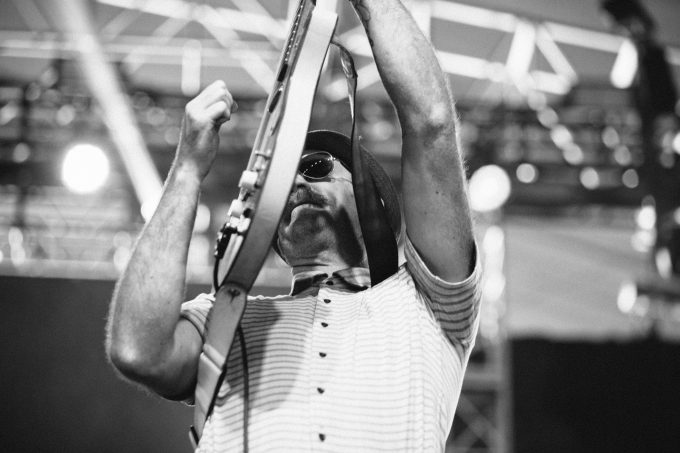 Easily the best party set of Friday evening (sorry, Major Lazer). Like A$AP Rocky who would follow on Sunday night, Schoolboy Q rolled out in dramatic reds to a crowd screaming out every verse of the 2012 hit “Hands on the Wheel.” He effortlessly worked the audience through multiple cuts off the acclaimed LP appeared through the set, including “THat Part,” which felt whole and intense even without the album version’s features. 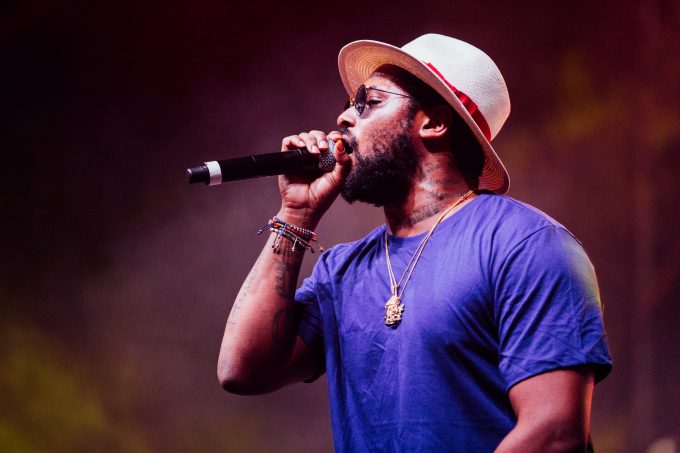 Although Arcade Fire didn’t present any new songs as many fans hoped, the band delivered flawless renditions of the group’s greatest hits and a few enjoyable political diversions. Midway through the performance, frontman Win Butler gave into one brief rant about Donald Trump that, as expected, was well-received by the New York music festival crowd. “Donald Trump will never be the fucking President. There’s not a fucking chance” he sighed. He also related an anecdote of keyboardist Régine Chassagne as a testament to dedication; her father immigrated to Canada and fought in the Vietnam war “with a Haitian passport.” The band maintained their status as first-rate live performers but apart from the cover of David Bowie’s “Rebel Rebel” there weren’t any real surprises in the set. 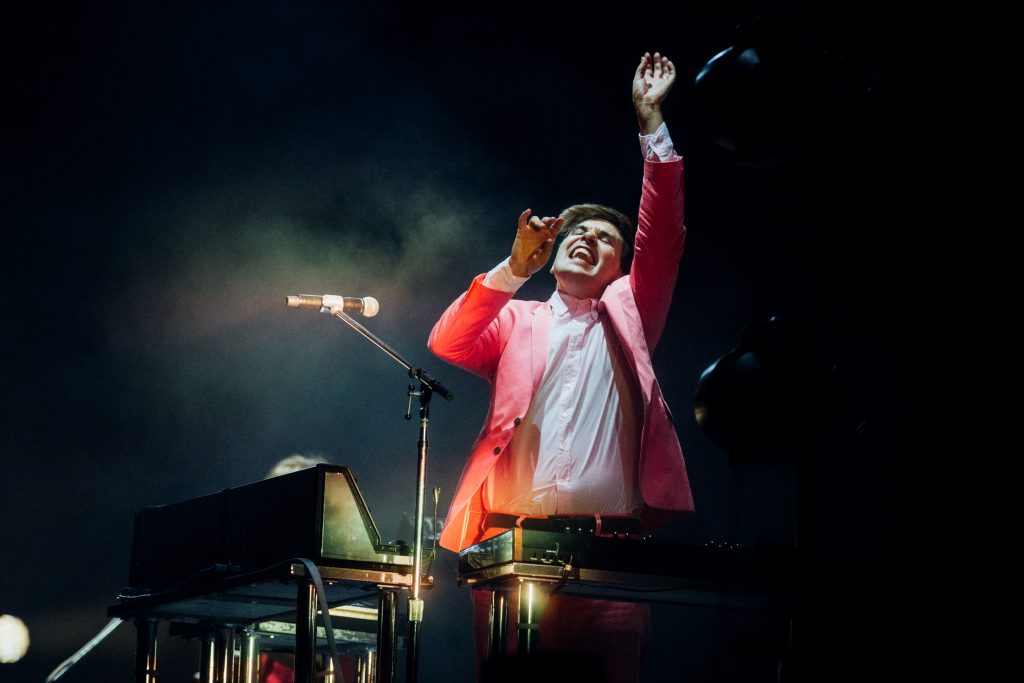