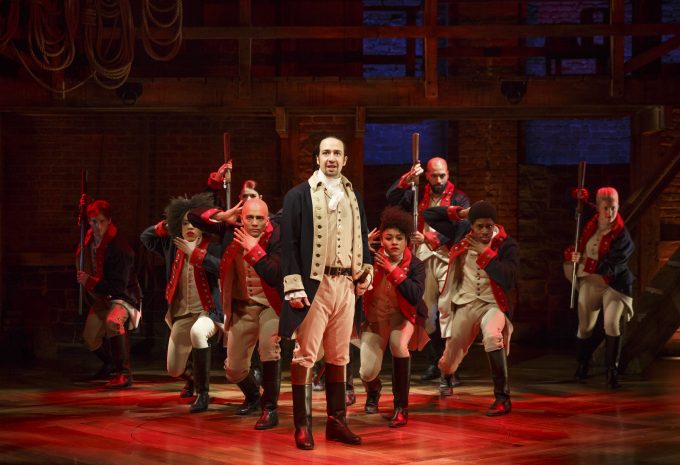 Lin-Manuel Miranda and the cast of Hamilton at The Public Theater. Photo courtesy of Joan Marcus.

It’s been a while since our last giveaway, so we’re going big with this one. Inspired by Ron Chernow’s book Alexander Hamilton and directed by Thomas Kail with choreography by Andy Blankenbuehler and book, music, lyrics by mastermind and star Lin-Manuel Miranda, Hamilton: An American Musical is nothing short of a cultural phenomenon. The production won 11 Tony Awards last year, but critical accolades aside, the musical is beloved for its unapologetic portrayal of humanity. This fresh take on the life of Alexander Hamilton, particularly his rejection of old traditions and forays into the US’s first sex scandal, is disarmingly modern and uncomfortably relevant. Hamilton sold-out a six month run in San Francisco — the debut city of its first US tour — within 24 hours, but not before we managed to snag two tickets to give away to one lucky winner!

To win a pair of tickets to see Hamilton on Tuesday, April 25, 2017 at SHN Orpheum Theater in San Francisco, follow the directions below. The more options you complete the better chance you have to take the tickets home! For you non-tweeters, we’re also running the contest on Instagram, where you can follow a few more steps to increase your odds of winning.

NOTE: Contest will run until 12am on Thursday, April 20, 2017. The winner will be picked at random and announced later the same day. We will overnight hard copies of the tickets to the winner.

Take Eventseeker on the go! Download the Eventseeker app for iPhone, Windows, or Android and be the first to know the latest updates from your favorite bands, sports teams, comedians & more.