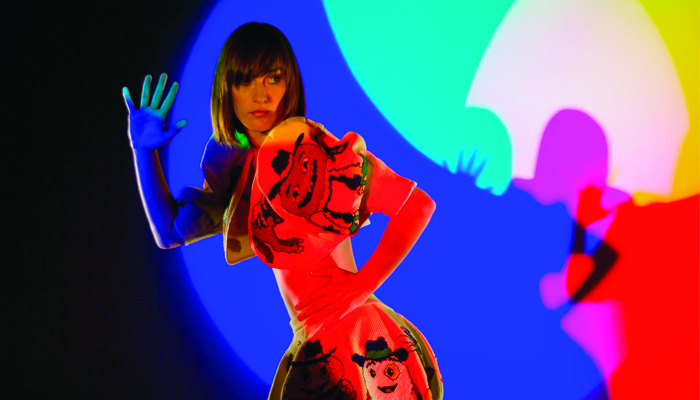 The trio is led by Yelle herself. Off stage, she is known as Julie Budet and she and her bandmates hail from France. Their sound is a booming mix of French-electro and pop. The band first gained a following by posting a couple songs on their MySpace account, which in turn got attention of labels and critics as well.

I had first of Yelle through some friends because one them wanted to celebrate her birthday by seeing Yelle perform at the Mezzanine in San Francisco on Halloween night in 2008. Dressed up in our costumes and ready to party, we danced all night long. In effect, we ended up living up to the words on the t-shirts they were selling at the merch-table: “Dance or Die”.

Fast forward to April of this year at Coachella in Indio, CA, and for some of my friends it was another chance to finally see Yelle again, or for the first time for the rest of our crew. A lot of pop music takes its cue from specific music genres, and while most pop music is just a recycling of itself, Yelle is a healthy combination of flash and substance. That has not changed from what I remember from 2008, and what I saw in the Indio desert.

Along with Yelle is GrandMarnier on drums and Tepr on keyboards, and as already stated, their infectious energy was just too much to contain on stage, and again, we found ourselves working up a sweat on the dance floor. Yelle is still riding high off their recently released sophomore album, Safari Disco Club, which follows up Pop Up, their 2007 debut. The first single, also titled “Safari Disco Club” is floor-filler tight with of course the customary big-booming drums and synth. Honest to goodness, even if you don’t understand a lick of French just as I, it won’t stop you from enjoying Yelle.

What was of particular great news earlier this year was that announcement that Yelle would open up for Katy Perry and the UK portion of the latter’s 2011 touring schedule. My initial thought was that it would allow a wider audience to discover the awesomeness that is Yelle. Those 14-dates that Yelle was attached to had just recently wrapped up, so time will tell if that definitely happens or not. Coming up on the immediate horizon for Yelle is a slew of small shows and festivals in Europe and Australia which include particular stops at Sonar Festival, Splendour in the Grass and Pukkelpop.

Let us know your thoughts! We’d love to hear from you. Follow us on Twitter and like us on Facebook to give us a shout. You can also stay on top of exciting events from around the world by downloading the eventseeker app for iPhone, Android or Windows