Entering the Stern Grove Festival grounds is pretty exhilarating. Leaving behind the hassles and noise of the city and meandering through a large archway into a dense and lush forest, it is an enchanted place to host a live funk and soul show. As concert goers from all walks of life (young, old, some with babies strapped to them or children following behind) enter the amphitheater-style grounds, it immediately becomes a hunt to find the best possible view point. Getting to the grove early is a must if you want to snag a lawn spot close to the stage, but for most, it’s up in the Redwood rafters that you claim your own nook among the trees. Dirt paths and wood blocks lead cooler-hauling and blanket-hugging people to a variety of different levels up a large embankment in the park. Hours before the show, people settle in, drink, read, play music and nap while half listening to various bands run sound check and fool around on the mic. 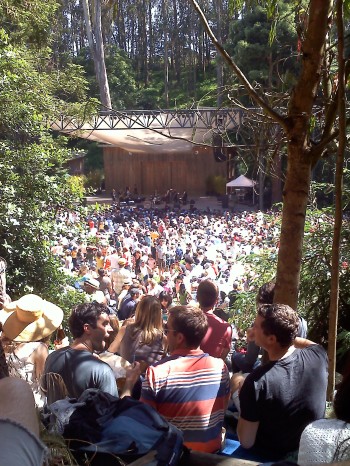 By show time at 2pm, 10,000 attendees had filled the trees, finding any and all places (some rather creative) to hunker down. The French chanteur and relatively unknown Motown artist, Ben L’Oncle Soul opens the 2011 Festival season. Wearing a black bow tie, sweater vest, button-down shirt, khaki shorts and knee high white socks (think Carlton of Fresh Prince of Bel-Air), Benjamin Duterde’s (real name) school-boy preppy-chic fashion underscored his playful and exuberant personality. From the first few notes, the self-assured sound of the band propelled Duterde and his backup dancers through gleeful and energetic performances. With choreographed routines to each and every song, regardless of tempo, the backup crew lit up the stage with exaggerated and perfectly synchronized moves reminiscent of the Temptations and soul groups of the 50’s and 60’s. Duterde’s music and vocal styling immediately brings to mind John Legend and influences of Stevie Wonder. “Soul Man” sounds like it was recorded in 1964 and sung by Otis Redding or Stevie himself. From start to finish, their set was pure fun, creating an infectious energy throughout the park and drawing many people off their blankets and onto their feet.

Sharon Jones‘ large house band, The Dap Kings (the funk and soul collective that has contributed to the popular sounds of artists like Amy Winehouse and Mark Ronson) kicked off their set by introducing the backup singers, The Dapettes and giving each a chance to belt out a few of their own tunes to the large and eager crowd. This is also a testament to Sharon Jones. She is a true diva, with a larger than life persona, and yet is still generously promoting others around her. I have never been to a headliners show and seen any female singer (including Eryka Badu, Adele, Jill Scott, or India Arie) give up the stage so freely and selflessly. With that said, once Ms. Jones hit the stage, decked in a glamorous black and silver sequined dress and stilettos, you knew who the star was. She danced and belted out soul jams from one end of the stage to the other, repeatedly kicking off her heels and giving the audience dance tutorials on everything from the boogaloo to the mashed potato, leaving nothing behind other than sweat and maybe a few sequins. She is the epitome of funk and soul and is reviving the spirit and attitude of the sixties with every album and every tireless tour.

The day felt like one big celebration of throw-back sound and sixties swagger. Although, the two stand-out moments for me were covers that both acts did; Ben L’Oncle Soul with “Seven Nation Army” (White Stripes) and Sharon Jones with “This is a Man’s World” (James Brown) which brought the house (or shall I say, forest down). As people cleaned up their site and tirelessly trekked back down to solid ground, you couldn’t escape the sound of murmured plans already being devised for the next installment of this summer-long and oh ya, did I mention FREE festival. Up next, is the Bay Area’s own hip-hop collective Jazz Mafia Symphony with special guests Jurassic 5 and Ozomatli MC, Chali 2na this Sunday, June 26th.