Back in March of this year, I bought a three-day pass to Lollapalooza, which is finally about to happen later this week. Upon seeing Lollapalooza’s lineup for the first time, my heart leapt a beat in excitement when I saw that Friendly Fires would be playing on the festival’s second day. I have been yearning to see this band perform live for quite some time.

Thankfully however, there didn’t appear to be any schedule conflicts. That is until I did my due diligence and listened to some of the bands that I’m not already familiar with. When I started listening to Skylar Grey’s music, I liked what I heard. Unfortunately, I did not like what I saw when I realized her set overlaps with Friendly Fires’ set for all but 15 minutes. When attending a music festival, schedule conflicts like that are the bane of my existence.

With a little fortunate coincidence on my side, a few weeks ago I found out that Grey was playing a show here in San Francisco at the Rickshaw Stop on July 28th. As it turned out, this was Skylar Grey’s first performance as Skylar Grey. Grey is the stage name for Holly Brook Hafermann. 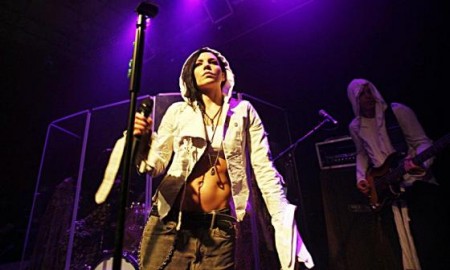 I got to the Rickshaw a little after 11pm. The room was already hot, steamy and ready for Grey and her backing band to take the stage. Standing at the back of the dance floor near the bar, I was able to see four people dressed in white hoodies covering their heads: one behind the drum kit, one wielding a guitar, one playing the bass and one, who I correctly presumed was Grey, standing on something that elevated her a bit above the stage. With the mic in her hand and her back to the audience, they started the show with “Building a Monster.”

Her voice was just as melodic and heartfelt live as it was heard booming from out of my headphones or speakers at home. In between songs, Grey showed her appreciation for her audience, and said a little something or two about each of the songs she was about to perform, which are off of her first full LP, Invisible, due out in the fall. Save for a quick chorus line from Radiohead’s “Creep” that led into her track “Weirdo,” I was unfamiliar with most of her set. At another point, while she finished up “Can’t Haunt Me,” a track she did with Marilyn Manson that features a zombie and goth motif, she started belting out the chorus to the Cranberries’ “Zombie” with the audience singing along in unison. In both cases, I felt it was a nice touch and threw in an element of surprise, especially since I’m sure I wasn’t the only one who didn’t know too much about Grey’s solo material. 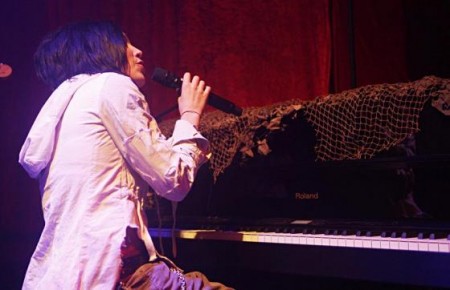 Most of Grey’s songs that I did know going into the show last week were her collaborations with Diddy Dirty Money, Lupe Fiasco, and Eminem and Dr. Dre. In fact, that’s how Grey finished the show: performing a medley on the piano of her portions to “Coming Home“, “Words I Never Said“, “I Need A Doctor“, and then finishing it all off with “Love the Way You Lie.”

Overall, it was a fun and satisfying night, and I can probably go to Lollapalooza feeling like I’ve eliminated the schedule conflict between Grey and Friendly Fires. But Grey and her band have a few more gigs before the festival to sound even tighter on stage. Knowing this, and also that Grey may well have some more special surprises in store for her set at Lollapalooza, I could very well be right back where I started. Go figure.