By ALEXA DOOSEMAN
As the biggest comedy festival in San Francisco, SF Sketchfest is an exciting time for Bay Area comedy-lovers. For about two weeks, the country’s best comedians descend upon the city and present stand-up, sketch, improv and alternative comedy. Unfortunately, due to an overly hectic summer schedule, I was only able to catch one performance at The Purple Onion: Never Not Funny Live with Jimmy Pardo, Matt Belknap and Pat Francis.

I know – quite the name. 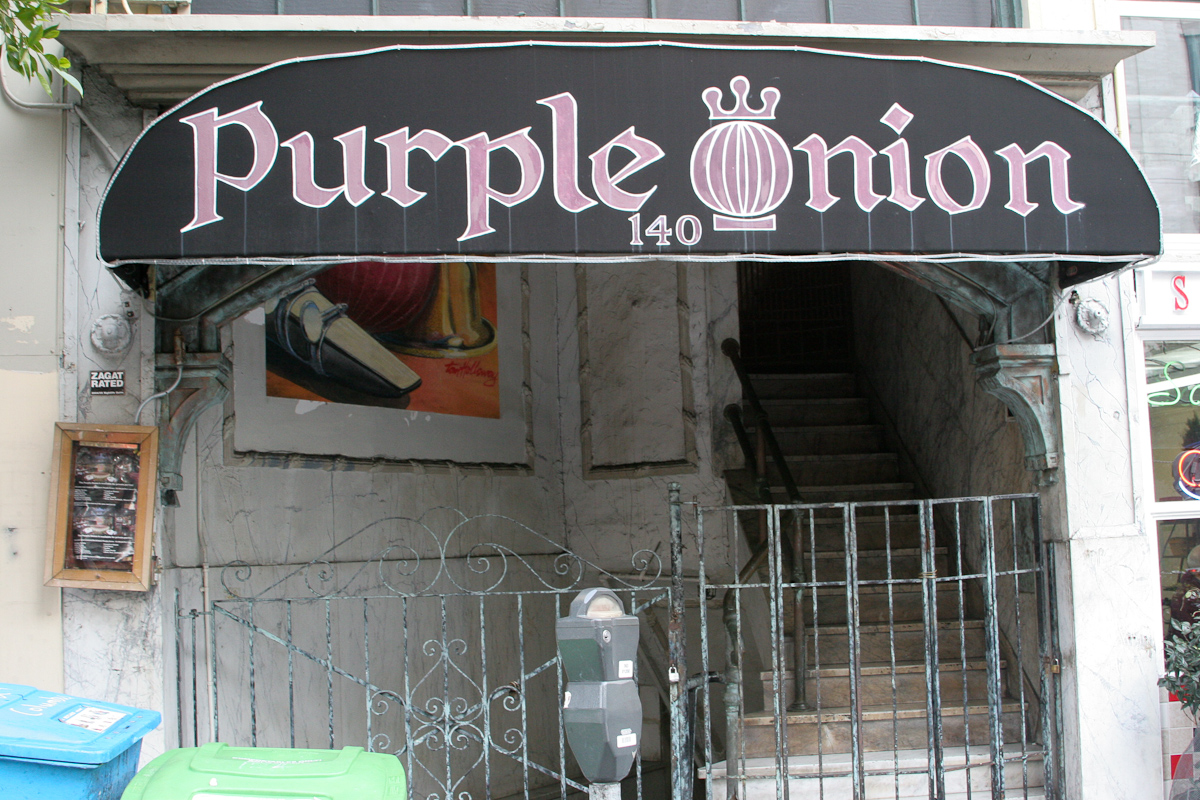 Broken down, the show was a live taping of Never Not Funny, Jimmy Pardo‘s weekly podcast. For those who don’t know it, Never Not Funny is an open conversation between Pardo, his producer, Matt Belknap, and an alternating third guest. They discuss pop culture, their personal lives, day-to-day events, and really just anything that comes up. Because they are three comedians, it is usually a very funny conversation. For a podcast, it’s an enlightened idea: let funny people just be funny. However, as a live show, it didn’t completely translate.

First of all, the venue, The Purple Onion, is an intimate cellar in North Beach. Everyone is close – very close – to the stage, and since the tiny stage was holding three men and recording equipment, it was cramped. This is to be expected in smaller comedy clubs. However, because the format of the show was watching three friends talk, I had the odd sensation that I was eavesdropping. Of course, I wasn’t. But, without a classic “act” or “set” to create distance between these men as comedians and these men as men, I felt uncomfortably close to them.

As for the comedians themselves, they all share the rare talent of being naturally funny. Pardo has energy to burn, which was immediately apparent in his nine-minute, off-the-cuff, opening monologue. Belknap’s presence, meanwhile, was understated, but his humor equally as cutting. The guest, Pat Francis, provided a joie-de-vivre attitude, walking on stage with a glass of wine and throwing out random topics to discuss. Pardo did an excellent job managing these different personalities, including his own, leading the conversation in lively, sharp and witty directions. But again, since it was a conversation, every lull, every laugh that went on a bit too long, every bumpy segue (which they were eager to point out themselves) was noticed by the audience. Whereas, if you hear those moments in your headphones, you don’t see the comedians’ brief glances at each other, the looks that say, “Who is going to say something next?”

The moment that received the night’s biggest laugh bolsters my point. Francis has become known for writing funny eBay letters, either to sellers or in response to buyers. He brought one of these letters, a reply to a buyer’s questions about the Superman DVD collection Francis was selling, to read out loud. As he unfolded the paper, you could feel the audience prepare for a punchline – and that was exactly what they got. The first line that Francis belts out, in all its irony and hilariousness, is: “WHAT’S UP, NERD?” From that line onward, he had the audience in the palm of his hand. I think that was because we, as an audience, were ready for the joke. It wasn’t part of the conversation. Instead, we recognized it as a set-piece, and, in its familiarity, we ate it up.

Shows like this are exactly what make Sketchfest a fun festival. It’s an opportunity to see different types of comedy and to re-think the comedy that you are most familiar with. In the case of Never Not Funny, it gave me a chance to watch comedians banter and play off of each other. And even though this, of course, was a performance in itself, I enjoyed seeing the space between improv and stand-up, the space where funny personalities hang out and try things out. It was as unique – and, at moments, uncomfortable – as any conversation has the potential to be.