By GILLIAN HAMEL
Before last Tuesday, I wasn’t really sure what or where the San Francisco Film Society was. Being a UC Berkeley alum, I sort of assumed it was like the Pacific Film Archive—an educationally geared art house cinema with a staggering repository of films from around the world, ranging from classic rarities to the latest in obscure, avant-garde art films. And, since it was San Francisco, it would probably be tucked away in a weird, slightly made-up neighborhood that hasn’t quite been swept up in hipsterized gentrification yet.

And I was almost right. As it turns out, the San Francisco Film Society is much more than an archive—rather, they’re an active, dynamic cultural organization that is pertinently steeped in the contemporary. According to their website, SFFS “encourages the progressive evolution of film culture and individual lives by celebrating the transformative power of the moving image in all its forms.” Essentially, SFFS provides funding to independent filmmakers all over the world, offers classes and workshops in both the theory and craft of film (with an emphasis on special youth programs in conjunction with California public school curricula), and of course provides reasonably priced screenings of new and recent independent films from all over the world in their incredibly stylish, high-tech, ultra-modern new cinema. Which, for some reason, is in Japantown. 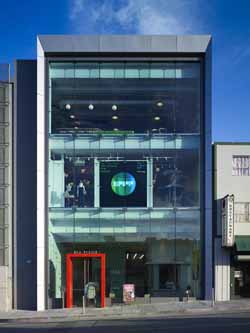 As it turns out, the Japantown location is awesome. The cinema is located on the bottom floor of New People, an incredibly stylish, high-tech, ultra-modern art gallery/shopping center/café/all-around cool stuff building, on Post Street near Webster. Right as you walk in, you’re greeted by a petite, charming café (usually staffed by a petite, charming barista) serving such local delights as Blue Bottle coffee, Delica bento boxes, Pepple’s Vegan Donuts, Fat Bottom Cupcakes, and other things that are not so great for your wallet or waistline but go fantastically with your taste buds. Upstairs, there are several cutting-edge Japanese fashion boutiques (which were closed when my friends and I arrived for the 9:20 showing, which was probably a good thing). On the third floor, you’ll find the SUPERFROG Gallery, an art space specifically geared toward artists inspired by Japanese pop culture, which I can’t wait to check out another time.

But lest I get distracted by raving about the gorgeous New People Cinema (which I rather was at first—it’s probably the most beautiful cinema I’ve been in, and I’ve been to such 1920s art house jewels as the Castro Theatre and the Grand Lake Theater in Oakland)—my friends and I were there to see Film Socialisme, the most recent venture from French New Wave legend Jean-Luc Godard. And we certainly did see it. 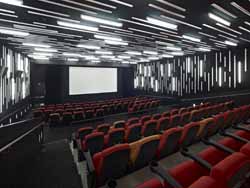 I’m mostly familiar with Godard’s films from the 60s (Breathless, Band of Outsiders, etc.) so I really wasn’t prepared for what he’s been up to lately. Put simply (simplistically, reductively, inadequately), Film Socialisme is a three-part meditation on history, revolution, and the current state of Western civilization. Just thinking about breaking that down makes me feel as dizzy and overwhelmed as I did when I left the theater.

To describe it in terms of form or structure, Film Socialisme is basically a Babel-like glut of language, sound, text and imagery—which is precisely the point and is celebrated aggressively in its presentation. The film is mostly in French, with occasional German, Russian, Hebrew, Arabic, etc. I have a very conversational grasp of French, which actually turned out to be a bit of a distraction. The subtitles are very occasional and given in what’s been generally described in the press as “Navajo English”—the incredibly stereotyped broken, noun-based speech of Native Americans as portrayed in Westerns and much of American pop culture before the term “politically correct” was invented. Given the topics discussed in the film, the subtitles came across to me as more of a grammarless distillation of the film’s concepts. It is left to the viewer to determine their context and meaning to the film and to him/herself. The struggle to figure out what’s “going on” or what the film’s “about” is a huge crux for Film Socialisme, and can leave the casual viewer feeling alienated and deliberately left out. For example, throughout the film there’s a continuous and deliberate storyline/allegory focusing on the legend of the Moscow gold, but this was barely apparent to me or my non-polyglot friends—and it seems that’s kind of the point. The film is obscure because history is often obscure, muddied by rumor and hearsay, lost in translation. What endures is the image.

Once you stop trying to hear and understand six languages at once, and just look at what’s on the screen, it becomes much more apparent what this film is trying to do. Right away, you notice the prevalence of the camera—and not in a cute, clever “fourth wall” kind of way. The actual physical presence of cameras is in almost every scene, from the tourists taking photographs on the cruise ship in the first section, to the two women documenting a politically motivated, hyper-literate family running a garage in rural Switzerland in the entire second act. Vision, perception and documentation are ceaselessly attended to, and even assaulted; the final segment, which is presented as a survey of six historical sites of Europe and the Middle East, is heavily intercut with historical stock footage and scenes from other films, including the particularly salient repetition of the mass murder scene on the Odessa steps from The Battleship Potemkin, so that the viewer almost loses track of what’s being presented as history/documentary and what’s being presented as fiction. However, the intended result of this combination of sensory overload and interpretive deprivation goes beyond utter confusion; it’s the sense that our sociopolitical history and present are simultaneous, endlessly refractive, and ultimately driven and sustained by the images we make of them.

Even if you don’t understand one of the many languages spoken in the film, or if the “Navajo English” subtitles don’t help, one thing is clear about Film Socialisme: history and culture are the product of the individual, not vice versa. In the context of this film, it almost doesn’t matter what you read, hear or see unless you record and repeat it yourself. History is at its core a recurrence of images, and Film Socialisme celebrates it in all its chaotic glory.