I had the bar set high for the this show–so high that on my way to the venue, I began worrying that all the hype I created would be the downfall of it all. Sometimes, I’m really happy when I’m wrong.

The scene was set when Other Lives took the stage. The sun had just disappeared, leaving an orange and pink glow around the stage that would eventually fade into the dark backdrop of the sky. I was ready for the band’s meditative sounds to slowly transition my day into night, but Other Lives had other plans. The band set the night on fire with a steady flow of instrumental music that was much more intense live than it was in recordings. Its layered sound was magnified by the performance of the drummer and percussionist, who gave their drums and cymbals a thorough beating throughout the show. Front-man Jesse Tabish had his guitar slung around his back as he bounced back and forth between his keyboard and cymbal, nearly breaking his drumstick in the process. Of course, driven by textured harmonies, the songs always took on pensive overtones that still kept the ambiance of the Greek Theatre contemplative. The life that Tabish and his band pumped into their music was a pleasant surprise. 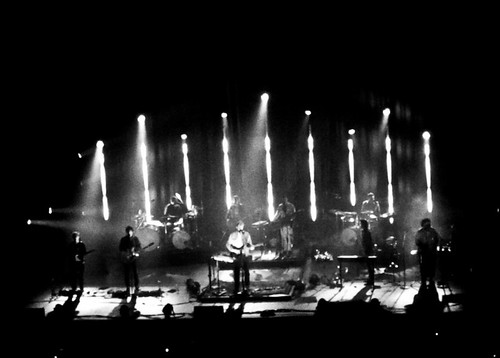 Bon Iver gave us exactly what we wanted. Justin Vernon’s whispered sentiments were beautifully raw and his live vocals gave me ten times more chills than his recordings ever did. Every twangy folk section of music was eventually overrun by a choir of voices. The harmonies were sometimes built slowly, and sometimes built so quickly that before I could process the beginning of the song, the band was already belting an extended three-piece harmony that dwarfed any of its instrumentals–except the skin-melting electric guitar that came out of left field. There were moments during the show that embodied rock n’ roll. He shredded an electric guitar harder than I would have ever given him credit for, had I not seen it myself. Vernon’s hushed sound and thoughtfully poetic lyrics epitomized the singer/songwriter’s simplistic approach to music. The chunks of crashing guitar riffs, brass instruments, and bursts of personality from Bon Iver’s members only further illuminated the band’s signature minimalistic sound. 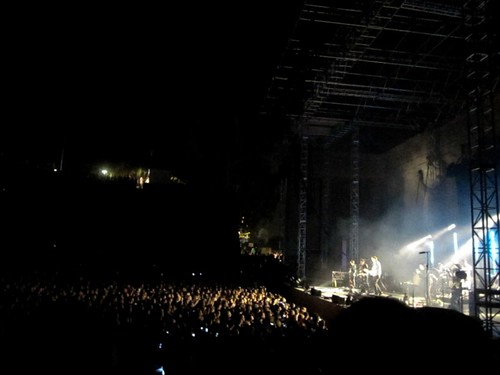 For the first part of Bon Iver’s encore, Vernon came onstage holding an acoustic guitar and sat down under a single spotlight as his band formed a semi-circle around him. The crowd’s whispering voices suddenly became wild once they knew they would get a bit more time with the band. Vernon began playing “Skinny Love” while his band-mates clapped and stomped to the syncopated beat in a touching and playful rendition of my favorite Bon Iver song. The melodies in this song have a tragic life to them, so Vernon announced that he wanted to end things on a positive note and began playing “For Emma.” In this last song, it was the brass section’s time to shine. The tenor sax, trumpet and trombone players, under streams of light and fog, played like they were on the streets of Louisiana in the early 1900s.

The most memorable part of the show was the genuine display of gratitude from both bands. Tabish said the crowd at the Greek was the biggest audience his band had ever played for. Vernon–a man just shy enough to still be accessible and very, very likable– looked around at the crowd at multiple points throughout his set, truly humbled by everyone’s energy and excitement. Although he accidentally thanked “San Francisco” for always offering a warm reception, the crowd at the Berkeley Greek Theatre seemed to let it slide and cheered for the positive vibes that Vernon felt for the Bay Area. It’s nice to know that a musician whose fame is rising exponentially knows that the small connections made between musicians and fans are what make the experience of live music endearing and worth the money. I’d love to see both Other Lives and Bon Iver again, perhaps next time in a smaller venue where the chance of having a personal exchange is even higher. 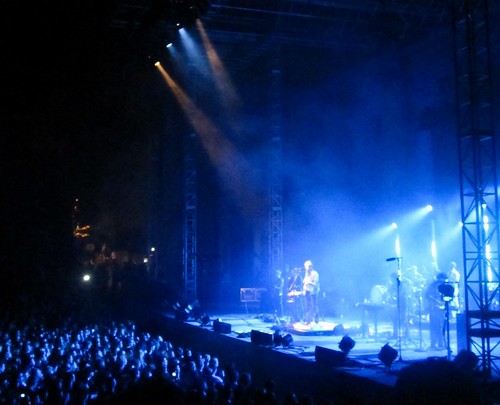 What did you think of the Bon Iver and Other Lives show at the Greek? If you want to see where they’ll be playing next, start tracking them on eventseekr.com. Let us know what you think! Follow us on Twitter and like us on Facebook to give us a shout. You can also stay on top of exciting events from around the world by downloading the eventseeker app for iPhone, Android or Windows.