Frite Nite is a dance music label based in San Francisco that is helmed by producer Paul Salva. On Saturday October 22nd its crew celebrated the release of Ana Sia’s mix CD Surreal Estate with a party at the Mezzanine. The organizers stressed that a formal attire was strongly encouraged, and the male DJs that I saw indeed wore sharp suits. As for the audience, the prospect of dressing formally appealed mostly to the ladies, as most of the guys were wearing regular T-shirts. What my husband and I were wearing illustrated that point perfectly.

To anyone who still doubts the voraciousness of the contemporary bass music scene, the Frite Nite event should have proven a potent counterpoint. The party was fairly eclectic, cohering stuff like funky psychedelia (B. Bravo and the Starship Connection), hard-hitting beats (DjG) and echoes of dancehall and early-nineties rave (Chrissy Murderbot, whom I missed–shucks) into a trendy whole. Some of the music I heard was unmemorable but OK to dance to, some was more gratifying. 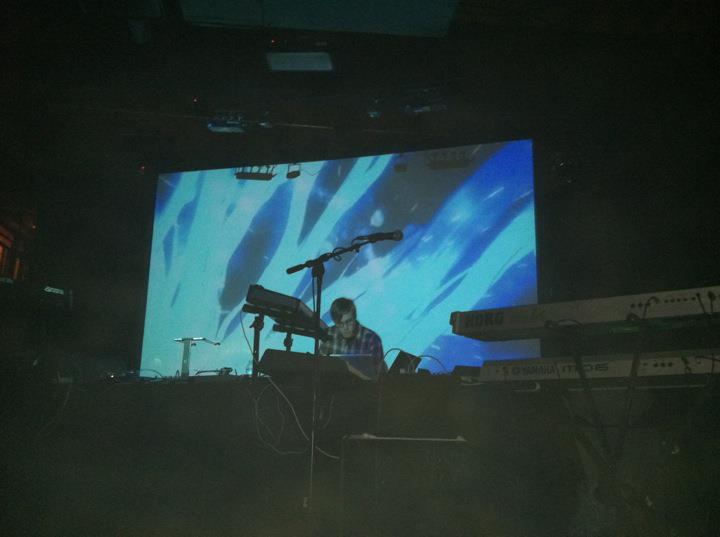 Our Frite Nite experience started with Comma (pictured above), who spun a glitchy and a very Low End Theory set. My geeky husband, who loves learning unusual genre names and inventing his own, called his stuff “acid crunk.” Next were B. Bravo and the Starship Connection, who provided a dose of bubbly synth funk (with vocodered vocals). Right at the very moment when I thought, “Here we go, music for seducing ladies,” the vocalist yelled “All the ladies in the house, make some noise!” Uh-huh.

The highlights were sets by Salva and DjG. The former, despite his inability to DJ live due to technical problems, still satisfied with a no-bullshit, elastic and bouncy set. But bouncing to DjG’s tunes proved to be an even bigger pleasure. I read that he first became known as a dubstep producer, but the wub-wub-wub was nowhere to be found. Instead, frenetic steely rhythms prevailed, informed by jungle but with a touch of sensuality. That night it was the most perfect music to entrust my body to. Listen to DjG’s track “Rites,” featured on Ana Sia’s mix.

Speaking of Ana Sia, the “trendy whole” mentioned in the beginning of this post might be the most apt description for her set, composed of tracks which navigate freely between dubstep, house, and whatnot. The Surreal Estate compilation also proved to be a worthwhile buy. You can stream it here.

Did you go to Frite Nite as well?