In the tradition of bringing you the 6-6-6 on the best haunted locations and ghost tours in the United States, here is the 6-6-6 on haunted lighthouses in North America. Lighthouses have long been a powerful symbol of solitude, perseverance and stoicism, and have served as homes for brave men and women who light the lanterns to guide ships from rocky shores and shallow waters. Considering the many tragic events tied to many lighthouses in the United States and Canada, The 6-6-6 on Haunted Lighthouses is sure to give you a chill.

All prices quoted are for the 2011 season and for adult entry.

Top 6 Haunted Lighthouses on the Atlantic 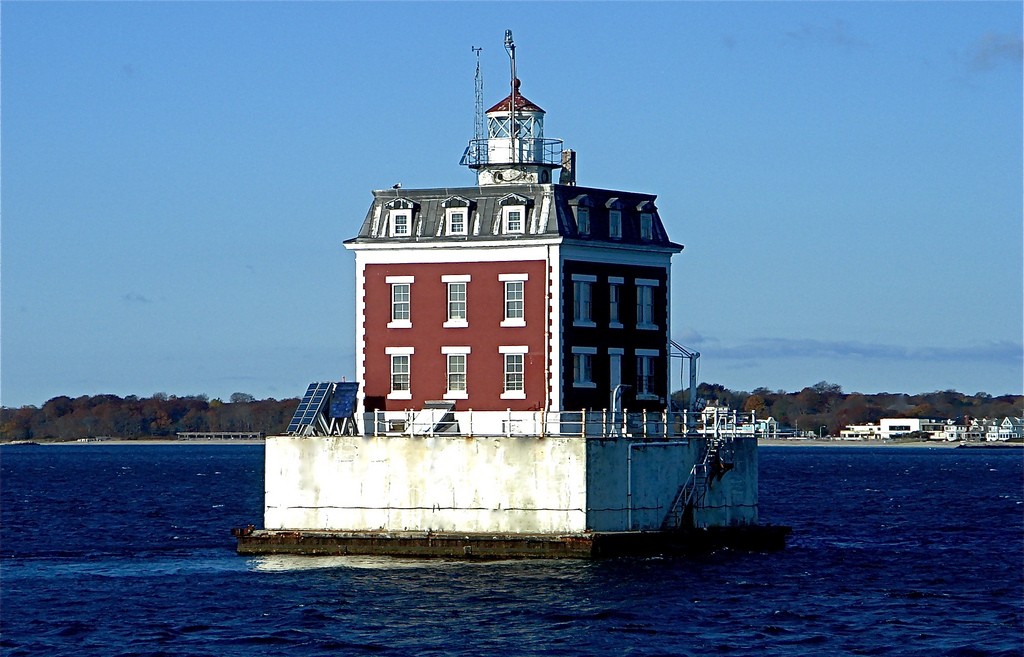 No doubt you have seen New London’s famous lighthouse on any number of ghost hunting TV shows. It is certainly one of the most haunted lighthouses in New England, home to the ghost of a former keeper or a construction worker named Ernie. Completed in 1909, New London Ledge Light was fully manned until 1987 when it was finally automated. The lighthouse is currently not open to the public due to an unsafe stairwell; however, it is visible thanks to boat tours of Long Island Sound.

The famous lighthouse at Cape Hatteras is the pride and joy of the Outer Banks. It is one of the most photographed and visited lighthouses in the country. In 1999, it was moved from its original location to a new spot down the road that has a more secure, reinforced concrete foundation. Seeing as this sliver of land protrudes right out into the Atlantic, it definitely makes the lighthouse susceptible to hurricanes. It’s the hurricanes that bring out this region’s Gray Man–a gentleman who warns residents of impending tropical storms and hurricanes. While not as well-known as the Gray Man of Pawleys Island, South Carolina, the Gray Man of Hatteras loves to make his presence known, but we’re not sure if anyone saw him before August 2011’s Hurricane Irene. The lighthouse is open from mid-April until Columbus Day weekend when you can climb the 248 stairs to the top for $7.

This lovely black-and-white-striped lighthouse was built in 1874. There are several different ghosts who apparently haunt this location, including the two young daughters of Hezekia Pittee who drowned near the property and one of the former lighthouse keepers, Peter Rasmussen or Joseph Andreu, who both loved cigars. Tourists who visit today claim to smell cigar smoke even though there is no one present who is smoking. Did I mention the pirates who died nearby and are buried somewhere behind the lighthouse? Lucky and/or brave visitors can opt to do a nighttime, Dark Side of the Moon tour (and climb!) of the lighthouse and the keeper’s quarters for just $25.

The port of entry into New York City from Long Island Sound was so perilous that a lighthouse was commissioned in the middle of the harbor. It was unfortunately placed on a location where British soldiers used to tie prisoners to the rocky shore at low tide and let them drown when the tide came in. Many say that the ghosts of those executed on this island still remain, wandering the rocks at all hours. The lighthouse is not open to the public as it is property of the United States Coast Guard, but it is visible on several tours that go out into the harbor. 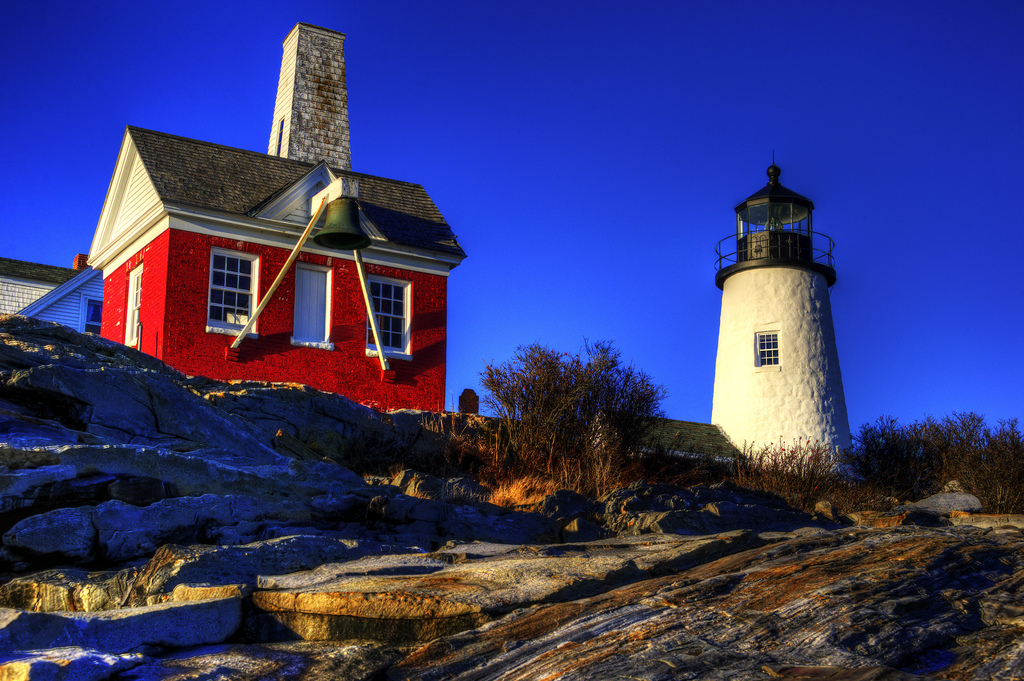 Pemaquid Point Light is not just “that lighthouse on the Maine quarter” or “that lighthouse on that Windows 7 USA theme,” but is also one of the prettiest and creepiest lighthouses in all of Maine. In a state known for lighthouses, Pemaquid is one of the oldest (1835) and most unique with a lovely bell tower adjacent to the lighthouse. Next to the light, there is a keeper’s house which is purportedly haunted by the spirit of a red-headed woman with a shawl who appears by the fireplace. Visitors can enter the park for $2 per person, but the lighthouse tower is not open to the public.

Situated at the entrance of Sippican Harbor (just before Buzzards Bay and the entrance to Cape Cod), Bird Island Light was built in 1819 and remained in use until 1933. After 64 years of being light-less, the light was relit in 1997. This old lighthouse is supposedly haunted by the spirit of Sarah, the wife of the first keeper, who was denied her beloved tobacco by her husband William. Locals on the mainland knew of this and liked smuggling her favorite goods to her, but nonetheless, tuberculosis got the best of her and she died under mysterious circumstances. While the lighthouse is not accessible to the public, visitors can visit the island from September to April.

In 1825, a lighthouse was constructed at Fairpoint Harbor, right on the banks of Lake Erie, but years later, it was deemed unsafe and a new one needed to be built. The current incarnation of the lighthouse was in operation from 1871 to 1925, and was later turned into a popular museum on the Great Lakes in 1945 by the Fairpoint Harbor Historical Society. Stories surrounding this home report the presence of two former keepers who were very attached to the lighthouse. The most beloved story, though, revolves around the apparition of a grey cat which has been spotted in the keeper’s house. During renovations in the early 2000s, the mummified remains of a cat were found in the crawlspace. The museum and tower are open Wednesdays, weekends and holidays from Memorial Day weekend through the middle of September for $4. Tours are available May through November. 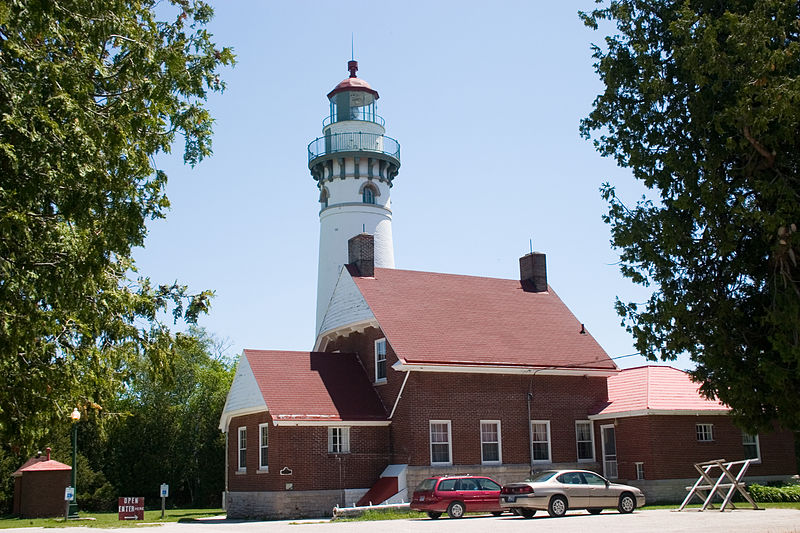 Located in the Upper Peninsula on the shores of Lake Michigan, the Seul Choix Light was manned from 1895 until 1972 when it was automated. It still functions as an active lighthouse today. The most well-known spirit attached to the property is that of a former keeper, Joseph Townshend, who died in the bedroom of the home next to the tower. Visitors today report seeing, hearing and smelling phantom cigar smoke from a man who clearly doesn’t want to leave. The lighthouse is open for visits from Memorial Day weekend through mid-October. 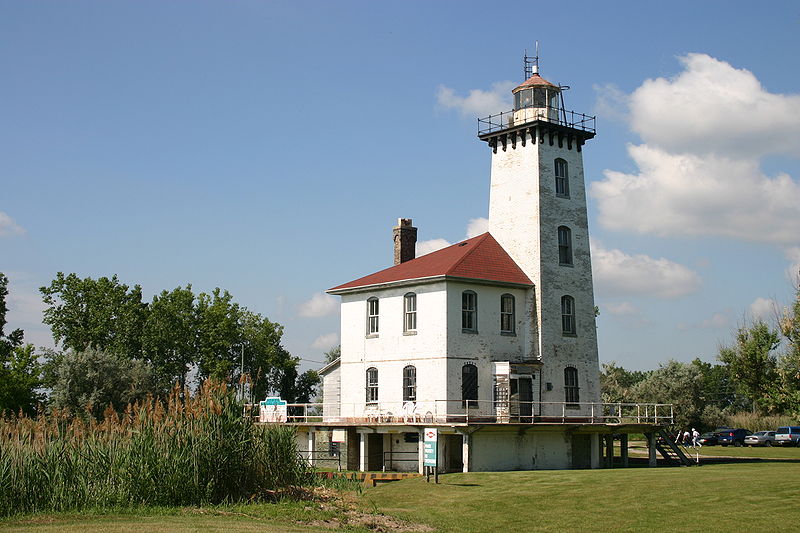 This lovely 19th-century lighthouse sits on the Saginaw River and was automated in 1960. Those who have been lucky (or brave) enough to visit the lighthouse have heard footsteps of very loyal former keepers and/or their spouses. Since 1940, the lighthouse has been located on private property owned by the Dow Chemical Company and is currently undergoing renovations; however, it is still visible by boat on the river.

Situated on the northwestern tip of Chambers Island in Gibraltar Township Park, Chambers Island Light is a key lighthouse on the entrance into Green Bay. With the growth of industry on the Great Lakes in the 19th Century, a light to guide the massive ships became necessary. The lighthouse was supposedly haunted by one of the former keepers who enjoyed playing pranks on one of the caretakers in the 1970s. This lasted until a group of nuns heard of the haunting back in 1987 and performed a kind of exorcism on the building. Since then, there have been no reports of ghostly activity, but you never know! The lighthouse can be visited by arrangement in the summer when the caretaker is on the property–otherwise boat is the best means of seeing it. 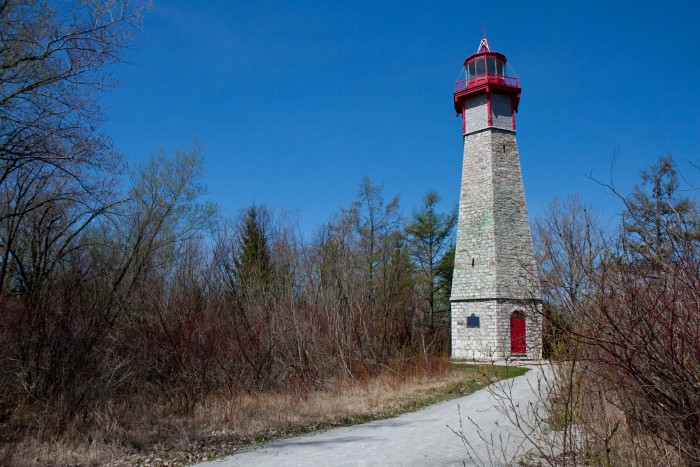 Photo by veggiefrog, CC BY 2.0

As the oldest lighthouse on the Great Lakes, the Gibraltar Point Lighthouse was built in 1808 and still stands today; however, it is no longer in operation. The spirit that haunts this early 19th-century lighthouse is supposedly the first keeper and bootleger, J.P. Radan Muller, who was murdered on-site in 1815. Radan Muller was said to have been hacked to pieces when he refused to sell alcohol to soldiers from nearby Fort York–the soldiers scattered his remains around the property. There have been reports of mysterious shadows, lights and sounds at this Toronto landmark. While you cannot go inside the lighthouse, you can take a ferry to Centre Island and either walk or bike the mile to the lighthouse.

Top 6 Haunted Lighthouses on the Pacific

One of two lovely (and haunted) lighthouses in Yaquina Bay, the Yaquina Bay Light was built in 1871 and is unique in that the light is built atop a home rather than on its own light tower. The structure was only used as a lighthouse for three years as another one was constructed nearby at Yaquina Head a couple years later. One of the spirits reported at this lighthouse is that of a sea captain who went ashore and never returned. A few years after this ghost was spotted, a female spirit also was seen on the property–supposedly that of a young girl who got lost and whose body was never recovered. 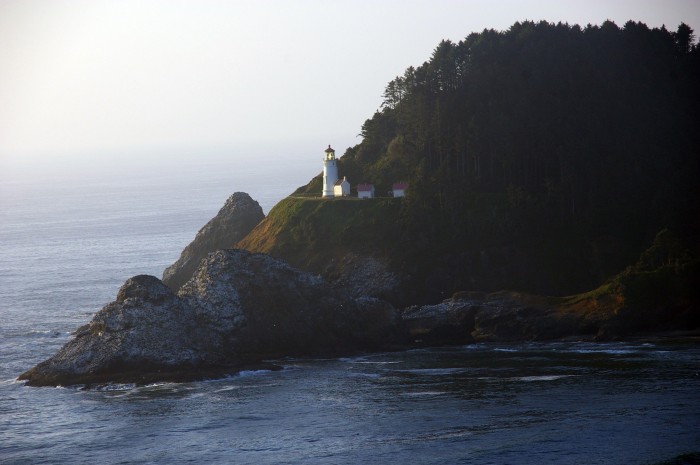 Haunted by the ghost named Rue (“The Lady in Grey”), this lighthouse is located at Heceta Head Lighthouse State Scenic Viewpoint, just miles from Oregon’s famed sea lion caves. Local lore claims that Rue’s daughter tragically died at a young age. Unable to overcome this tragedy, Rue committed suicide. Since the 1950s, strange reports have come in from keepers and guests about a mysterious Lady in Grey who haunts the attics and the grounds. Today, you can stay over in the caretaker’s quarters, which has been converted into a quaint bed and breakfast, complete with lighthouse cats. The lighthouse is open to the public for tours from April to October and there is a $5 fee per vehicle.

Crescent City has taken quite the beating from Mother Nature in the past 60 years with several earthquakes and tsunamis arriving at its door. The lighthouse at Battery Point is home to at least three spirits who are perhaps victims of these disasters. Nonetheless, these are playful ghosts who enjoying playing tricks on keepers and visitors by gently touching them or making loud noises. Battery Point Light is located on a small island, only accessible during low tide when the land bridge is open. It is open to the public from April to September, Wednesday through Sunday.

The tallest lighthouse on Puget Sound, the Point Wilson Light is located in Fort Worden State Park, approximately 40 miles north of Seattle. While the name of the female specter who haunts this lighthouse is unknown, she is definitely not shy about letting her presence be known. Most of the hauntings occur in the nearby lighthouse keeper’s quarters. Some suspect she is Maria Hastings Littlefield, a lightkeeper’s wife whose son drowned, or Lucy Washbourne, an unlucky traveler whose daughters perished in the 1921 shipwreck of the S.S. Governor. The lighthouse grounds are open for tours thanks to the Port Townsend Coast Guard Auxiliar; however, the lighthouse is not open to the public.

This little lighthouse was built to guide ships around the northern part of Los Angeles Harbor back in 1923. Many report seeing the apparition of a lady in white who wears a flowing gown, but efforts to discover the identity of this woman have not been successful. Some believe the apparition is a trick of the light, though there are still those who claim that it is the spirit of a wandering woman. The adjacent Point Vicente Interpretive Center is open to the public. Visitors can wander the grounds and perhaps do some Pacific gray whale watching to go along with their ghost hunting. 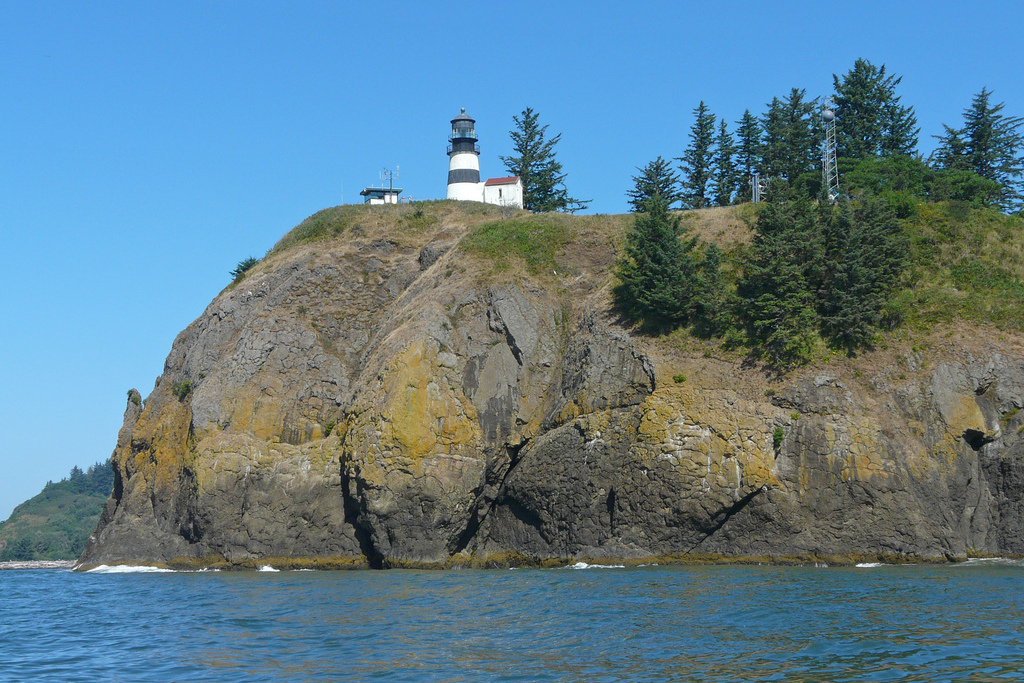 Have you ever been to a spooky lighthouse? Let us know what you think! Follow us on Twitter and like us on Facebook to give us a shout. You can also stay on top of exciting events from around the world by downloading the eventseeker app for iPhone, Android or Windows.