By ADAM SAWYER
I recently got the chance to set up a chat with the lead singer of the fun Australian rock quintet Little Red. The group boasts success in their home country with their first EP, Listen to Little Red, meeting good national reviews upon release in June 2008. It was named album of the week on Triple J. It was subsequently snatched up by UK label Lucky Number Records for its Northern Hemisphere debut. The latest album, Midnight Remember (Liberation Records, September 2010), has enjoyed a warm welcome over the past year as it went gold in the Outback. The ‘Red men are now touring their most recent musical fruition. Needless to say, I was rather excited to talk with Dominic Byrne, the lead singer and one of two guitarists. So I “gave him a bell” last Tuesday. The band was in New York for a couple CMJ performances where Paste Magazine named them one of the “10 Great Bands” at the festival. Well done, Aussies. 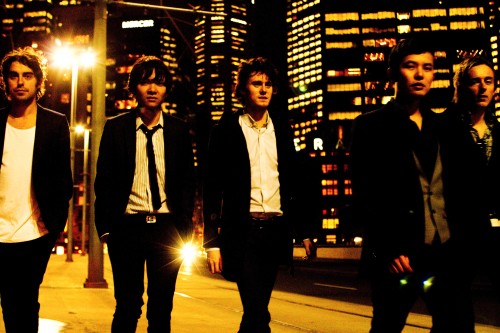 Dominic picks up his cell phone on the streets of the Big Apple and away we go.

You must’ve been having a really good time then.

You released your first EP independently. Did you have any backing for it?

I mean, we had our manager. I really don’t remember how we paid for it. We had a distributor, you know – (is distracted) Oh sh**, I thought I was standing next to a statue but it’s a cat. (Good laughs) Yeah, we had to sign because we’re not business men. I can’t organize anything beyond practice or something, you know.

We have lots of different tastes, but there are a lot of common things.

I really love Beach Boys. I’m really excited about Smile Sessions coming out. Umm.. even though I’ve got bootlegs of it and stuff. Beach Boys is a really special one for me. Bob Marley is another one. I was just telling a friend the other night – I don’t think anyone can hate on Bob Marley. Who can knock Marley? I mean, there’s no point. He’s the one musician who has – what do you call it – a philosophy. Something really tangible. He walks the talk. I’m sorry, I gotta just.. there’s a march. I’m actually near.. I think it might be Wall Street. It’s that place they’re protesting. It’s incredible. So amazing. The thing is, I just don’t understand who’s organizing it. In fact, I just heard somebody ask somebody else “Who’s the boss?” (I left Tony Danza out of this one) And he was like “there’s no boss.” There are lots of different agendas going on. You know, everyone gets in there. There are some Hare Krishnas pushing their sh**. There’s a guy who’s got this crack pipe hydrogen maker. You know, water into hydrogen thing. And he’s working it into the global financial crisis. Anyways, I’m rude to waste time. So the others, let’s see there’s Radiohead. It’s a very special band for me. Lots of other ones, Chili Peppers, Dylan, Leonard Cohen.. I dunno. I guess I should just email you my IPod music. 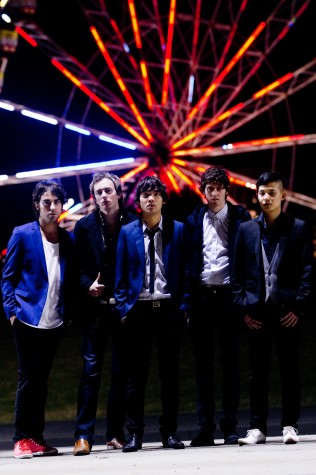 The five members have a somewhat traditional rock band back story, in that they all met in high school. With the exception of Taka who joined when Little Red changed drummer.

I like that idea. Would you say you all came into the band with relatively similar music backgrounds?

We all came in relatively similar. I studied piano when I was a little kid, but then changed to guitar and rock n’ roll when I was a teenager. It’s natural for that change to happen, I guess. Umm, and I think that’s the same for a lot of the other guys. I know Quang studied piano. Tom studied Viola and Adrian played the guitar from when he was about 11. I’ve known him since I was 5.

Have you guys played any crazy venues?

We’ll play anything at this point. We did do a Yo Gabba Gabba show. We were out partying the night before – to bed at 4am and up at 7am. We were all pretty much still drunk. We got an angry email about that one. It’s funny though because we’re not really a crazy or bad boy band.

Would you rather get the chance to play with Fleetwood Mac or The Mamas & the Papas (in their heyday, of course)?

What made you go that way?

I think it’s their harmonies. I’d love to see them sing those harmonies. That one chick was amazing, but then again so was Stevie Nicks.

He’s a sick guitarist, that guy. Playing with them would be incredible as well. Really it was 50/50 and I just had to give you an answer.

Are you all single?

No, I’m not. I’ve got a girlfriend. Quang and Tucker are single. The rest of us all have partners.

What would you say is your most fun song to perform live?

Well, “Rock It” was a real big hit for us in Australia. That’s one great song. I tell you, I really enjoy doing “All Mine.” When we do that it’s pretty f****** epic. Umm, and then some of the old stuff that’s more rock ‘n roll. From our first album. Most songs are fun. Some are kinda harder, like “Get A Life.” But it really makes a great show.

“Rock It” went platinum in Australia and was voted Best Song at The Age’s EG Awards.

ALL MINE – Little Red from CHARLIE PIGDOG on Vimeo.

Who would you say is your audience?

I wouldn’t want to restrict my audience because I actually think that it’s for everybody. I’m definitely making music for every single person. They don’t have to be cool or anything (laughs). You don’t have to be young, you don’t have to be old; it’s really for everyone. We do our song better live than when we actually record. And we do see a fair range of people. I know my mum doesn’t really like to go out – she’s getting a bit older so she’d feel a bit out of place. But I’d like everyone to feel very comfortable to come see us.

What do you all have in common other than the music?

Ummm. Ok. Well, everybody is a bit of a comedian. They’re all pretty funny dudes. And we all like drinking (I laugh, suspecting he will as well. No laugh)

Yeah I think that’s a lot of bands. It holds it all together. Or it’s the thing that tears it apart (he laughs, thankfully)

I wish him a great day and stay in good old NY before he runs off to wow the music festival crowds. Little Red is currently on a jaunt around Canada and the West Coast of the States. The journey will continue in Japan in April, the UK in May and Australia in June, then back to North America. You can check eventseekr for their performance dates. Will the US receive the group of gentlemen rock crooners as openly as the great Down Under? Check back for a review of the band’s November 5th concert date at Rickshaw Stop in San Francisco and find out.

Let us know your thoughts on Little Red. Let us know what you think! Follow us on Twitter and like us on Facebook to give us a shout. You can also stay on top of exciting events from around the world by downloading the eventseeker app for iPhone, Android or Windows.