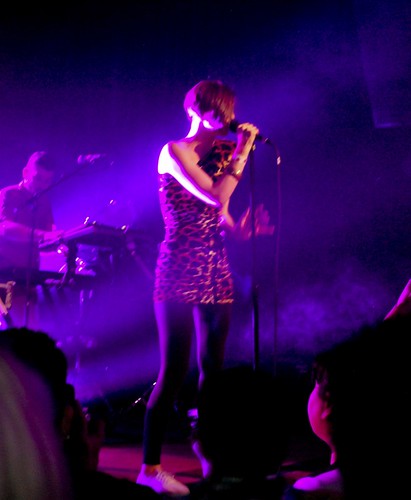 Some nights when going to a show, you just have this feeling in your stomach that lets you know that the entire night will be this epic, sprawling adventure. Approaching the entrance of the Mezzanine last Saturday night, you could feel the energy just by looking at the line of people still waiting to get inside with the music blaring out the front doors. I felt even more amped up when I entered the venue and saw the crowd of people already inside anxiously awaiting the dancey, electronic-pop sounds of Yelle. By the time my friends and I got inside, Dirty Ghosts was nearing the end of its set. Local to San Francisco, Dirty Ghosts had won a contest to open up for the French-headliners. Although we didn’t get to see much of its set, the band had clearly worked the room into a mood to dance and party.

The sold out show at Mezzanine was originally meant to be the second stop on this month-long tour for Yelle, but unfortunately, due to complications with visas, the tour opener at The Wiltern in Los Angeles had to be rescheduled until a few days after the San Francisco show. Thus, in the last 24-36 hours leading up to the show at Mezzanine, my friends and I were a bit nervous about the possibility of our show having to be postponed as well. 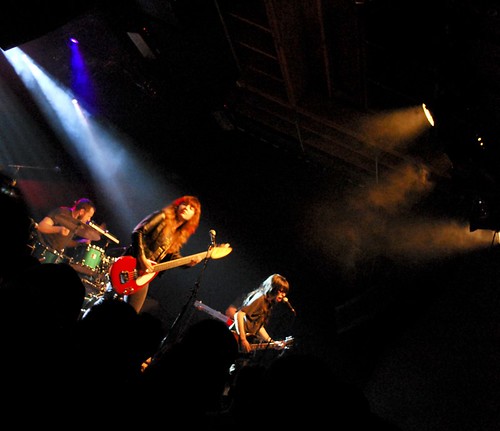 Maybe it was that nervousness coupled with the relief knowing that it was finally show time, but you could feel the electricity in the air as the roadies were setting up the last of the band’s gear before Yelle took the stage.

When the amps turned on, Tepr and GrandMarnier took to their instruments with their visors on, covering much of their faces. A few moments later, a lithe figure covered in a coat of feathers and shrubbery carefully walked to the front of the stage. The music started with a bolt of thunder, and the walls suddenly exploded and the roof was torn off. No, not in any kind of literal sense, but it certainly felt that way when the crowd erupted instantaneously as soon as the band started playing “S’éteint Le Soleil.” 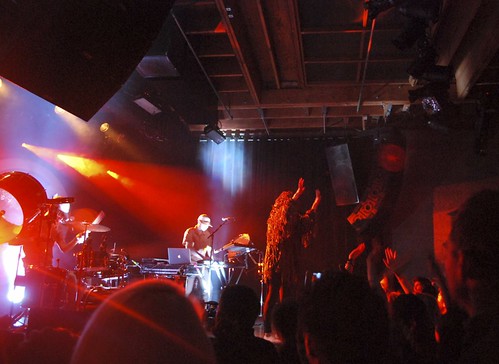 After having the chance to interview Yelle herself, Julie Budet, and talk about the band’s music, fashion and stage energy, it was really fun experiencing the show with a broadened perspective. At some point, Budet removed the coat of feathers and revealed herself to the crowd in a leopard print top and leggings. She later appeared wearing a dress with shoulder pads so over-sized it looked like she was wearing a bow.

Having also talked with Budet about the importance to all three band members of the song “Mon Pays,” it was a particular joy to hear the song played in the set. Naturally, the club got particularly bouncy when the band performed crowd favorites “Ce Jeu,” “Je Veux Te Voir” and “A Cause Des Garçons.” 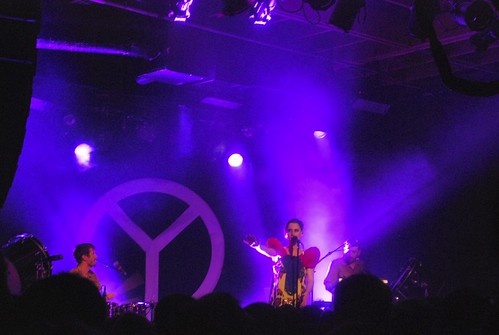 In fact, just like the previous two times I’ve seen Yelle, this entire night was filled with jump up and dance moments, but I got particularly giddy when the band performed “Cooler Couleur,” their collaboration with the Italian DJ-duo Crookers. Unlike the rest of Yelle’s catalog, which is all sung in French, this catchy collaboration with Crookers is sung at least partly in English.

At the end of the night, Budet did a nice gesture and came to the merch table to do a little meet and greet with fans. Also at the merch table, I made sure to buy a T-shirt that I had long been meaning to get my hands on–it’s a solid black t-shirt with giant red text that reads “Dance or Die.” Everyone in the building that night chose to dance, and dance all night long is exactly what everybody did. 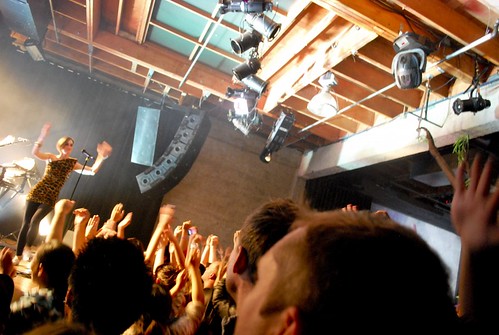 More of Joey P.’s photos from Yelle at Mezzanine