For its 28th season, Opera San Jose chose to do something very interesting. Instead of pairing Ruggero Leoncavallo’s Pagliacci with its usual partner, Pietro Mascagni’s Cavalleria Rusticana, the company chose to pair it with Francis Poulenc’s La Voix Humaine. Both are verismo(realism, or “truth”) operas, which means that they deal with regular people and their problems as opposed to issues that relate to gods or the nobility. 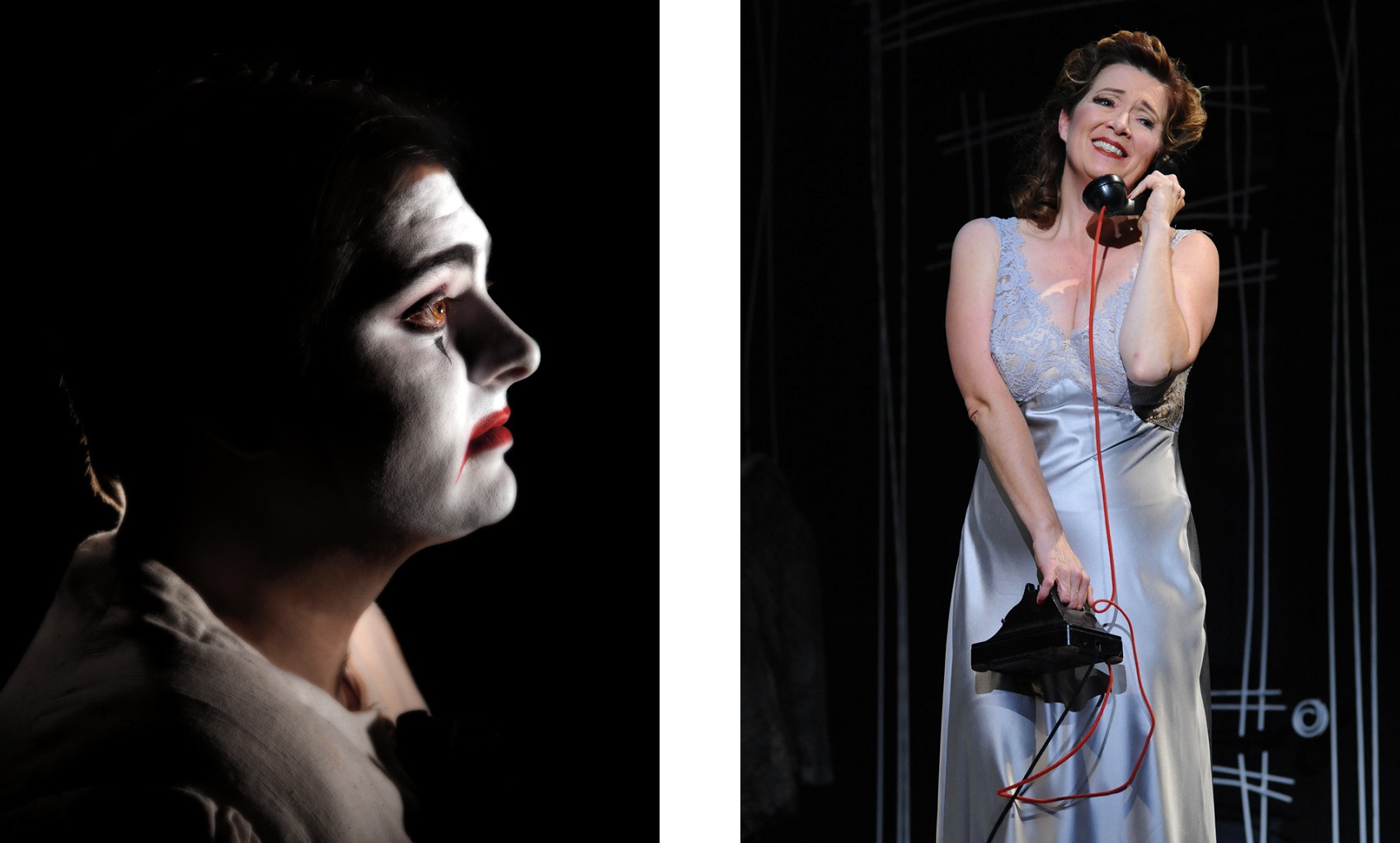 The setting for the two operas is completely different, although both can be said to deal with the issue of communication, or lack thereof. Overall, Opera San Jose did a glorious job with both of them; it was a rare instance when the set design, stage direction and artists all worked perfectly together, with each aspect adding tremendously to the performance. 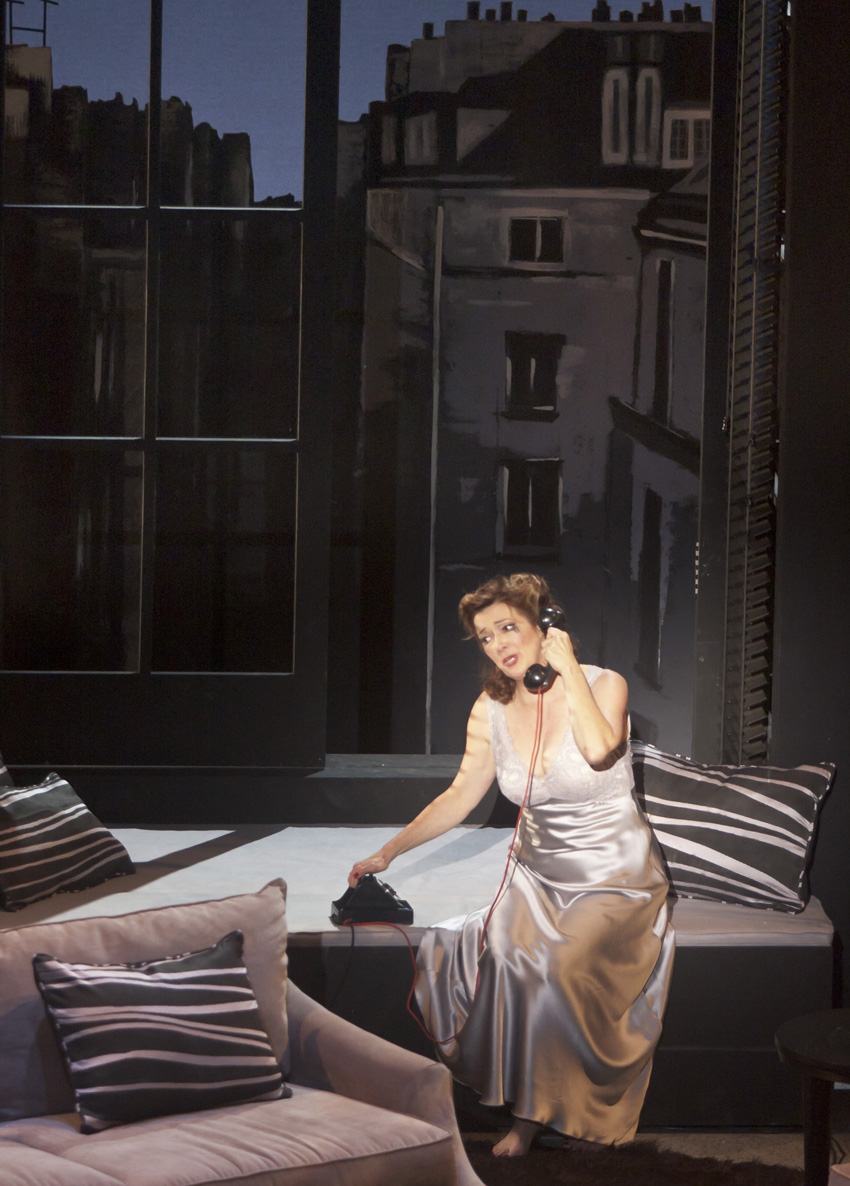 Directed by Layna Chianakas, La Voix Humaine (The Human Voice) opens the night with singer Suzan Hanson in the title role. It first premiered in 1959, and is based on a play by Jean Cocteau that was written in 1930. In this one-act opera, a woman, known only as elle (she) must come to terms with being discarded by her lover. La Voix Humaine is only 45 minutes long, and consists of the audience hearing her end of a phone conversation with her ex-lover. You find out that she tried to commit suicide the night before (her failed relationship doesn’t just mean she’s lost her lover of the last five years–in this era, it also means that she’s lost her income), and she is constantly agitated, sometimes screaming and crying, sometimes laughing. You can tell that she’s completely blinded and trapped by her love for this man, and is no longer quite able to function. Conductor Bryan Nies leads the orchestra in perpetuating that frenzied mood, mirroring her pain with swells of music that alternate with moments of silence.

The set, which was designed by J.B. Wilson creates a dizzying sense of unease, and makes the audience feel as though the room is constantly in flux and completely unstable; indeed, it reflects elle’s mental state for the whole night. As the opera progresses, you get the palpable sense that the set is made to look like a prison. She is trapped by her situation, and all of her attempts to communicate her pain through the telephone (the human voice) come to naught. A window seems to beckon from the back of the stage–it ultimately appears to be the only way out. For 45 minutes, you wonder: will she jump, or will she recover? La Voix Humaine is a powerful, thought-provoking piece of work, and Opera San Jose’s presentation of it is masterful. 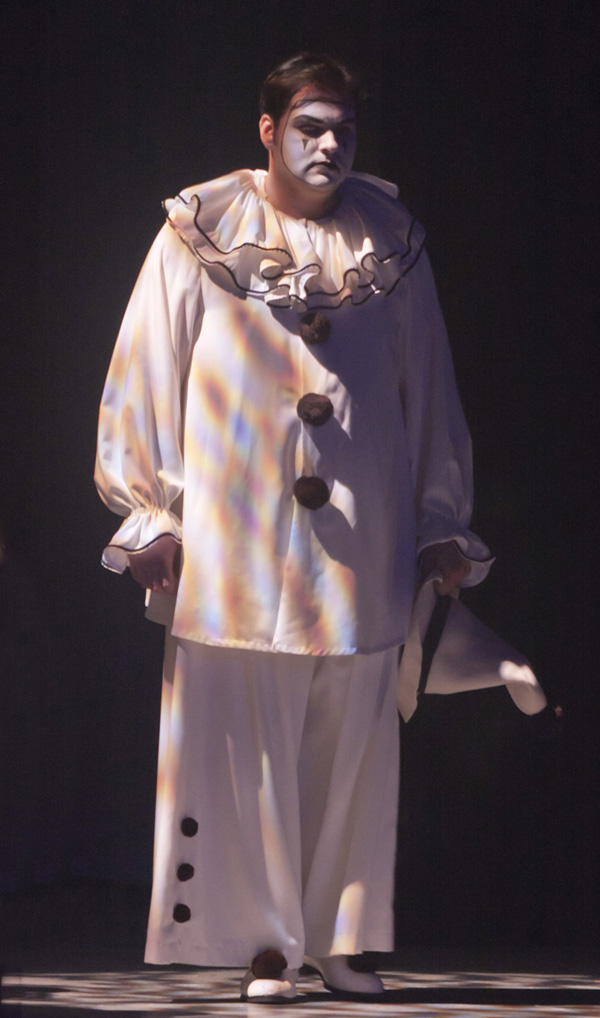 After the suspenseful, discordant tone of La Voix Humaine, the music in Pagliacci (Players or Clowns) restores a sense of ease to the theater. This opera made its debut in Milan in 1892, and is best known for the aria, “Vesti la Giubba,” (put on your costume) which has been performed by everyone from Luciano Pavoratti to Sideshow Bob from The Simpsons. The opera is structured as a play within a play in which life imitates art with disastrous consequences. The director, Cynthia Stokes, worked with Wilson to design a set that doesn’t refer to any specific place or time, since the story of Pagliacci is still relevant today. In it, Canio (Alexander Boyer) and his troupe of commedia-dell’arte performers put on a play about him being cuckolded by his wife–only for him to find out later that his wife, Nedda (Jouvanca Jean-Baptiste), is cheating on him in real life with Silvio (Krassen Karagiozov). Boyer’s rendition of “Vesti la Giubba” sends chills down your spine. Tonio, the diabolical, jealous man who is also in love with Nedda, is played to a devilish tee by Jason Detwiler. 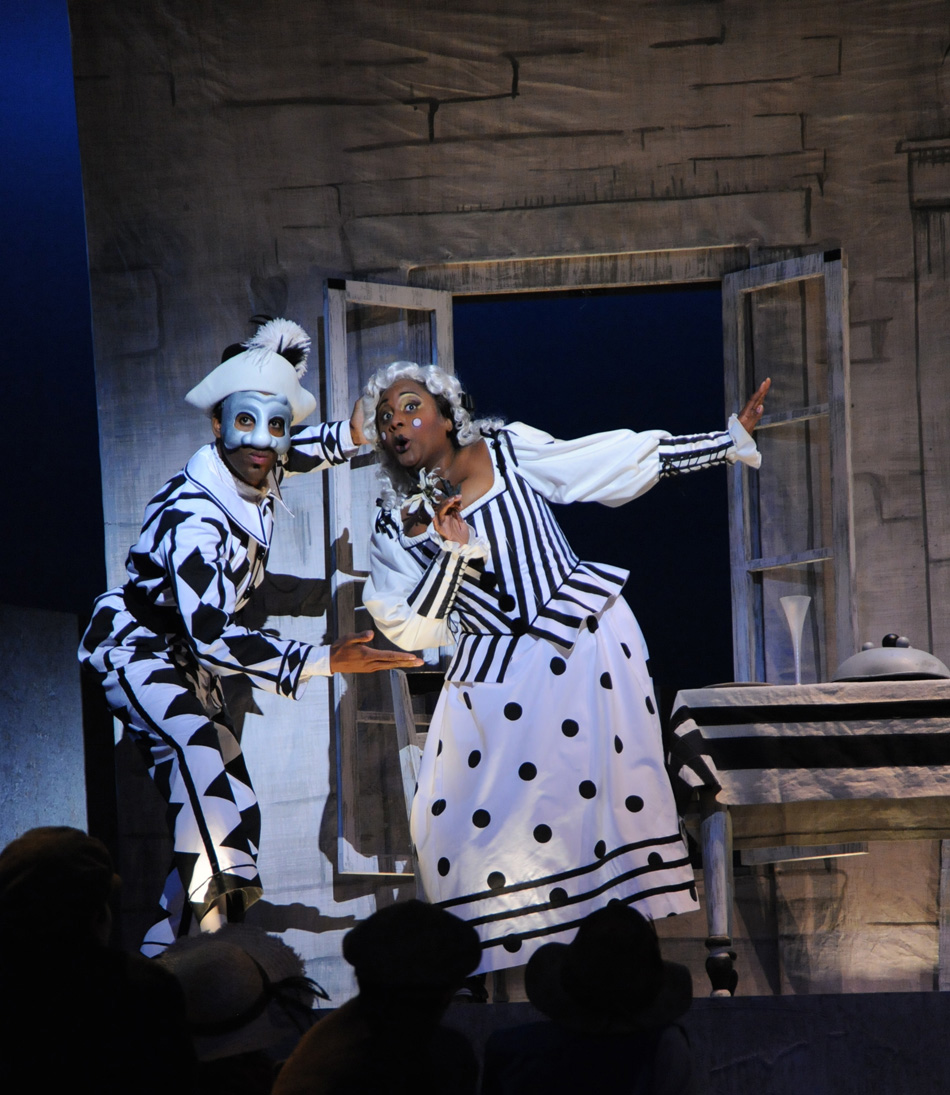 Jean-Baptiste definitely stole the show in the November 13 performance. Whenever she wanted to express something emphatically, she dropped out of her singing voice for a beat to express what she felt in a speaking tone. Even if it was just “No” or “Stop,” saying those words in a lower register made a huge difference in how believable she was. In her final showdown with Canio in the song, “No! Pagliaccio non son” (No! I am not a player/actor) she finally sings her refusal at full blast–and you become awed by her strength. It was purely an “Oh shit, this is real” moment. At that instant, I remembered the prologue to Pagliacci, in which Tonio comes out and tells the audience to take the performers’ emotions seriously. He tells the audience that the performers are human, and that their emotions are real. Pagliacci ended with Tonio standing on the stage above the crowd once again, staring into the audience, as if in reprimand: if you had taken us seriously, if you had understood what we were communicating to you, we wouldn’t have come to this tragic end.

After all of this, it shouldn’t come as a surprise that the crowd stood and gave the company a standing ovation. Though the cast varies depending on the night, the San Jose Opera’s portrayal of these two operas has great emotional impact. It is an experience that should not be missed.