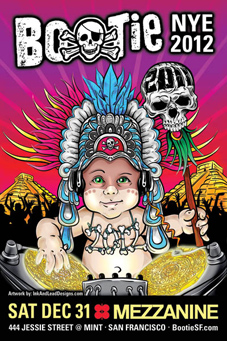 The Mezzanine is a club/venue that’s not too big, and not too small. It’s just the right size to be as accommodating as it is intimate–which is especially key for a night out on the town such as New Year’s Eve. If you’d rather just focus on dancing and partying yourself into 2012, but don’t necessarily feel like wanting to get overly dressed up like some other NYE parties, hurry up and make plans for Bootie NYE pronto. Only just a handful of tickets remain available.

On this night, celebrate not just the end of 2011 and the start of 2012, but also two of the more decorated modern era writers in comic books. In fact, not just comic books, but modern literature as well. Neil Gaiman and Alan Moore have been responsible for some of the greatest stories in popular culture in the last 20 to 30 years: The Sandman, Watchman, V For Vendetta, American Gods, and so much more. Since this shin dig is a private party, you must join the Facebook page here to access the password to buy tickets. The exact address of the location of the party will be given upon completion of the transaction.

There are a lot of options to choose from when deciding just how to ring in the new year, obviously. If you’ve got young children, then most likely, your New Year’s Eve outing needs to incorporate something for the whole family. To which, we must point out this dazzling combo: beer, and macaroni and cheese. Do I seriously need to say more? Oakland’s Homeroom has multiple dinner options come the last day of 2011. Despite the later dinner event at 9pm having already sold out, tickets to the early dinner at 6pm are still available.

Going out and painting the town red requires plunking down a considerable amount of cash no matter where you end up going. If you’re looking for a crowd to party with without breaking the bank, hit up the Mighty off Utah Street, and welcome 2012 by dancing to classic ’80s tunes all night long. There’s no cover charge, so be advised to show up early. On top of that, there will also be a free champagne toast at midnight. You just can’t beat free.

In Bed with Fairy Butch Returns for New Year’s Eve 2012!

Gay, straight, transgender, or what have you, we all like to party and have a good time. If you’re in the mood to jump into 2012 by letting everything all hang out, and go absolutely nuts, Fairy Butch is your best bet. In Bed with Fairy Butch is definitely going to be an absolutely wild time.

What are doing for New Year’s Eve? Let us know! Follow us on Twitter and like us on Facebook to give us a shout. You can also stay on top of exciting events from around the world by downloading the eventseeker app for iPhone, Android or Windows.