Though it was probably a touch too loose and scattershot to win over the uninitiated, last Friday night’s Portlandia: The Tour at Mezzanine offered established fans an entertaining live look at the popular show and its two endearing leads.

The brainchild of Fred Armisen (Saturday Night Live) and musician Carrie Brownstein (Sleater-Kinney, Wild Flag), the IFC series is known for sending up hipster culture via its hilariously warped version of Portland—which it describes as a sort of haven for artistic, bike-riding, organic-eating, music elitist, intellectual weirdo types. As a big fan of the show and its creators, I looked forward to seeing what shape this would all take in front of a live audience. 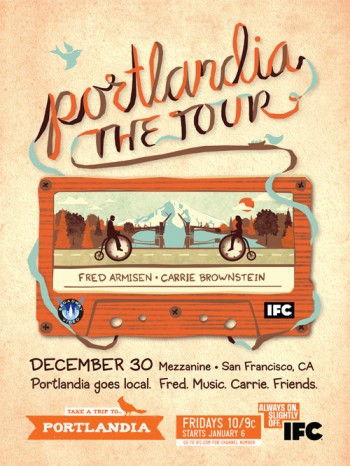 Embracing their musical backgrounds (Armisen was a touring drummer before landing on SNL), the two have been using opening bands at each stop of the tour. On this particular night, it was SF locals Thao (of Thao with the Get Down Stay Down), and Mirah. The duo played a (very) brief two song set, but did a great job establishing a fun vibe to start the evening. Armisen and Brownstein took the stage soon after and were met with a long round of applause from the sold-out crowd. They dove right into a timely bit about holiday gift card greetings, with Armisen disappointed with the impersonal nature of Brownstein’s to him (“Hey guy…”). It was a funny progression of loosely scripted banter that fully established the quirky chemistry and comedic timing that the two share together on the show.

Music, especially the clever original material, is a big part of Portlandia, and the live show was no exception. Brownstein picked up a guitar and Armisen a silly looking bass, and the pair launched into a version of the show’s slacker chic theme song of sorts, “Dream of the ‘90s” (“remember in the ‘90s, when they encouraged you to be weird? You could grow up to wanna be a clown. People went to clown school!”). In what would be one of several video sneak peeks from the show’s upcoming second season, an awesome rehash of the song, called “Dream of the 1890s,” hilariously pinpointed the modern hipster’s romanticism of the harsher, more difficult life experiences from eras such as the late-19th Century (“remember when everyone wore spectacles, grew mustaches, rode bikes everywhere and had to pickle all their food?”).

A couple of surprise guest appearances were randomly sprinkled in throughout the evening, including Dana Carvey belting out a strange, freewheeling take on “Santa Claus is Coming to Town,” and SF native/author Daniel Handler (aka Lemony Snicket) waxing philosophical on various pros, cons and observations of several of the city’s diverse districts. The guest spots were entertaining, but sometimes dipped into clearly underdeveloped and loosely structured stretches that came a little too close to falling apart at the seams. Still, they successfully added to the whole, “what’s gonna come next” vibe of the show.

Although I would have liked to see more sketches and characters from the show (the obnoxiously funny feminist bookstore owners did thankfully make a brief appearance), the show as a whole satisfied the Portlandia fan in me well enough. More than anything, it reconfirmed what I’d already hoped; that Armisen and Brownstein are just as down-to-earth, sharp and hilarious in the flesh as they are on television. I walked out thinking that the season two premier couldn’t come quickly enough.

Are you a big Portlandia fan as well? Let us know! Follow us on Twitter and like us on Facebook to give us a shout. You can also stay on top of exciting events from around the world by downloading the eventseeker app for iPhone, Android or Windows.