When I walked into The Forum at the Yerba Buena Center for the Arts for Dean Moss’s latest piece, Nameless forest, the dancers were already mingling with the audience, looking for people who would be willing to join them on stage for the duration of the performance. Sari Nordman, one of the dancers, approached my end of the bleachers and asked the person next to me if she would like to participate. She declined, and Sari’s inquiry passed to me. To my own surprise, I accepted.

Nordman led me to the stage, and the dancers and audience members arranged themselves into little groups, as if we were all at an awkward cocktail party. The performance had not “started” yet, so those on stage were chatting as well as those seated in the audience. Then the house lights dimmed, and the seated audience immediately hushed. We, however, were all still making small talk with one another. In that instant, I palpably felt that I was no longer an audience member; I was a part of the performance. All of us on stage had forged a community, or at the very least an understanding–we were in the world of the Nameless forest. 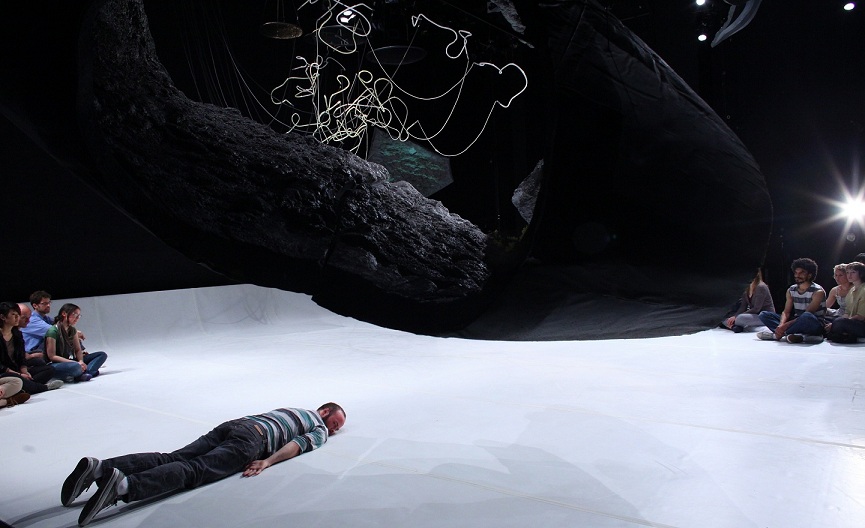 Moss worked with the Korean sculptor/artist Sungmyung Chun to create a set that enveloped the performers in an exploded torso, which is what shapes your perspective in the photo above. Pieces of the torso were suspended in the air, and images by Michael Kamber were projected onto one of the torso bits. The neon tubes in the middle of the stage, sculpted by Gandalf Gaván, looked like the spilled innards of the demolished being. In fact, throughout the entire show, I felt as if the performers were constantly spilling their emotional guts with the goal of getting the rest of us on stage to react–and that interaction was a huge part of the art that was being created. Instead of having actors portray emotions that evoke a response from a spectator, Moss and his cast of dedicated performers used us, since our expressions and reactions would not be scripted/practiced, but honest and spontaneous. 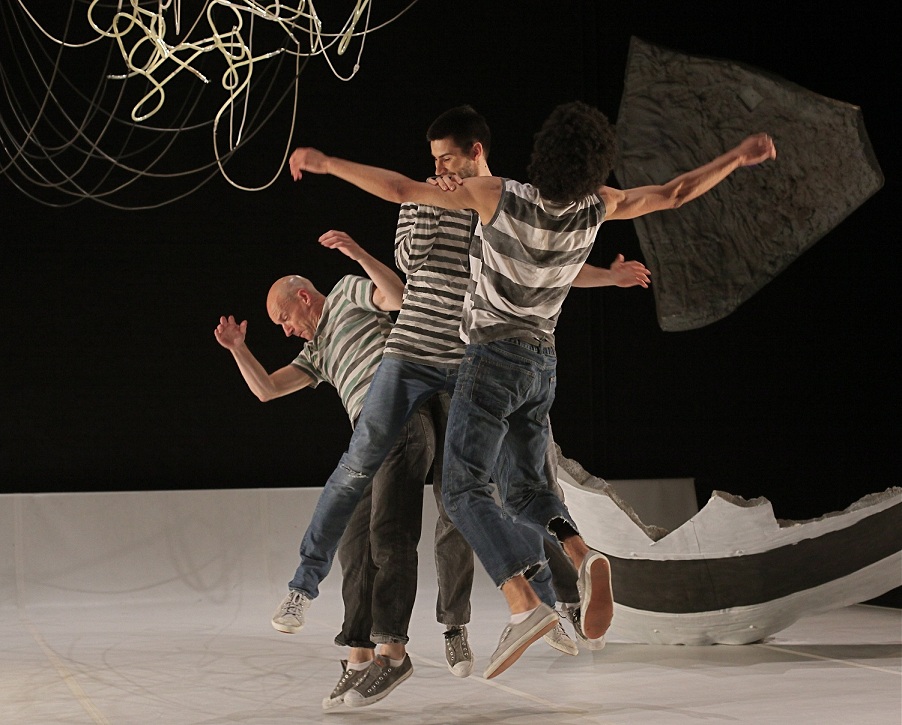 The dancers went through a barrage of emotions, from stoic to violent, subdued to maniacally happy. I sat there watching the dancers roll around in a lump, cheer each other on, have mock playfights and do myriad other things I didn’t understand. I wondered what we would be asked to do, whether or not I would comply, and what would happen if I didn’t comply. (Un)expectedly, since I had no clue what was going on, I wouldn’t move unless I was prompted to do so, and then I would do whatever I was led to do. At the same time, we all knew we could trust the dancers who were manipulating our movements. It was an odd experience.

What’s interesting was the degree to which the non-performers really were invested in the performance. Just watching the others, I got an idea of how simple and basic human interactions are, regardless of who’s watching. If a dancer smiled at someone, that person would automatically smile back. If someone told me to “Stay,” I would stay. If she motioned me to kneel, I would kneel. During the most impactful part of the performance, Aaron was completely nude and writhing on the floor, as if he were dying. He was cradled in the arms of two audience members in the center of the stage, and one of the other dancers simply said, “Be with him.” Watching them, you could feel that their conviction was real, and that they would comfort/protect this naked, vulnerable dancer. 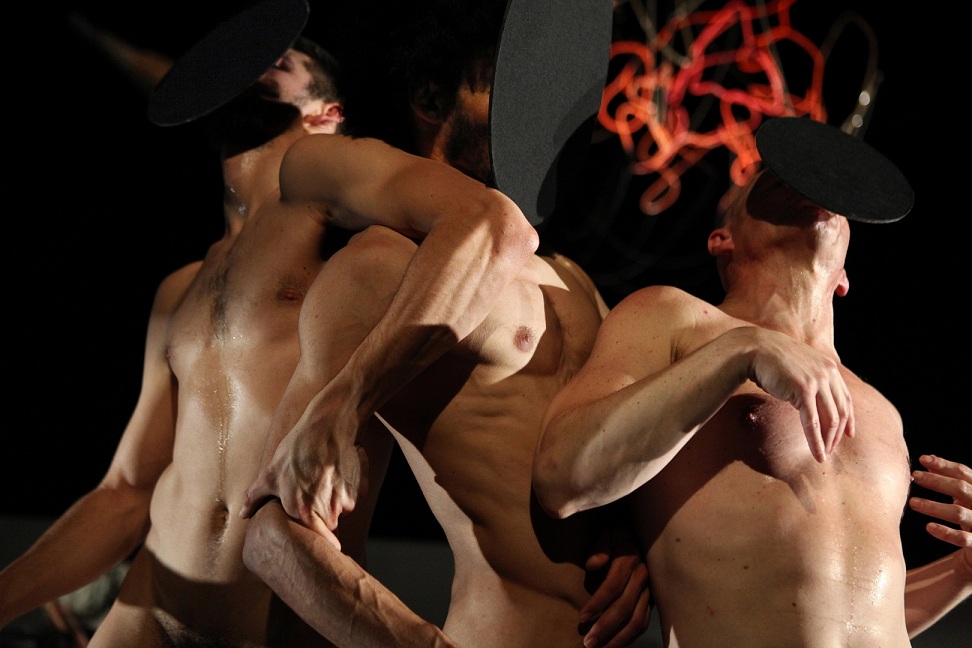 Towards the end of the performance, Kacie Chang interviewed some of the people on stage, asking them to tell the audience a little bit about themselves. Their answers were surprisingly involved, and as they were being questioned, the rest of us were stood up and positioned so that we were looking at the speaker with our mouths agape in a classic expression of surprise. Sari constructed my pose and my facial expression, so at this point, I truly felt like one of the performers. However, I was still intently watching what was going on and trying to take it all in. I was part of the performance and part of the audience at the same time.

To some degree, I wish I had been watching this show from the audience so that I would have a better understanding of how invested I, simply as an audience member, would have felt. Moss commented that a spectator watching another audience member on stage would automatically be more engaged in the performance, since the person that’s having all those things done to him is essentially an everyman. I honestly can’t say how “successful” the performance was in that regard. I only know that as one of the people who had been pulled on stage, I felt connected to the experience of this show in a way I haven’t been connected to performances before.

Did you see Nameless forest? Leave a comment below and let us know what you thought! Let us know what you think! Follow us on Twitter and like us on Facebook to give us a shout. You can also stay on top of exciting events from around the world by downloading the eventseeker app for iPhone, Android or Windows.